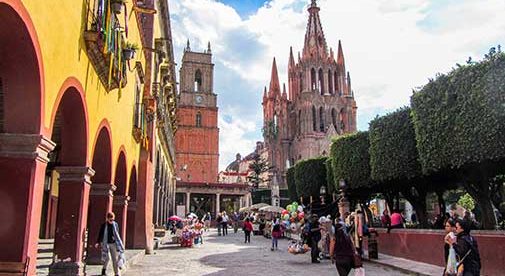 With its stunning architecture and thriving culture, San Miguel is the beating heart of Mexico.

I spent Thanksgiving here in Cabo.

The late afternoon breeze off the Pacific has the faint hint of cool air. A warm yet refreshing 82 F. The sports-fishing boats are moving across my horizon heading back to port. They leave a trail of white water on an otherwise deep-blue ocean.

This time last year my nephews visited and showed me what fun you can have here with a $20 snorkel. Stick your face in the water at the rocks that fringe Playa Santa Maria and a kaleidoscope of colors reveals itself. Yellow fish swarm, duck, and dive. Big flat fish nestle in the sand on the floor.

I golfed in Quivira on Sunday. From the cliff-top fifth green we watched a whale come up for air almost directly below us. As big as a submarine. Awesome and majestic. There’s so much beauty in the world to be thankful for. So little benefit to me to pick arguments with my neighbor.

It’s hard to believe that this is RETA‘s 13th Thanksgiving.

Everything is in flux.

Moments of great flux are the moments you could lose everything, make a fortune…or do well while sleeping at night.

Now is the moment to take some gains from those assets that have soared and put them somewhere that’s set to benefit from all this flux…somewhere we can buy cheap and generate strong yields.

In uncertain times…in all times in fact…strong yields tell one particular story. The demand for your real estate is real. People are willing to pay you to use it.

What was normal back in February is gone…gone for good. Work from home is here to stay. Not for everyone but for enough people to fundamentally alter the nature of our cities.

That’s why long-term rentals are so scarce in Tulum on Mexico’s Riviera Maya. That’s why I’ve gone from being the youngest person at parties in my community in Cabo last year to finding myself older than many of my neighbors today.

I can’t help with the pandemic and economic uncertainty (other than behaving responsibly). But I can help you find opportunities to profit and diversify. I can help you find stunning bolthole properties overseas at knock-down bargain prices. Eight months on from the start of this crisis and we’ve already had an amazing run…

There is much more coming…

There has never been a better moment to take a little of what you have at home and spread it around overseas.

First of all, a flood of more crisis deals is on the way. Especially in Europe. In Spain and Italy this crisis has been longer and deeper than I predicted. I had figured on big price drops on premium real estate and that we would find ourselves spoiled for choice on bargain bolthole properties.

The deals are going to be even better than I thought.

I’m sending RETA members their November issue of Real Estate Trend Alert. Inside I’ll give you my thoughts on how to play Europe’s crisis.

But the crisis is just one enormous driver of our profit opportunities from global real estate. The other is our group buying power. We have more sway and clout than ever.

The real juice of RETA membership has to be the off-market RETA-only deal. I have some outrageously good deals lined up.

Next up for instance…

This December I plan to bring RETA members a killer deal in the historic gem of San Miguel de Allende.

San Miguel is one of Mexico’s most beautiful towns. It’s a major center for the arts, the weather is close to perfect year-round, and this colonial gem is attracting well-heeled folks from the world…which means that with the right play we can seriously profit.

I’m set to bring RETA members the chance to buy two-bedroom condos from what looks like a discounted price of $167,800. I’m still negotiating the details but our RETA-only price won’t be far off that…certainly much less than retail.

I figure these condos will be worth at least $250,000 five years after delivery. That’s a serious gain, made all the bigger by getting in at a RETA-only discount.

This deal is coming fast… stay tuned if you’re a RETA member.

Is it only a matter of time before interest rates go negative in America?

Economists at the Federal Reserve are already making the case for negative interest rates and President Trump publicly advocated for them.

President-elect Biden’s big spending plans (including more COVID-19 aid and a $2 trillion climate investment plan) means he’ll likely favor ultra-low and even negative interest rates too, because they make it easier to borrow and spend.

This is a disaster for retirees hoping to live off the interest from their nest-egg. Yields are already microscopic, if they go negative, then your savings start disappearing even faster.

Some retirees are moving into stocks and other riskier assets to try and keep their dream retirement alive. But I believe there’s a better way…

I’ve been using ultra-low interest rates to buy real estate (even more so than normal!). This is affordable, high-quality real estate I can rent out and collect yields of 5% or more on. That’s two, three, four times what I could get from traditional income investments like treasuries, CDs, etc. Over time, I will also benefit from capital appreciation.

So instead of letting low interest rates punish me, I’m profiting from them.

And you can too. If you’re a RETA member you have access to my report on the miracle of leverage and where to look for it as part of Project Prosper.

I understand that one can become a Non-Habitual Resident (NHR) in Portugal and then pay much less in taxes to Portugal. That amount subtracted from the taxes one must pay in federal taxes to the U.S. The total tax bill is thus unchanged.

However, I have the impression that taxes in Spain, France, and Italy are higher than taxes in the U.S.; thus, one pays more in taxes to those countries and no federal tax in the U.S. (Oops. There are also state taxes in the U.S.). In addition, in some of these countries, there are wealth taxes. Do I have all of this right?

Can you get someone to summarize the situation?

So, if you are a U.S. citizen living abroad, this means that you must file a U.S. federal tax return and pay U.S. taxes no matter where you live at that time.

However, that doesn’t mean you’re liable for double taxation. For instance, in the U.S. tax code there is the Foreign Earned Income Exclusion (FEIE). It’s adjusted annually for inflation, but in 2020 it permits expats to up to $107,600 of income earned abroad from their U.S. tax obligation.

There are also deductions you can make on housing expenses. And you can reduce your tax obligation further if you qualify for the Foreign Tax Credits, which are intended to prevent double taxation.

However, I advise you speak to a tax advisor to be clear about your obligations.

Uruguay: The Safe Haven You Should Pay Attention To0