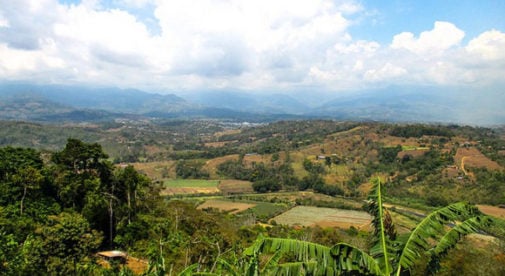 If this picture is your idea of an exciting afternoon, I suggest you save yourself some time and stop reading now.

(If this isn’t your scene, continue on below…)

So, why am I showing you a picture of a dull big-box storefront?

Because it’s precisely not what you should expect from our Real Estate Trend Alert deal this week.

In other words, the deal that’s about to open exclusively to RETA members is an incredibly rare thing…

In the Southern Zone, wildlife is abundant and colorful…marine life is rich… Even in comparison to other parts of Costa Rica, which are brown and arid in the dry season, the Southern Zone is always lush.

It’s why more and more people are coming here, and why millions more are set to discover just how special the Southern Zone is.

Because so much of this region is protected land, it has remained boutique and up-market…and it’s going to stay that way.

To the south, the Corcovado National Park is home to jaguars, squirrel monkeys, and endless opportunities for wildlife spotting. If you’re lucky, you’ll see tapirs on the beach. To the north of our opportunity is Manuel Antonio, probably Costa Rica’s most famous national park.

Our opportunity is to own one of 18 villas—each with a small pool—nestled right in the middle, just at the edge of Ojochal. Our members-only price starts at just $218,000.

And because this region is so protected, there remains a critical shortage of rentals to serve its growing appeal. That’s a big plus for investors like us is this. Building is tightly restricted, primary forest is sacrosanct, and our opportunity is tightly sandwiched between two national parks.

That’s why, with this rare deal, we can tap into huge demand that could easily mean a yield of 13%.

But like I say, this deal isn’t for everyone…

On my first trip to the Southern Zone, way back in 2007, I was (as we say in Ireland) gobsmacked.

Everything was in the brightest technicolor. Vivid green mountains dropped almost vertically to a sandy coastline washed by blue ocean. Flocks of macaws, a flash of scarlet and blue, flew past. Toucans with their orange and yellow beaks perched in treetops.

It was exotic, different. Monkeys called out in the tree canopy…hummingbirds whirred past…tiny lizards basked in the tropical sun.

On every trip back, I’ve gotten a taste of the thrill of that first trip. The Southern Zone is a unique spot, different to anywhere else I’ve been on my travels. Much of the land is in national parks and reserves. It’s packed with wildlife, amazing beaches, and plenty of space to stretch and escape the crowds.

Moreover, it might look frontier, but you won’t rough it. There are banks, beauty salons, spas, a hospital, even hardware stores. You can dine in style—this place is gaining a reputation as the foodie capital of Costa Rica. And the expat community is active and welcoming to newcomers.

Surprisingly, I have come across folks who don’t share my enthusiasm for the Southern Zone. So, here are three things you might not like about it…

This is wildlife central, an incredibly biodiverse part of the world, and home to some exotic wonders. You’ll see parrots, toucans, hummingbirds…spider monkeys, anteaters, tapirs…huge electric-blue morpho butterflies. And you won’t even need to go on a wildlife tour. Nature is all around you in the Southern Zone, and the wildlife will come to you.

In the Southern Zone, wildlife is everywhere.

Ronan says: There really is nowhere in the world like the Southern Zone. But natural beauty aside, the restrictions on development also create an incredible opportunity to profit.

Thanks to all the national parks and other untouchable areas, not to mention government restrictions on what you can build and where, there are no large hotels, and nowhere near enough high-quality rentals to meet growing demand.

That sets us up to create huge rental profit. With our RETA-only deal, we are set to tap into huge demand that could easily mean a yield of 13%.

If you’re a RETA member, get all the details here.

Don says: Hi Ronan, I just got back from Tamarindo bay. I was looking at boutique hotels to purchase. I was also trying to figure out the long-term growth in the beach town.

Have you been there?

Do you think it’s still a good place to invest?

It seems it’s still being developed. However, it seems pricey.

Ronan says: Hi Don, I’ve been there on several occasions, although not in the past five years. It never made the cut of places I thought made sense to invest. Expensive, water issues…in the early 1980s there was opportunity there (even in the early 90s)…but those days have passed.

That’s not to say someone who knows what they are doing can’t make a go of a boutique hotel there. And, given current situation there could be great opportunities from motivated sellers.

Their Problem…Your Opportunity in Costa Rica

Move-In-Ready Homes in Sicily from $84K