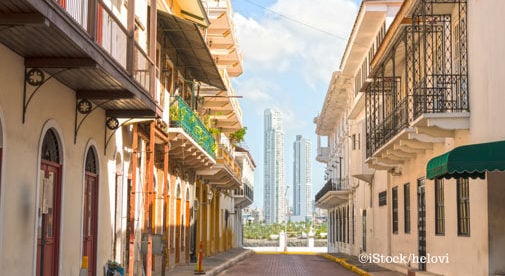 Panama City has been my base since January 2007. Prior to that my shortlist included Costa Rica, Mexico, Nicaragua, even Roatan, Honduras…but I chose Panama City.

I made the right choice. It’s safe and stable and the weather is tropical and gorgeously warm all year round. The airport’s a short hop from the city, and it’s got great flight connections to the places I travel to.

The healthcare and infrastructure are First World. I’ve got all the shopping, dining, and entertainment options I could ever want. And the city’s a true cultural melting pot, so I feel very comfortable here.

If you’re thinking of buying a home in Panama City, here are three neighborhoods to consider:

This is Panama City’s historic district. It was abandoned, run down, and unsafe for decades. Government tax incentives introduced in 1997 kick-started gentrification. Derelict buildings were gradually restored and transformed into residential condos, boutique hotels, and trendy eateries. Today, it’s a tourist must-see and hipster haven, where candy-colored buildings sit around leafy plazas, visitors flock to sights such as the San Jose church with its golden altar…and folks gather in the evenings to eat, bar-hop, or people watch.

Gentrification brought a lot of upside to this tiny neighborhood. The downside: Real estate prices soared. You’ll pay around $300 per square foot for a restored condo in Casco. That’s the top end of prices across the city. The lowest priced condo I found listed at $270,000—for 580 square feet. And you won’t see good returns if you rent your Casco condo out; they typically run around 4.5% to 5.5% gross. That’s why I’d recommend Casco as a place to buy a home only if you’re going to live here full time. And if you do, look for a condo that’s not too close to a busy bar or restaurant. Try to get one with bedrooms away from the street…to escape the noise from late-night revelers.

I didn’t realize just how cool this neighborhood was until I visited a friend with a home there. “Cerro” means hill, and that’s exactly what Cerro Ancon is: a lush green hill. Most of the properties here are single-family homes, sometimes split into apartments. The feel is relaxed and suburban. It’s very appealing to families and those who want somewhere that’s close to the city, but a little quieter, with plenty of outdoor space.

Many homes feature large, covered patios and terraces, surrounded by palms and trees, where you can sit with a cool drink and watch the wildlife. From my friend’s terrace, I’ve seen parrots and toucans; Geoffroy’s tamarins (a tiny monkey found only in Panama and Colombia); coatis (similar to a raccoon, but so much cuter), and sloths. It’s hard to believe you’re so close to the city, but it’s only a 15-minute drive away.

This is a neighborhood where you can buy a home laid out as two apartments and use one yourself while you rent the other out. A 2,200-square-foot home on the market for $395,000 has a two-bedroom, one-bathroom apartment upstairs and a one-bedroom, one-bathroom downstairs. You could rent the one-bedroom apartment for up to $750 a month. This is a good way to generate an income if you’re retiring or living in Panama.

This downtown city neighborhood has everything you need or want on its doorstep: shopping malls, restaurants, nightlife, schools, and a huge in-city park, Parque Omar. Friends go to the park for early-morning yoga classes, to jog, or to walk their pets.

Coco del Mar escaped the crazy pace of real estate development that changed some of the city’s top locales over the last 15 years. On Avenida Balboa, one of the city center’s top addresses, for example, high-rise blocks, five-star hotels, and residential condos all shot up, bringing in a slew of owners, renters, and guests.

Coco del Mar took a back seat while this was happening. Its wealthy residents didn’t want change. They wanted to keep this exclusive neighborhood with its multi-million-dollar homes all to themselves. They fought zoning changes that would have allowed high-rise blocks. But in late 2013, the zoning finally changed, triggering a wave of condo development.

Today, the new towers being built here are all remarkably similar: high-rises with very large two-bedroom, two-bathroom condos with hefty price tags, from $350,000 up. But just recently launched, a new option will appeal to the well-heeled professionals that want to live here…luxury two-bedroom condos in a mid-rise tower, at very appealing prices.

Retire in Comfort & Convenience in Panama