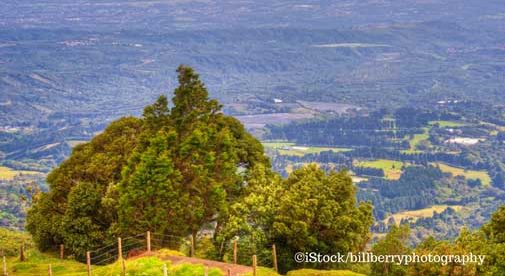 “When the time is right, things just fall into place. And you just go with the flow.” That’s what Dale and Jessica Hill said about their unanticipated retirement move to Costa Rica.

They had come to visit friends who had the “crazy” idea to retire to Costa Rica three years earlier. Dale and Jessica were shocked at the great life their buddies had built in the Central Valley region. They spent a blissful week in what they described as a “peaceful paradise.” Then Dale dropped the bomb, “I have not seen one single stressed-out person; even the dogs and cats are serene—we’re moving here, too. Find us a place. We’ll be here one year from today.”

They actually came back a month later to look at some properties that their friends had heard about in the area. Because the locale is off the beaten path, in the mountains in the center of the country, they were afforded incredible views—and incredible prices. They settled on a six-and-a-half-acre piece of undeveloped mountain land that backs up to primary forest behind and opens on to panoramas of distant volcanos and villages in the foothills on the front side. Best of all, the price was less than $58,000. They closed in no time.

Next on the list was building a house. They need to sell their residence in the States before having enough money to build their dream home here. So they decided to have a small guest house built first…which they could fund before selling their home. That way, they could live in the guest house while overseeing the construction of the main house. But the question was, how to accomplish that when they weren’t yet living in Costa Rica?

They found the answer in prefab construction. They met with the architect of a prefab company who designed the 770-square-foot guest house based on the rough sketches the Hills had submitted.

They were excited when they found out the job would be completely turnkey and move-in-ready just four months from signing off the final design…and that the whole construction was only going to cost $42,000.

The plans have all been approved and construction starts next month. For $100,000 they’ll have a six-and-a-half-acre parcel of nirvana with an extremely modern and comfortable home waiting on their arrival.

A well-known Costa Rican pool company has already given them a proposal for a 10-foot x 33-foot lap pool for $24,000. The pool was Jessica’s only requirement and they plan to build it as soon as they move.

The Hills are so pleased with the prospect of their new guest house/temporary house, that they are planning on using the same company to build the main house after they arrive. Dale says, “Imagine what kind of home we’ll have overseas with a budget of $100,000.”

10 Amazing Things to Do in Costa Rica