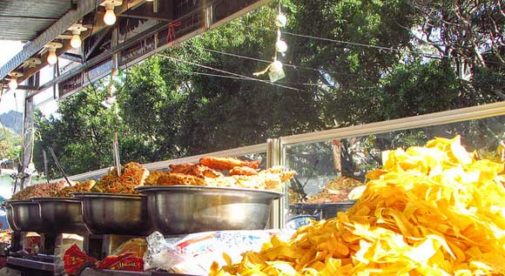 The best thing about your diet in Nicaragua is that you are eating healthier by default. GMO is not allowed and many farmers use homemade herbal pesticides because it’s much cheaper. It’s strange, because my friends and family in the U.S. and Australia go to great lengths to find “grass-fed and finished,” “free-range and uncaged,” and fruits and vegetables that haven’t been injected, painted, and waxed. No problem in Nicaragua. We don’t have that stuff. Everything here is how it used to be in the U.S.—fresh, unadulterated food.

And it’s much cheaper too. I can live on a food budget of $25 a week when I’m eating mostly produce. But fish is the kicker—last summer I saw frozen red snapper in New York for $34.95 a pound! Here I pay $3 for a freshly-caught-that-morning whole red snapper, and for an extra 50 cents they’ll clean and scale it for me. Eggs are from someone’s backyard for $1.65 a dozen.

A good cut of beef from a cow who roamed the meadow goes for $3.92 a pound. My daughter, a nutritionist in San Diego, agrees that the food we get here in Nicaragua is much healthier. For the same things I buy here for peanuts, she has to pay an arm and a leg!

Generally speaking, the food in Central America is quite similar, with each country having its “special dishes.” Beef, chicken, pork, or fish, with beans and rice, fried plantains, and a cabbage salad are the norm for the locals. But that’s where the similarity stops. (Incidentally, each country has rice and beans, but in Nicaragua the dish is called Gallo Pinto.)

Nicaragua has some interesting meals, but you might not find them in restaurants. Many of these traditional dishes involve special family recipes that are handed down from generation to generation. The best way to sample this food is to go to a local food fair, especially during the Patron Saint days, Christmas or Semana Santa (Easter).

This is one of the most popular “typical” meals. Consisting of cooked yucca (cassava), cabbage, tomato in a vinegar-chili sauce and chicharron (fried pork skins) served in a banana leaf, this dish is found all over Nicaragua. However, those “in-the-know” say the best Vigorón is in Granada.

This exquisite dish combines beef, onion, garlic, vinegar, sour orange, ripe plantain, and yucca. The trick is to cook the ingredients just long enough to blend the flavors a little, but still taste the original flavors of each item as well.

Almost all Latin American countries have their own version of a tamale and Nicaragua is no exception. This heavy meal combines meat (any kind) with onion, garlic, tomatoes, potatoes, rice, green or red peppers, and sometimes raisins, olives, capers, and achiote—a pungent orange spice that excites the flavor—inside a corn covering, wrapped in a banana leaf. You’ll find this treat every weekend in Nicaraguan homes—eaten with a steaming cup of coffee.

Here’s one for the brave. The soup is prepared with onions, salt, garlic, iguana, and corn. When the meat is soft enough, it is chopped up and iguana eggs are added into the soup with a sauce of green chili, onion, and tomato.

Yes, soup is popular in Nicaragua. And this one is the favorite of many. Cow stomach soup—believe me—it’s a whole lot better than it sounds. The ton of ingredients—yucca, quequisque (a vegetable I have never seen before and can’t explain), chayote (almost like a squash), red or green peppers, corn, rice, salt, mint, bicarbonate of soda, onion, banana, sour oranges, garlic, lemon, cabbage, and achiote—make this soup a winner!

This dish has many of the same ingredients as the other dishes—but has its own unique flavor. With a fatty piece of beef, onion, red or green pepper, garlic, salt, corn flour, sour orange, mint, and oil or pig fat, this meal will satisfy the heartiest of eaters.

If these dishes do not excite your palate enough, you can find restaurants that serve wild game. It’s not unusual to have boa (yes—the snake!), armadillo, agouti, or wild boar. And don’t be surprised if you encounter Viagra soup—which is really bull brain and testicle soup. Don’t knock it ‘till you’ve tried it!

Many people say that Nicaraguan food is too bland. But they just haven’t found the good stuff yet. It’s here, it’s great, and it’s healthy!