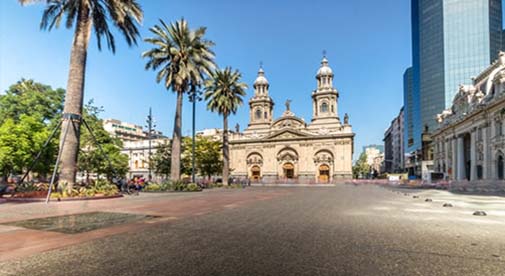 Santiago, Chile’s capital and largest city, is an hour and half away from San Vicente de Tagua Tagua. ©iStock/diegograndi.

As a bookkeeper, Vickie Chapman understood cold hard numbers better than anyone. For instance, she knew that where she lived in California’s San Fernando Valley, a three-bedroom house could easily cost $700,000. She knew that utilities and taxes would eat thousands of dollars of income each year, and that continuing her life there would amount to a relentless struggle to keep her head above water. As a bookkeeper, she knew better.

“My financial situation had changed, and it was a lot to manage on my own,” she says. “But my youngest son had just graduated from high school, so I said, ‘What the heck, I can retire early.'”

At age 54, Vickie’s plan wasn’t just to retire early, it was to retire somewhere her checkbook would have more clout. So, along with her partner, Claudio, she packed up her American life and in 2018 moved to rural Chile.

Claudio was born in Chile but lived in the U.S. for almost four decades running a restaurant. After they decided on early retirement, he sold the restaurant and started scouting for a place to live. “As soon as he got here, he decided to buy some land,” says Vickie. “He bought an acre of farmland and started building a house.”

The couple are living in San Vicente de Tagua Tagua, about an hour and a half from Santiago. The area resembles parts of California’s Napa Valley, with picturesque tree-lined streets winding their way through the residential areas and sprawling vineyards hugging low-lying hills in the distance. “The closest big city is San Fernando,” says Vickie. “You can go to the mall there and get everything that you would need.”

The climate also compares to Napa, with a four-month warm season from November to March with average daily highs in the 70s and 80s.

To keep some cash flow, Vickie returns to the States during tax time to pick up bookkeeping work. But she can also earn by freelancing online from her home in Chile whenever she likes. “Living here, I feel like I’m on an extended vacation,” she says.

Vickie and Claudio are also planning to create income from 220 lemon trees they planted on their property. “It’s going to take two years before they actually produce fruit, but once they do, they will produce fruit twice a year. And lemons are pretty profitable.”

When making the move, they shipped half of their belongings from the U.S. in a 20-foot container. Vickie also shipped 30 boxes and Claudio was able to ship their car because he is a returning citizen. The total price tag for all their shipping came in under $20,000.

Everything else they sold. “I had a really nice sports car that I had to sell before I left. It felt great. It was very empowering to be able to quit my job, give up my car, and have no expenses and less responsibility. I have a little more than $1,000 a month coming in and I’m doing fine.”

Vickie and Claudio love their new life. “We have fresh hot bread delivered to our house every single day at three o’clock. This lady comes around in a little van and it’s $1.50 for four loaves. (That’s kind of what got us into trouble with weight gain!)

“And everybody sells stuff. Like fruit, big empanadas, or honey. There’s all kinds of stuff. Everybody’s selling something,” she says. “And, in two years’ time, we’ll be selling our own fresh lemons.”

An Affordable Retirement in Santiago, Chile

Everything You Need to Know About Chile And More