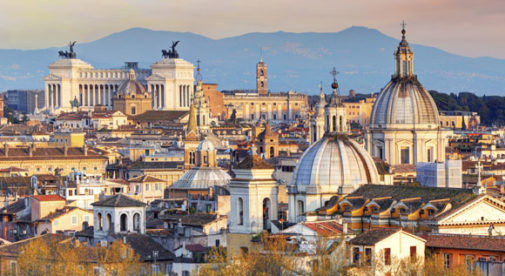 There’s a statue in Rome whose history is of feuding artists.

The fountain—called The Fountain of Four Rivers—is located in the famous Piazza Navona. When it was commissioned by the pope in 1651, the story goes that the project was first given to an artist named Borromini and then stolen away by his arch nemesis, a man named Bernini.

The fountain features four god-like statues that represent the four great known rivers of that time—the Nile, the Ganges, the Danube, and the Rio de la Plata. And all four of the statues seem to be turning away from the baroque Sant’Agnese church across the street…a church designed by that rival artist, Borromini.

They say the gorgeous fountain’s design is a result of the bitter rivalry. Of course, a little research shows that this is actually a myth.

The pretty baroque church that Borromini worked on was actually constructed after Bernini’s fountain. Their rivalry may well have been real and bitter, but these particular statues’ commentary on Borromini’s work was invented after the fact.

And honestly that’s one of my favorite things about Rome. Not just its true histories, but also its myths, some of which still endure today, passed along like gossip (“did you hear about that old scandal, Bernini? Even his art is a critique of his rivals!”).

I was first introduced to this mythology on a bright, sunny day in early March—warm enough for a light jacket. I was in Rome for a long weekend and after lunching with an expat friend in the lively Jewish Ghetto, I was delighted when she took us (a small group of women writers all in Rome for an event that weekend) on an impromptu tour of her favorite Roman quirks.

She took us to the fountain and the church. She walked us through the ghetto. And then, of course, we wove our way down a deceptively quiet street to her favorite Roman ice cream shop, Gelateria del Teatro, where the artisan gelato is fresh crafted with unusual ingredients like rosemary.

In all, it was a perfect day in Rome—one full of sunshine, laughter, Old-World gossip, and, of course, gelato. It’s how you could spend every day in this richly cultured, intriguing city.

And, contrary to conventional wisdom, this capital city is affordable. Many look at the most expensive real estate—like a recently listed $2.33 million, two-bedroom apartment boasting unobstructed Colosseum views—and conclude that Rome is out of their price range. But look around and you’ll find a pied-a-terre in the desirable Trastevere neighborhood listed in the $300,000s. Go deeper into Rome’s suburbs and you can pay less than $100,000 for a one- or two-bedroom apartment.

Of course, you don’t have to buy. Rent-wise, a small furnished studio could cost as little as $600 a month.

The history, conversation, and sunny days: Those are for free.