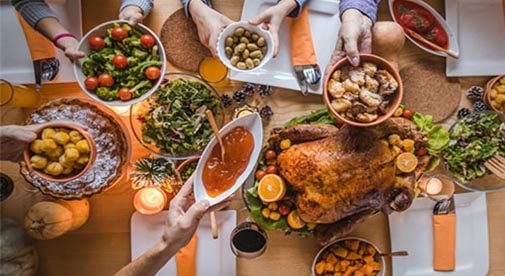 Asparagus soup with tarragon and goat cheese…roast turkey with oyster stuffing…delicate little pearl onions in cheddar cream. It’s a Mid-Atlantic-style Thanksgiving feast. And it’s being served up in Panama—a place where expats and locals enjoy coming together for this tradition from up north.

I look at the elegant menu and see that there will also be giblet gravy and cranberry sauce and “pumpking pie”—oops. One of the hazards of living in Panama. Spelling mistakes on English-language menus are common.

New Yorker David Henesy, owner of the restaurant that will be serving this feast, sighs, then laughs. “Overcoming an obstacle overseas can be an uplifting experience,” he says.

Of course, there are plenty of things he loves about Panama, his adopted home of many years. He appreciates the ease of travel to other countries—Panama City‘s busy international airport offers a long list of direct and connecting flights to cities all over the world.

Best of all, though, are the people, and the many wonderful towns to explore. “As Anthony Bourdain said, if you want to get to know the food of a place, explore and get lost. Go north or south, to either of Panama’s coasts, and you find subtle, lovely dishes. Panamanian food is extraordinary. It’s not what people generally think—fried dough and whatnot. The number one selling dish on our regular menu is local: Corvina fish with yuca, lemon, and culantro—an herb similar to cilantro.”

David is a passionate advocate of the local food scene. “I have a serious optimism about Panama today. It has everything you could possibly need. And yet here you can be a big fish in a little pond.”

That’s exactly what David is—his restaurant, La Posta, became one of the capital’s top fine dining establishments almost as soon as it opened 14 years ago. “And it’s still going strong,” he says.

David’s love affair with food started at an early age. A former actor—you may remember him from the TV program Dark Shadows (1966-1970)—he started cooking for his fellow cast members when he was about 11 years old. And it soon became more than a hobby. Tired of waiting to get hired by others, he saw that the food industry offered plenty of opportunities to be his own boss.

So, David left acting behind and took control of his own destiny. After opening successful restaurants in New York and Cartagena, he found himself “looking over the water” from Colombia to the bustling little hub of Panama.

“Panama was this burgeoning place of opportunity,” says David, adding that he has since been able to build strong customer bases in both the Panamanian and expat communities. And as it turns out, both bases are hungry for traditional Thanksgiving meals this time of year.

“At Thanksgiving I crave my grandma’s food, so I model her traditional recipes. She made cornbread stuffing, string beans with bacon, yams with marshmallows.”

David’s lineup for La Posta is very similar. It’s a menu that features comfort food, albeit with the fancy presentation that his customers love. And it’s a menu on which local ingredients like camote—a tuber similar to those traditional yams—will shine alongside imported goodies like oysters.

Though this year’s Thanksgiving falls on Nov. 28—Panama’s Independence Day, meaning that he will have to pay staff extra—David says it’s absolutely worth it. La Posta has never failed to serve a special Thanksgiving meal…and customers never fail to fill the restaurant.

We’re Downsizing to an Affordable, Stress-Free Life in Tropical Panama