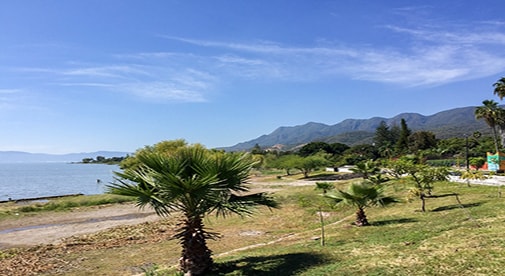 Ajijic and the area surrounding Lake Chapala has attracted a large community of North American expats.

Bonnie Raniewicz and Jai Segal fell instantly in love with Ajijic the moment they landed in the magical Mexican village in the fall of 2017. The friends and business partners—who had been living in Upstate New York and Florida, respectively—shared a similar life vision, which focuses on health, community, and being surrounded by beauty. And they found it all in Ajijic.

Bonnie, 60, and Jai, 72, came to Ajijic with the intention of starting a business that resonated with their values and spiritual beliefs, and were open to what would reveal itself to them.

Shortly after their Ajijic arrival, they met with a realtor, who showed them photos of a villa for sale, which was positioned alongside a mountain with a splendid view of Lake Chapala.

“As soon as we saw the photos,” says Bonnie, “we knew we had to visit the place. Our goal was to start a business together that we would both enjoy, and figured that owning an inn could fill that slot. So many ideas about what we could create with that inn flooded us all at once—we were sold on buying it.”

All it took was an overnight decision for them to sign the papers and to become the new owners of Villa del Angel, a decision that turned out to be perfectly aligned with their vision.

At first, Jai was skeptical about moving to Mexico. The pair had also considered places like Costa Rica and Bali. However, Bonnie was able to wean him into the idea of at least giving it a try.

“Once we were introduced to that community, we knew that we were meant to live in the Lakeside area,” says Bonnie. “From that moment on, everything seemed to fall effortlessly into place.”

What ultimately drew Bonnie and Jai to take over Villa del Angel was its sheer beauty. With the breathtaking views, it had everything they dreamed of, along with an area where they envisioned building a yoga studio and conference room.

“Once construction was completed, the space became available for yoga classes, weekend retreats, and community fundraisers—all of which we had,” says Bonnie.

While living in Florida, Jai worked as a permaculture and green business professor. Using his skills, he helped turn the Villa’s property into lush gardens, and will soon be adding a permaculture garden.

Bonnie doesn’t miss living in New York. She wholeheartedly believes she has found her community, her work, and her place to eventually retire. And Jai feels exactly the same.

“I’m loving my spiritual community and enjoying the deep friendships that I’ve made,” says Bonnie. Besides Ajijic’s splendid weather and tropical beauty, I love the fact that there’s always lots happening in the village that I can engage in.”

Bonnie and Jai adore hanging out at their villa, where they can sit quietly in the meditation areas, take a dip in the swimming pool, and enjoy the authentic Mexican décor, 12-foot ceilings, hand-carved stonework and stunning architecture. Best of all, from their deck they can take in the expansive view of the lake and mountains.

“The beauty of Ajijic cannot be summed up in just a few photos,” says Bonnie. “You simply have to see it for yourself.”

50 Ways To Make Money In Retirement

How A Vacation Turned Into A Freelance Career In Mexico