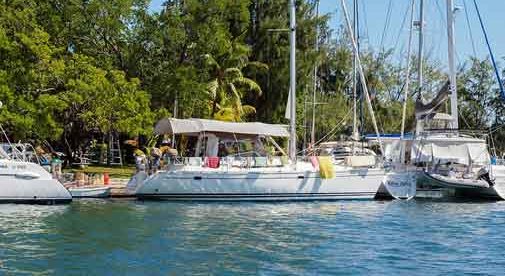 Learn more about Honduras and other countries in our daily postcard e-letter. Simply enter your email address below and we'll send you a FREE HONDURAS REPORT: Island-living at an Affordable Price in Honduras.

When Marilyn Northagen Poirier gets a craving for seafood, she doesn’t put it on the grocery list.

She can count on Marvin, a local fisherman, to come by her house on Roatán’s Calabash Bight (bight being “bay” in the local parlance) early as he’s heading out to sea to take her order.

“He free dives for lobster. I make lobster cakes instead of crab cakes,” says Marilyn, a North Dakota native. “Lobster is cheap. So is snapper. I told him one day I wanted snapper. He came back with four big snappers. And I had just bought five lobsters.”

It doesn’t get any fresher than that.

Marilyn lives with her husband, Alex Poirier, who’s a real estate buyer’s agent. They are near Oak Ridge, a traditional fishing town on the quieter and more sparsely populated east side of the Caribbean island of Roatan, off the northern coast of Honduras. Cruise ship goers and most tourists stick to the west side of the island. The couple live among a mix of expats and native islanders.

The home, an airy one-bedroom with a large deck and doors and windows that open to admit the cooling breeze, is whimsically decorated in an island style with a strong nautical theme. The place is adorned with Marilyn’s artwork as well; she’s a painter and interior decorator who is officially semi-retired but stays busy with commissions from clients. It’s something she loves doing.

“We both came from big homes, and we enjoyed getting rid of all our extra stuff when we moved here. It’s a simple life. It has one bedroom, one bathroom. We have air conditioning, but we’ve never used it. We have the perfect breezes with the trade winds coming,” explains Marilyn.

The property is accessible by boat only. The couple have jokingly named their home the Calabash Bight Yacht Club—their sailboat is docked out front.

The couple uses the boat for trips to other nearby islands or cruising around, and a skiff for getting to their parked car on shore when they have to run errands elsewhere on the island. The covered deck of their home is the ideal place to enjoy a meal—and the view—any time of day. The couple recently put in a small pool to cool off on hot days. To the side is Marilyn’s garden.

“I’m growing heirloom tomato plants, peppers, fennel and other extraordinary things,” says Marilyn, who adds she’s had to take care to guard against the salt air.

Marilyn notes that shopping has improved substantially in the time she’s lived in Roatán. A large supermarket, Eldon’s, carries plenty of products from the U.S. and elsewhere, including good quality Chilean wine for under $10 a bottle.

“You can get beef from the U.S., but the Honduran beef is good,” says Marilyn. “It’s very lean…healthy. And it’s good for you because it’s not shot up with all those hormones and antibiotics.”

Mondays are a high point for Marilyn and her friends. They usually head to a little-known beach—a place without tourists—with coolers of adult beverages, and have a barbecue with swimming, volleyball, and just having fun. It’s called “Mondays Don’t Suck.”

“One of the things I love about Roatán is that I feel that you don’t have the social and economic barriers that keep people apart in the U.S. Here everybody is friends, and we can rely on each other,” says Marilyn.

Learn more about Honduras and other countries in our daily postcard e-letter. Simply enter your email address below and we’ll send you a FREE HONDURAS REPORT: Island-living at an Affordable Price in Honduras.