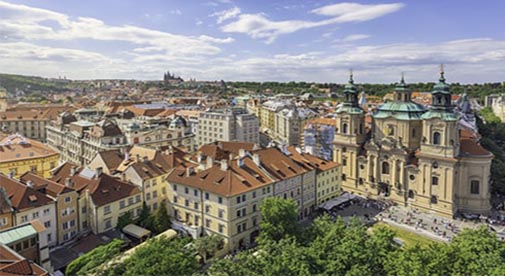 What a glorious day to live in Prague. At Letna Beer Garden—on a high, leafy bluff looking down on the red-roofed Old Town just across the Vltava River below—families, lovers, and friends are drinking beers, playing cards, and soaking in a touch of unexpected warmth. Winter claws its way toward the city, but for now…contentment.

Meanwhile, I’m reading that back home in America, a new survey shows what a bunch of old surveys already showed: Saving for retirement is the leading source of financial stress for Americans. Who knew?

The only new fact is that the average worker today has saved $152,000 for their Golden Years…and that the average retiree is spending $46,000 a year. No need to do the math. Just eyeballing the numbers tells you this won’t end well for anyone expecting 20 or 30 years of traveling or golfing—or, you know, breathing and eating—after a career punching time clocks.

Though I often expand beyond the money side of retirement here in Fund Your Life Daily to, instead, focus on pursuing a richer life, the reality is that the encore of life ain’t cheap.

Actually, let me rephrase: The encore of life that most of us expect to live in America ain’t cheap.

Healthcare in the U.S. is more expensive than anywhere else in the world (though, oddly, nowhere near the top in efficacy). Transportation is more expensive than most places globally, largely because tooling around most U.S. cities necessitates a car and all the associated costs of gas, repairs, and insurance, while lots of other places across the rest of the world have highly developed, sophisticated, and affordable public transit options. And typical daily costs for expenses such as food, internet, mobile phone and whatnot are generally much pricier in the U.S. (and often of lesser quality).

I’m not bagging on my homeland. Just objectively reporting demonstrable facts to make my point that life in America is expensive and won’t be any less expensive after we reach Social Security’s Full Retirement Age. Our escalating costs are baked in. And if savings cannot afford lifestyle, well, then, the way I see it we have two options:

Given that I left the U.S. for the Czech Republic, I’m particularly fond of the overseas element in Option 2—and particularly if you can combine it with Option 1. Nothing against America, but life in many places abroad is so much less expensive that even the modest, average American nest egg of $152,000 will stretch so much further.

Can’t afford beach living the U.S.? You absolutely can across a large stretch of Central America, parts of South America, Southeast Asia, even parts of southern Europe. Worried about healthcare expenses in the U.S.? Too many places to name around the world offer high-quality, Western medicine at prices so affordable you can pay for them out of pocket and not feel a pinch. Thailand, for instance, just picked up honors as the sixth-best healthcare system in the world, yet its costs are mind-blowingly lower than you’ll find in the U.S.

And daily expenses…you can cut costs for food, housing, transportation, and healthcare by 50% or more overseas, leaving you plenty of cash to live a richer, fuller life.

Here in Prague, I have zero auto expenses because the public transit system—trams, subways, and buses—is so extensive and efficient that I can get anywhere in the city in 20 minutes or so. The price for a one-year pass: $155.

My food costs for groceries and eating out (which I do five or six times a week) are $460 a month. My health insurance—fully Western, uber-modern, no out-of-pocket costs or deductibles—is about $1,500 a year for a Cadillac plan. My apartment is definitely a splurge…775 square feet across two floors, at the top of a fully modern, remodeled building, with a balcony overlooking a quiet courtyard six stories below, in one of the city’s most hip neighborhoods. Including utilities: less than $1,300 a month (and I could reduce that to well under $1,000 for the same quality if I chose a different section of the city).

…well, at that point maybe you’ll remember there are other places on earth where you can live a fuller version of your life for far fewer coins.