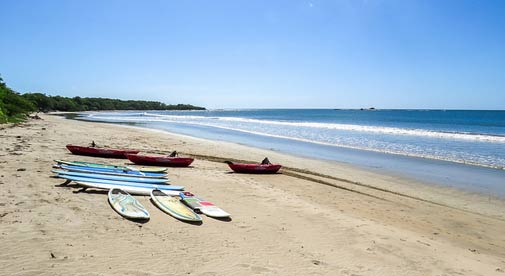 Mike Clifford didn’t have to travel too far from his last job to his new home in Langosta, the quiet community next to Tamarindo on the Pacific Northwest of Costa Rica. That’s because he and his wife, Wendy, were working aboard a Windstar cruise ship that made frequent ports of call in Costa Rica.

Today, the 60-year-old owner of Langosta Sports Bar Club spends his days surfing in the Langosta waves, golfing at nearby Hacienda Pinilla, or paying dodge ball in a small soccer field.  You’d be surprised upon meeting the active senior to learn he once worked in banking, but left the corporate life for the high seas before founding his “neighborhood bar.”

“I was drawn to this area because of the surfing,” Mike says. “I always heard so many stories of the great waves, nice people, and beautiful country.

After a false start in banking, Mike became a dive instructor at the VI Dive School in St. Thomas. This was here he met Wendy, a preppy from Boston. Mike thought they had nothing in common and took to calling her “Sorority Smack,” but they ended up married. When Windstar Cruises came to St. Thomas looking for couples to become scuba instructors on one of their ships, Mike and Wendy jumped at the chance. They spent five years in those positions before becoming cruise directors.

The ship they worked on made several stops in Costa Rica including Caldera, Corcovado National Park, and Quepos. And in October 2000, when they visited Tamarindo, their love of Costa Rica was sealed.

As a surfer for over 40 years, Costa Rica had been one of the top destinations on Mike’s travel list. He was well aware of the country’s reputation as a surf spot due to the fact he grew up in Huntington, California, where Robert August—the star of the quintessential surf film Endless Summer—lived part-time when not in Costa Rica himself. “The whole Huntington Beach scene was on to Costa Rica early on, so it was natural to want to come here and surf. I surfed all over that first time: Langosta, Avellanas, and Grande.”

On that first visit in 2000, Mike and Wendy bought a condo in Tamarindo. Two years later they bought a lot in Langosta.

“We weren’t sure what we wanted to do, maybe a water sport business, but we came up with the idea of a sports bar,” says Mike. “We spent enough time in bars, why not own one? The idea was to have a place to play games, and talk to people. We opened in September 2006. This was our dream. It’s a neighborhood bar where everybody knows everybody, like Cheers. Right now, there’s a new generation of kids hanging out playing ping pong, darts, pool, foosball, horse shoes, and sling ball. And we’re only open Sunday, Monday, Thursday, and Friday. It really is a labor of love.”

Mike and Wendy now live in a three-bedroom, two-bathroom apartment just over the Langosta Surf Club. “The bar is my man cave,” Mike laughs.

The town of Langosta is a real contrast to nearby Tamarindo. While the latter boasts 30-plus restaurants, loads of shops, a huge grocery store, medical facilities and pharmacies, clubs, bars, and tons of tourist businesses, Langosta is primarily residential with a smattering of nice places to eat, tour agencies, surf shops, a small grocery, and even an art gallery.

“Living in Langosta is the best,” says Clifford. “It’s nice and quiet yet close enough to everything else, plus we have our own surf spot that usually isn’t very crowded.”

Obtaining Your Visa or Residence in Costa Rica