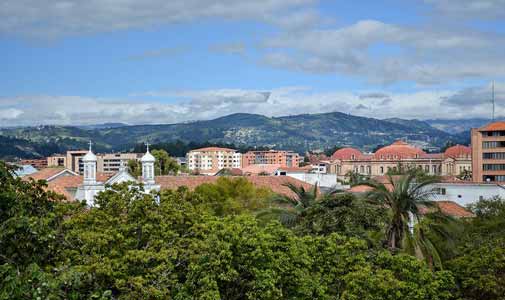 Every so often I lunch with friends and we talk about the weird things we’ve done in Ecuador that you just can’t do back home. We’ve eaten cuy (Guinea pig) roasted on spits, ridden horses during the full moon in the Cajas Mountains and been spit on by Shamans.

Although Cuenca is a cosmopolitan city with all the modern conveniences of home, it still maintains its cultural traditions. So, it’s no wonder we find weird and fun things to do here.

Climb to the very top of the New Cathedral 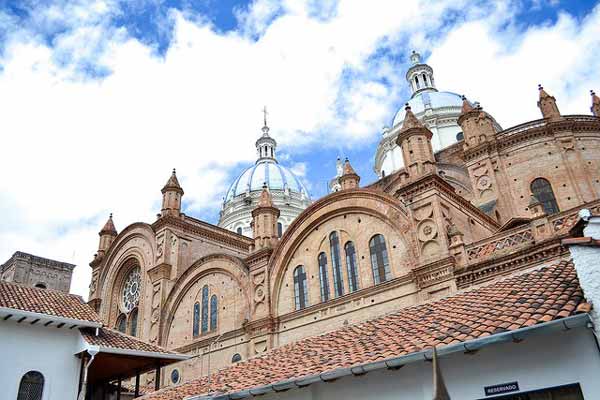 Most tourists are enthralled by the three baby blue domes of the New Cathedral and its massive gold embossed sanctuary. At any time, chanting can be heard and if you are lucky enough to get there by noon, you can enjoy the service along with several hundred Ecuadorians. For those who go on the $4 tour, you can visit the crypt where numerous local religious dignitaries are buried, and a climb up the 150 steps of a spiral staircase tower where you will be at eyeball level with the domes and have a spectacular view of the city. 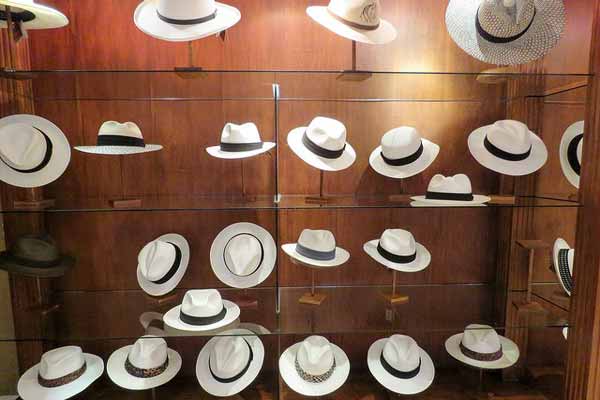 The misnamed Panama hats are actually an Ecuadorian invention and major export. The cost can range from $55 up in downtown El Centro. But if your budget is tight, take the $3 bus from Terminal Terrestre to Sigsig to the Asociación de Toquilleras de María Auxiliadora (ATMA), which is a women’s Fair-Trade cooperative that produces artisan crafts, in particular, Panama hats.

Thanks to the learning curb of making hats, there are plenty of “seconds” so you can snag a genuine Panama Hat at the co-op for $14 and up that look as good as the ones for sale downtown.

Trout Fishing and a Smokey Yurt

A day of trout fishing in the Cajas will reap what you have sowed—a large trout which you take to the cook at Rancho Prado. The trout is lightly breaded and dropped in a large wok of lard where they fry up the crunchiest trout in the Cajas. Your trout is served in the restaurant, a small round stone and adobe yurt with a large fireplace under a grass roof and ceiling blackened by the smoke.

On New Year’s Eve, thousands of Ecuadorians buy up large doll-like paper stuffed effigies and don them with papier-mâché masks representing the things they want to torch (politicians, bad bosses, ex-wives) and at midnight throw them in a pile and torch them sending the bad mojo from the past year up in smoke. 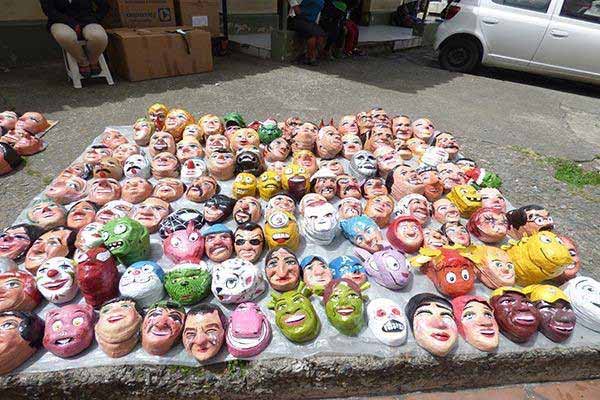 The brave (or drunk) locals jump over the fire three times to gain good luck for the next year. Anyone can participate–just buy up your effigy, choose your mask, walk out your front door and join the revelry.

Ecuador is home to some of the best chocolate in the world, and the world’s most expensive chocolate bar, which retails at $400 for a standard sized bar. To see how chocolate is made, Amedeo Chocolate—Cuenca’s only Artisanal chocolate maker using world class award winning organic heirloom cacao, periodically arranges tours of their chocolate factory, which includes a Willy Wonka view of vats of chocolate and a sampling of their wares for $27 per person.

In the barrio (neighbourhood) of Banos, a 30-minute bus ride from downtown Cuenca, lies the Novaqua Spa, where for $50 and up you can enjoy an hour massage in a peaceful private cave with candles smelling of eucalyptus and lavender. The thermal waters from Baños de Cuenca are well known around the world because of its therapeutics properties. The spa also has a hot beverage station, thermal pool, natural steam bath, sauna, steam box, volcanic mud cave and a nice restaurant serving food and drinks.

If you yearn for less expensive massages, there’s a myriad of offerings you can spot just walking down El Centro’s cobblestone streets—which will run you about $27 an hour.

Hiking from Tres Cruses to the Cajas restaurant

Tres Cruses (three crosses) stands at approximately 4,270 metres elevation on the Continental Divide, where indigenous people transported everything from cars to grand pianos across the Cajas Mountains. Many people have died crossing the divide, so the tradition is to place a stone on the crossing to honour the dead and to give safe passage to anyone hiking this stretch. You can get tours to take you on the three-hour downhill hike from the Crosses to get to one of the best viewing points of the Andes Mountain at the Toreadora Ranger station at 3,959 metres.

You can prop your feet up by the fireplace and drink coffee or chug a beer and eat fresh trout straight from the river while gazing out at miles of mountains.

Pork on a Stick

Everywhere you walk in Cuenca you will eventually run into a whole hog roasting on a stick. If you want a real Ecuadorian experience, pop into the Mercado 9 de Octubre, go past the sides of beef hanging from hooks on the first floor and the fresh fruits and vegetables on the second floor, to the third-floor cafe sporting picnic table seating. A plate of roasted pork, rice and corn will set you back $4 including a freshly blended fruit smoothie made from the fruit of your choice. 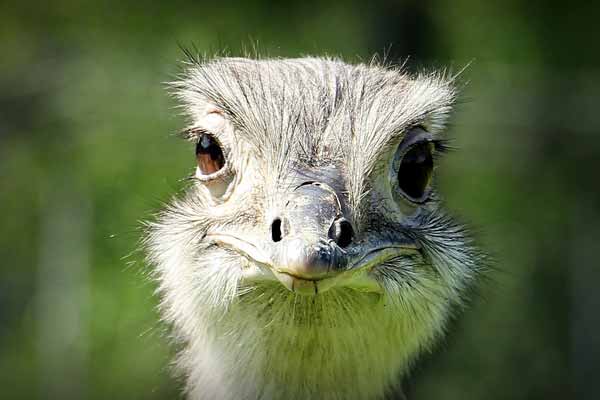 Take a trip to the Yurak Allpa Rescue Centre in Tarqui when you have back pain to get yourself an ostrich massage. Just lay down on the wooden outdoor massage table and the proprietor will throw corn kernels on your back and the ostriches will give you an ever-so-light pecking on your back to eat their favourite snack.

The Animal Rescue has rescued, parrots, birds, falcons, monkeys, rams, deer and even a water buffalo among its menagerie of wild animals. They also have big prey birds that will land on extended arms for the brave. 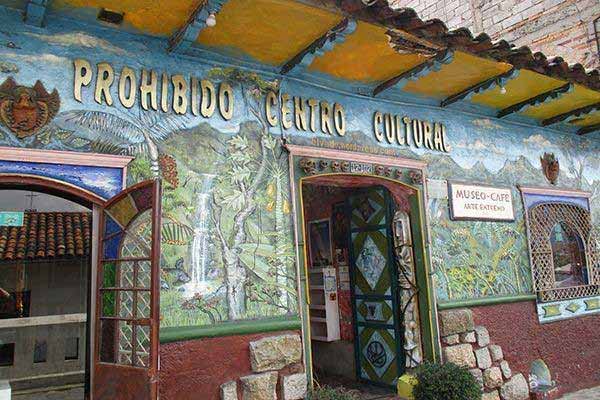 There are some things a nun shouldn’t see. Ecuadorians rarely go to the Prohibido Centro Cultural because of their religious beliefs and you won’t see it advertised in the “top places to go” because the artwork on display includes sexual-infused paintings, Armadillo-headed aliens and even a coffin to lay down in in case you’re tired.

You can also take art classes including screen printing and make your own gothic artwork.

Spit on by a Shaman

You haven’t lived until you’ve had a cleansing by a Shaman, which you can arrange for a private cleansing for around $27 or at Rotary Market on Fridays for $3. Typically, the professional Shamans treatment involves swishing herbs all over your face, back and stomach, rubbing an egg over your body to absorb impurities, blowing fire against your belly to singe out evil and a forceful round of spitting on your face and stomach with a concoction that smells like alcohol, which you’ll probably need after the cleansing.

Explore the Valleys of Ecuador

My Dream Lifestyle in Cotacachi, Ecuador for $1,600 a Month

Finding Freedom and a Carefree Lifestyle in Low-Cost Cuenca, Ecuador