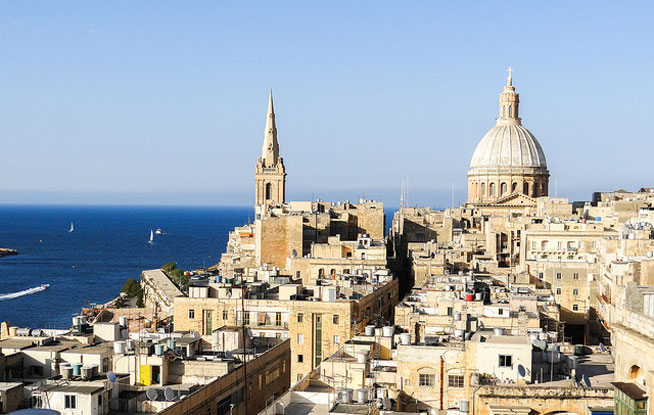 The tiny five-island archipelago of Malta is an increasingly sought-after retirement destination among expats these days—and it’s no surprise why. Situated just 160 kilometres south of Sicily, the Mediterranean island offers an incredible charm, from its crystal-clear aquamarine waters to its stunning historic cities. But its aesthetic appeal is just the start.

Here are five reasons why Malta is a great place to retire.

Like sun? Because Malta’s got it. Boasting an average of 3,000 hours of sunshine per year, Malta is one of the sunniest countries in Europe—and by some counts, the world. So pleasant is Malta’s climate that tourists flock to the island year round, knowing that they can comfortably enjoy most outdoor activities at almost any time.

Maltese springs and summers are bright and warm. From late May through to late October, expect daytime temperatures to range from 21 C to 26 C, with highs around 32 C in July and August. Come December it’s time to break out a jacket, as daytime temps drop to the mid-teens C, where they remain for most of the winter (with some dips below 10 C).

You’d think that life on a lovely Mediterranean island would cost a fortune, but it’s not the case in Malta. Sure, it’s home to plenty of wealthy, yachting types, and if you want to live a luxurious lifestyle, Malta can certainly provide one. But despite this, the cost of living isn’t high here: Some expats live there for as little as $3,400 per month, or even less. Rent for a one-bedroom apartment—even those just a short walk to the seaside—averages around $980 to $1,050 per month. Groceries are inexpensive, with basic items such as bread costing around 50 cents. Dinner out for two at a nice mid-range restaurant, including a glass of wine, can cost about $65.

Thanks to Malta’s excellent—and inexpensive—transportation system, it’s easy to get around the tiny island without a car, particularly if you live on the coast. One expat I spoke to was delighted by the amount they saved by not needing to pay for petrol, insurance or other car fees.

Many people mentally cross the idea a European retirement off their list because they worry about needing to learn another language. In Malta, you don’t have to worry about this. English is one of the country’s two official languages, the other being Maltese. All signs and official documents are in English and most of the people speak English well. Naturally, being in a largely English-speaking environment makes adjusting to life in a new country much easier.

The international community here is huge; an interesting mix of retirees, families, business people and singles attracted by Malta’s affordability and laidback lifestyle.

You can start meeting people through several organised expat groups, including InterNations, 246 Expat Malta and Malta Social. Many of these groups hold weekly coffee morning meet-ups, have parties at local bars and restaurants and organise other fun events.

Malta is the smallest country in the European Union, but that doesn’t mean it’s short on fun things to do. In the warm weather months, there’s plenty of opportunity to swim, snorkel, sail, kayak and otherwise frolic in the amazing blue waters of the Mediterranean. Walking trails abound, there are several rock-climbing clubs and horse riding is also very popular. Golf lovers will also appreciate the 18-hole course less than five kilometres south of the island’s capital, Valletta.

History lovers will find their bliss on the island—Malta has a greater density of historic sites than any other country in the world. You can spend hours exploring the Megalithic stone temples on the island of Gozo (the 2nd largest island in the chain), getting to know every medieval brick in gorgeous 16th century Valletta or Mdina, or peeking inside the island’s hundreds of baroque churches.

Best of all, if you live on the island you get to enjoy amazing local festivals. Malta hosts dozens of lively, colourful festivals each year, from religious celebrations to Jazz festivals to extraordinary annual firework displays, many of which have been in existence for generations. Individual villages also host their own festivals, focusing on their particular specialty, be it strawberries or wine.

So, I think there’s little worry about getting bored here—the greater worry might be having too much to do!