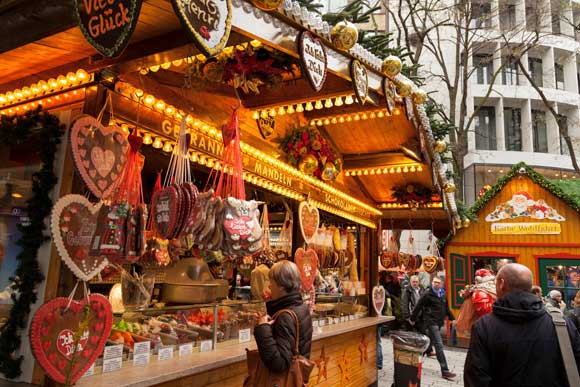 Winter is a special time of the year in Europe. Thousands of cities are showcasing the best of their artisanal wares and traditional food amongst beautiful dressed streets. I’ll never forget my first Christmas market. I had only been in the UK for six months and coming into my first northern hemisphere winter. I had booked a holiday to Budapest unaware of even of the existence of Christmas markets. When I stumbled upon the beautifully lit, cabin-filled town square I was in awe. I had my first mulled wine and grabbed a langos (a deep-fried flatbread) and never looked back…or stopped eating. I’ve visited many more in the time since and below are six of the best…

The city of Ghent, in the Flemish region of Belgium is home to Gentse Winterfeesten. This charming Christmas market reminded us of an spell-binding Christmas fairytale. The streets are lit up with over 130 stalls spreading from Sint-Baafsplein to Korenmarkt. The smell of mulled wine and locally produced bratwurst had my mouth watering from the moment I arrived.

Wooden cabins are bursting with authentic Belgian crafts, from felt reindeers to liquors such as warming Chouffe Cream. Be sure to stop by one of the many food stalls and try the traditional Ganda ham, served with mastel, a bagel shaped bread spiced with cinnamon.

Set on Place de la Réunion, Mulhouse Christmas Market revolves around fabric. Every year, Mulhouse (the cradle of the textile industry in Alsace) produces a special textile for Christmas and the whole town is dressed with thousands of metres of it.

The Etofféeries (as Mulhouse market is known) has around 100 stands and everything you see is locally made. The extraordinary, vibrant fabric is used for everything from napkins to tablecloths, aprons, even decorations for the Christmas tree…including the 30-meter-tall tree that stands proudly in the centre of the market.

Once you’re done browsing all the cabins, be sure to savour some of the local delicacies. My favourite sweet dish was the Berawecka (a cake made of local dried fruit with nuts and spices) and Zimtsterne (delicious little star-shaped cookies made with powdered almonds, vanilla sugar, lemon juice, kirsch brandy and cinnamon…all topped with meringue!).

With over 200 stalls, Dordrecht Christmas market is the largest in the Netherlands. You could easily and happily pass days wandering this market…it covers two-and-a-half kilometres and spreads through the city centre and down to the harbour, where ships are beautifully decorated with Christmas lights. Following the celebrations, I ended up at two stages where live performances added to the festive atmosphere. There is one stage set in the square at Vismarkt and one at the Stadhuisplein.

During my walk of the market I admired the handmade gifts, from carved nutcrackers to silver jewellery and glass baubles. The walk soon worked up a thirst so I stopped for a glass of bisschopswijn (Dutch mulled wine) and paired it with delicious Bitterballen. Bitterballen are round shaped croquettes, wonderfully crispy stuffed with cheese and beef.

Switzerland’s Mount Pilatus Christkindlimärt is the most unique market I have ever visited. Set at 2,132 metres atop Mount Pilatus, it’s the highest Christmas Market in Europe. The setting is breathtaking with views over the surrounding mountains as well as overlooking Lake Lucerne.

You’ll also find around 50 stands offering locally handcrafted items such as beeswax candles and ceramic figurines of Samichlaus, the Swiss version of Santa and Schmutzli, Samichlaus’ sidekick who is in charge of punishing the children that have been bad through the year.

I was dressed for the cold but a warming cup of Glühwein (mulled wine) was a must. Hearty pastetli (a meat pie served with a creamy sauce) also kept the cold at bay. And who could resist the Apfelküchlein (a deep-fried apple cookie)?

You could only describe Cologne’s Heinzelmännchen market as quirky. According to local legend, house gnomes (the Heinzelmännchen) would do all the work in the town each night, allowing the town’s inhabitants to spend their days relaxing, until a nosy tailor’s wife disturbed them one night. Infuriated, the gnomes are said to have left and never return.

The market, set along Cologne’s winding lanes is divided into different alleys. I particularly enjoyed the sweets alley and the feeding alley, known as futtergasse. I indulged in mettbrütche a freshly-baked bread roll served with pulled pork and later, to satisfy my sweet tooth, I couldn’t resist the beautifully-decorated  lebkuchen, the traditional German gingerbread.

In the craftsman alley you’ll find all manner of artisans creating their wares and the the post office in the middle of the market will be happy to post your letter to Santa!

Living in London, I couldn’t resist a quick trip to Bath for their famous Christmas market. Only an hour-and-a-half on the train, it was an easy country escape. Bath transforms into an impressive winter wonderland with over 200 stalls during December.

The market surrounds the local abbey and the sound of carols led me into the heart of the action. This focus here is on local products, with over 80% of the cabins featuring Bath’s craftsmanship. Walking amongst the stalls, you’ll soon find all the traditional British treats. I tucked into a divine pork pie and a beer from one of the local breweries, Electric Bear Brewing. For a sweet bite to finish, try the Christmas pudding or head for the cabin serving classic Christmas trifle.

Christmas markets can take you to some very special and unique locations. They give you a wonderful feel for the city and let you participate in century long traditions. Whether it’s watching local artists create or tasting traditional food made from recipes that have been passed down from generation to generation. I certainly won’t be stopping my tradition of exploring them anytime soon.