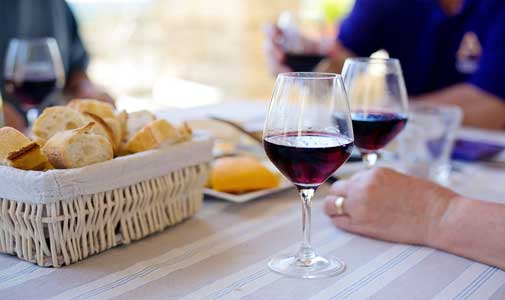 There is one big problem you have to face when retiring to France. Despite your best efforts you will never be able to overcome it…but you will have a smile on your face as you die trying!

The problem: Getting to taste every wine produced in France.

According to Wikipedia, France produces 7 to 8 billion bottles of wine each year. France has close to 3,000 different wines and you will be forgiven for thinking they are all represented when you wander down the aisles (and there are several aisles) of your local supermarket.

When my wife Lorraine and I retired to France more than three years ago I asked on a Facebook forum for advice on which red wines to try.

The best response was: “What a stupid question. Start at one end of the aisle and try them all.”

Three years after taking this sage advice I still have a long way to go but I have also tried some delicious and reasonably priced reds, many of which I revisit!

There are some more expensive bottles around such as Domaine de la Romanée-Conti Grand Cru 1990 from Burgundy for around €20,000 a bottle but don’t expect to find this in your local supermarket. You might be able to snap up a more recent vintage for around €13,000 a bottle. There are more expensive bottles around, but they are for the serious collector.

So, somewhere between a euro and €20,000 you will find a French wine that suits your taste and your budget. One that I regularly buy is a JP Chenet merlot or cabernet-shiraz for €3 ($4.70). It’s a full-bodied wine with a smooth finish. I tried this wine because of the odd shaped bottle, designed in 1984 by artist/entrepreneur Joseph Helfrich. Little did he know that 30-odd years later it would start a small but significant love affair!

Merlot, it is the most common grape variety in France with Australian favourites like shiraz and cabernet-sauvignon coming in a four and six respectively. The ubiquitous chardonnay only makes number seven.

And on the subject of chardonnay, my wife discovered a Margaret River chardonnay at a discount store in France all the way from Western Australia at the outrageous price of €1.50 ($2.40) a bottle!

You will want to try the terrific sparkling wines on offer in France but don’t get hung up on champagne. There are plenty of other drops which aren’t allowed to use the regional name, most of which are excellent.

We live near Limoux in the Languedoc Roussillon region which is recognised as producing the real first sparkling wine in France. Called blanquette it was first produced in the 1530s by monks at the Abbaye de St-Hilaire a few kilometres out of Limoux. The Abbey is still a popular tourist destination.

There’s a legend that the famed monk and winemaker Dom Perignon was staying at the Abbey and copied the recipe for the champagne which now bears his name. A great story but probably that’s just what it is, a story.

He lived a century after blanquette was first produced and it is generally accepted he didn’t make sparkling wines in Champagne which were developed more than a century after his death. The first vintage of Dom Perignon Champagne itself was not produced until 1921 and only released for sale in 1936. You can probably still pick up a bottle, but expect to pay more than €10,000.

For us Australians, one of the most confusing things about French wine is that many do not have the grape variety on the bottle. This is because the French wine regions were restricted on the grape varieties they could use, but even if you are up to speed with this information you still won’t know how much of each grape is used. This is gradually changing but don’t let it put you off. Keep tasting and keep a note of the wines you like.

The French are not wine snobs. While they know what they like, they’ll drink any wine, with or without food. Calling into a tiny village cafe for your morning espresso don’t be surprised to see older locals sipping on their rosé. A great start to the day, so why not join them.

Here’s Why You Should Retire in France

Where Should I Live in France?