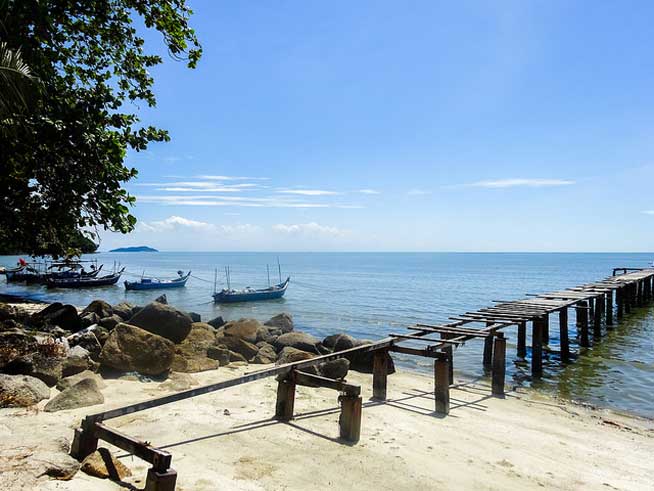 Going to the beach is a great Australian pastime, and here in Penang it’s no different. With a large expat population and Australians still serving at Butterworth Air Base just across the bridge, Penang’s beaches are a little part of home but in Malaysia.

If you prefer things a little more private, away from the maddening crowd, then I have something to share with you. There are still secluded stretches of sand on the south side of the island just waiting to be discovered. Just a leisurely 35-minute drive from George Town are deserted beaches and secret coves shrouded by jungle and undisturbed white sand. Throw in some coconut trees, lots of them, and you have my favourite part of Penang.

There are deserted beaches to the north of the island too—just three kilometres north of Batu Ferringhi near the Malay village of Teluk Bahang is one of the longest. But when you travel to the south of the island it’s like entering another space in another time. A period when everything was less complicated. Time seemingly slows down and suddenly your phone isn’t the most important item in your bag, sunscreen and a good book take precedence.

One of the reasons why the southern beaches of the island are so important is because the area is undeveloped. On an island this small this is a true gem in the rough. It’s largely Malay, and there are traditional kampongs (villages) scattered everywhere. The people are friendly and the food at the roadside stalls delicious.

It doesn’t take long to get to the south side of the island either as a complete circuit of the island takes only two hours. Weekdays are the best time to go and it’s rare that you will see anyone else there.

With a plethora of small islands offshore, glinting in the sunlight, this area is stunningly beautiful. The ultimate day escape. And sometimes, on those days when you have had enough of the traffic in George Town, and the noise that cities generally emanate, I head over there just to read a book and reinforce why I am here. Part of the fun of doing that is picking a cove knowing that you won’t be disturbed.

Interestingly this collection of coves on the south side of the island with their pristine beaches don’t have a name. And maybe that’s the way to keep them a secret. The local Malay’s in the area certainly know about them because at weekends they are crowded with families having barbecues and picnics, and you’ll jostle with locals for a place to frolic in the shallows. But not during the week.

If beach barbecues aren’t your thing there are some great local restaurants dotted along the roads between these beaches. One of my favourites is Restoran Khunthai. Here you can get a delicious chicken curry with rice for two people and two drinks for less than $10.

So where exactly are these beaches and how do you get there? Take the main costal highway to the Penang International Airport and keep on going. A few kilometres past the airport, just past Teluk Kumbar, you’ll see a sign that says Genak Sanggul. Turn left here.

Genak Sanggul is the Chinese fishing village at the end of this road. It’s a pretty, sleepy village and you can’t go further as the road ends at the edge of the village. After that it’s just pristine jungle. There is an old wharf here too and it’s a super place for photographers as the fishing fleet is usually at anchor during the day. This makes for a great backdrop as you focus on the beach looking out to sea. There are a few small shops here too, nothing major though, and if you run low on water it’s a good place to renew.

This stretch of road, from the turn off to the village, is where the secret beaches and coves can be found. There are about six or seven of them to choose from, one as pretty as the next. There’s plenty of shade due to the coconut trees that fringe this side of the island and no currents to worry about whatsoever. All it’s missing is you.