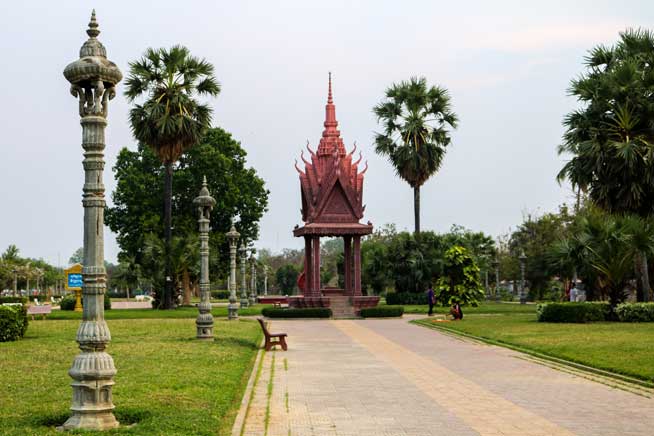 It was the slow pace of life and the small-town feel that impressed me most. Battambang, in north-western Cambodia, is a social and welcoming place. No one’s in a hurry. Sitting down, having a cool drink, and meeting new people is a popular pastime.

Walking around Cambodia’s second-largest city, I felt as if I had stepped back into the early 20th century. While most of Southeast Asia is developing at breakneck speed, Battambang gave me the impression that it was quite content to have settled into an earlier, simpler time.

Battambang does not feel any different than it did when I first visited almost 10 years ago. There are some new businesses, some fresh paint and a number of the old French buildings have been carefully restored, but there has been very little new construction. It seems like some of the same vendors, or maybe their grown children, are still selling from the same street corners. The nearby Angkor-era ruins are still nearly deserted and whatever restoration work that has been planned for them is being done on “Cambodian time”—slow and unhurried, just like Battambang.

I was able to walk from one end of the town centre to the other in about 30 minutes, following the paved walkways that line both sides of the Sangker River, which runs through the middle of town. Well-maintained parks along the river banks are a draw for the locals who come to play with their children at the playgrounds, meet their friends and sweethearts, and work out on the exercise equipment. On either side, Buddhist wats (temples) provide a tranquil refuge for inspiration, rest and reflection.

Quiet streets are framed by French-colonial shophouses, with businesses located on the ground level and living quarters, often with large overhanging porches, wrapped around the second level.

There are several huge neoclassical Beaux-Arts mansions, with imposing and ornate entrances, dramatic columns and extravagant balconies scattered around town–leftovers from the days when Cambodia was a French colony. Most buildings in the downtown area are at least 100 years old.

Battambang is experiencing a cultural revival, with several galleries showcasing work from Cambodia’s best artists. Galleries will often double as coffee shops, and businesses throughout town display art, murals and fine local handicrafts. Jan Ogilvie, who has lived here for more than three years, sums it up well. “If you want something arty, this is a great place.”

There are about 100 or so full-time expats that call Battambang home. Kate Shuttleworth has been living in Battambang for seven years. She says that it has been very easy to meet people. “There are book clubs, movie nights, trivia quizzes, barbecues, yoga classes–all open to anyone and advertised on a Google group called Battambang Connect.”

There is scarcely a business in town that stays open past 9 p.m. This suits some expats just fine. Long-time traveller, Pat Music, a 68-year-old single retiree who has lived in Battambang for the last four years, says “I don’t need the nightlife and the parties, so it works out perfectly for me.”

Tourism is pretty low-key although you will find hotels, guesthouses, and a few B&B options for visitors. I checked out Bric-à-Brac, a B&B and artisanal boutique located right in the centre of town. At $125 per night, it is one of the more expensive accommodations in Battambang, but after walking through the place with the owners, Morrison Polkinghorne, from Alice Springs, and his partner, Robert Carmack, I could understand why someone would want to stay here. Robert says “Battambang is a very creative city.”

Everything in this B&B has been lovingly restored, from the original tiled floors to the paint, the shuttered windows, handmade tassels and bathroom fixtures and even the 19th-century cups and saucers—filled with gourmet coffee—that are brought to your room in the morning.

The many ancient temples in the countryside surrounding the city are similar to the world-renowned Angkor-era temples in Siem Reap, yet they receive very few visitors. Wat Banan’s five towers, which have not yet been restored, sit on top of a hill about 18 kilometres from town. Wat Ek Phnom, just 11 kilometres from Battambang, is the most visited ruin in the region, though during the weekdays, you’ll probably have the temples all to yourself. Its huge Buddha statue sits within the partially collapsed ruins of an 11th-century temple. Both temple complexes are easily reached by motorbike or taxi.

Two of the nicest restaurants in town, Au Cabaret Vert and the Bambu Hotel Restaurant, offer fine Cambodian and European cuisine. A meal for two at either restaurant, with an appetiser and drinks, won’t cost more than about $50. Most other restaurants in town are much less expensive, and dinner for two, including drinks, will cost $25 or less. Of course, if you eat where the local people eat, you can find cheap and healthy food for just a $1 or $2. Beer at a restaurant can be had for about 65 cents, and mixed drinks are about $5.

Most people do their food shopping at the huge Central Market. It’s a traditional Asian market, so they go in the morning, when food is at its freshest. Items at the market are priced in Cambodian riels (unlike most other purchases, which are generally made in U.S. dollars), and bargaining isn’t required. Melbourne expat, Tamara Salajic, who has lived in Battambang since 2014, explains, “Prices do tend to go down a little bit once they get to know you.”

The cost of living in Battambang is low. Renting a house is particularly inexpensive. Houses with modern, western-style conveniences range from around $265 to $530 per month, and small two-room furnished apartments with a swimming pool, housekeeping and most utilities included will cost less than $370 per month.

Pat lives comfortably on her small pension and teaches English for a few hours every week. “My monthly bills come to about $330 to $400, and that’s including rent, water, electricity and internet. I buy my food at the market and I usually cook at home. Going out to lunch is my biggest expense, though that usually comes out to just around $6.50 or so. I walk everywhere. My average monthly budget is less than $660.”

Fortunately, there are not many occasions in Battambang where knowing how to speak Khmer is really required. Few foreigners have mastered the language, though expats agree that knowing how to speak a few words, and learning numbers, is helpful. Jan is committed to improving her Khmer. She has hired a private tutor to teach her the language. She pays $46 per month for two one-hour lessons per week.

Although there is a medical clinic in Battambang with an English-speaking doctor, Kate says “It is mainly for accidents rather than long-term medical or surgical conditions.” Jan adds “The new Bangkok Hospital in Phnom Penh is pretty fancy, but if you can afford it, go to Bangkok. It takes the same amount of driving time—about six hours—and you know that you’re getting high-quality medical care there.”

Battambang is small enough that owning your own wheels is optional. Pat, who prefers to walk whenever possible, says “If I do choose to have public transport, I can take either a motorbike taxi for 65 cents or a tuk tuk for $1.30.” Tuk-tuks are everywhere and rarely charge more than $1.30 per person for any destination within one or two kilometres from the centre of town. Many expats find that having a bicycle eliminates the need for even that expense.

Even though Battambang has a population of about 250,000, the closest commercial airport is a three-hour drive away in Siem Reap. The main transportation hubs are in Phnom Penh and Bangkok. Taxis, 16-seat vans and long-distance buses serve these destinations on a daily basis.

Battambang is also a good place for seniors. Pat explains, “Everyone calls me grandma or grandmother, even the monks. I feel very spoiled and pampered. People hug me, tuk-tuk drivers sometimes give me free rides. They treat me like gold.”

The Most Accessible Visa Available in Asia

Westerners looking to relocate to Southeast Asia are quickly noticing that Cambodia has one of the most accessible visa policies in the region and now attracts over 6 million international arrivals each year.

All you need to do to obtain a visa on arrival is hold a passport with six months’ validity and blank pages, fill in a short immigration form and provide one passport-sized photo. If you don’t have a photo, then you can just pay a fee of US $2 to waive this requirement.

If you plan on staying for less than 30 days, you only have to pay US $30 for a tourist visa (T) upon arrival at Phnom Penh and Siem Reap international airports.

To avoid the hassle of queuing at Immigration, you can get an e-Visa issued in advance via the official website, which charges a small processing fee of US $7.

However, if you want to stay longer term in Cambodia then all you need to do is pay an extra US $5 for a 30 day “business” or “ordinary” visa (E) which can be extended for up to 12 months at a time and then renewed on an annual basis.

Make sure to visit one of the many hundreds of travel agencies around the country before your 30-day visa expires—they offer very fast processing of visa extensions for competitive fees.

It is very important that you extend your visa on time as Immigration will charge US $5 for each day you overstay your visa for up to 30 days, then increasing before rising to US $6 per day after that.

If you do overstay your visa, try to resolve the situation as quickly as possible because after six months you can face detention and even deportation.

As long as you behave yourself and extend your visa on time, Cambodia is one of the best destinations in Asia for tourists and expats looking for straightforward and hassle-free immigration without the bureaucracy and headaches in some other countries.