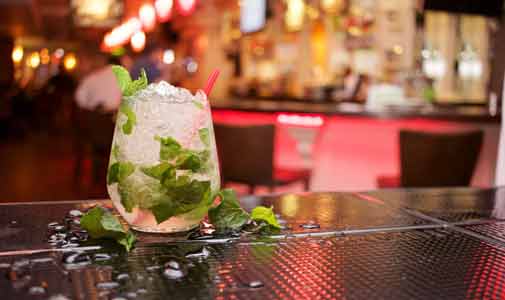 Without a doubt the hardest thing to ask an expat in Phnom Penh is to make a short list of the best restaurants and bars in the capital city. There are literally thousands of them. They’re everywhere and cater to every niche, nationality and taste.

Every expat has a different opinion, yet it’d be hard for anyone to come up with a list of less than 20 of the best establishments. The competition is really that good and the prices are unbelievably affordable.

Instead of a definitive list I’d rather provide more of a taste test to whet your appetite and share some highlights about some of the top places to visit for food and drink in Phnom Penh. Just remember these are only the tip of the iceberg!

Originally a hangout for foreign journalists during the 1990’s, The Foreign Correspondents Club (FCC) evolved into the standout watering hole with great views of the riverside area where it is located. Over time it has become a “must do” for anyone visiting Phnom Penh making it more of a tourist destination than anything related to news reporters. When expats have visitors from overseas who want to see the riverside then the FCC is always top of the list due to its restored colonial aesthetics and brilliant views of the street life below.

If the FCC proves too touristy then many an expat will suggest going to Le Moon Rooftop Bar which is a large, open-air terrace just a block down the road. Accessible only by taking an elevator then a fleet of stairs the views are even better than the FCC due to the higher vantage point. 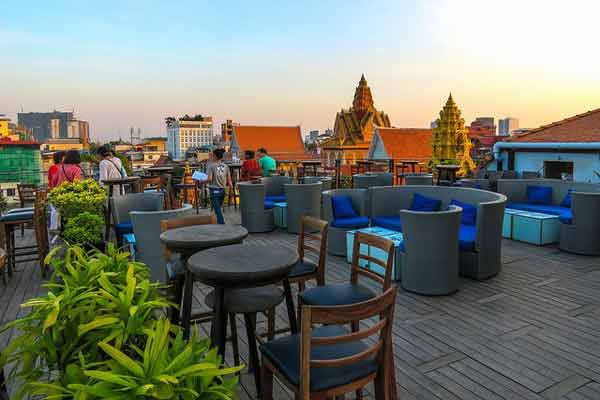 The bar also provides a wide range of ice cold beers and a decent cocktail list.

While Raffles is best known for their famous hotel in Singapore, the Le Royal in Phnom Penh more than holds its own in terms of history and class. It has attracted luminaries such as Charlie Chaplin and Jaqueline Kennedy, for whom the champagne based “Femme Fatale” cocktail was specially created for by the hotel. But the main draw for expats in Phnom Penh is the Elephant Bar’s happy hour which lasts from 4.30 p.m. until 9 p.m. every day. Their unbeatable range of top shelf (and very generous) cocktails are offered at half price during this time which is a significant discount compared to the usual cost of $20. There’s probably no better way to end the day and begin the evening by enjoying a cocktail at the most historic 5-star hotel in the capital.

Offering “a true taste of Cambodia” Romdeng is a training restaurant which serves extremely authentic Khmer cuisine. It operates in and around a gorgeous colonial building surrounded by a garden filled with lush trees and plants. The menu could not be any more representative of traditional Cambodian food with everything from fried tarantula and crickets (for the adventurous) to the more foreign friendly Fish Amok or Khmer Muslim Beef Cheek Curry. There is also an excellent selection of vegetarian dishes available.

Prices range from $5 to $10 depending on the dish you order.

Perhaps the best place in town to experience a local style Khmer barbecue with their delicious beef and seafood cooked to order from the grill. Located just a few streets down from Independence Monument it has remained perennially popular with Cambodians and expats alike. So much so that it can be difficult to get a table in the evening which has led the owners to opening Sovanna 2 just a stone’s throw from the original location, both of which attract crowds every night. Costs from $12 per head including a fresh draught beer.

The epitome of fine French dining in Phnom Penh, Topaz continues to be a landmark restaurant that has been in operation for over 20 years. Its enduring success has been the consistent quality of their menu and the ingredients that go into every dish. Despite being one of the most elite establishments in Phnom Penh the prices range from $10 upwards per dish (but if you fancy spending $100+ on very good caviar, this is the place to do it).