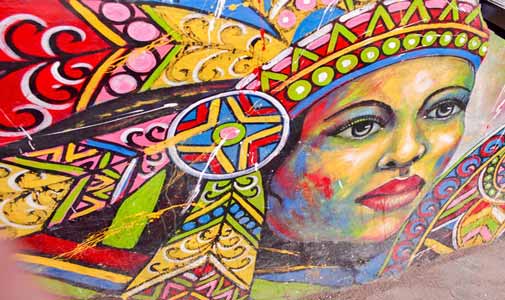 The island of Bali has enticed many expats to retirement overseas. And, for quite some time, the towns of Sanur, Legian and Seminyak have been popular choices. But just up the coastline is Canggu and it’s quickly growing in popularity.

Canggu, pronounced “changoo”, is a village located only 15 kilometres north of the more well-known party resort, Kuta. The western coastal stretch spans about eight kilometres, running from Berawa beach to the village of Cemagi. It was once a hidden corner of the island, only known by a select few, but it’s now become one of Bali’s up-and-coming hotspot.

Hinduism is the main religion across Bali and it’s no different here. There are many temples and shrines throughout the town, with the most famous of all found in the village of Cemagi.

The coast strip is dotted with many lava stone temples, some of them centuries old and important to the Balinese culture. The Tanah Lot temple is honoured by the Balinese and holds special significance in Balinese history. Literally meaning “Temple of the Sea”, the revered temple sits on a large offshore rock formation and at high tide is surrounded by the ocean.

The temple dates back to the 16th century and the main deity is Dewa Baruna, a sea god. The temple is one of seven sea temples around Bali, which are important in Balinese mythology.

Driving into the region of Canggu evokes a country feel. The traffic thins, the crazed pace of the southern tourist areas is left behind and there’s a definite change to the urban sprawl. Fields of rice, banana plantations and old-style warungs (small local eateries) line the roadsides. Local homes are dotted among the new villas and boutique hotels which are popping up. Despite the changing scenery, Canggu retains a surfing town feel, reminiscent of the northern Sydney beaches back in the day.

While Canggu is known as the new hotspot in Bali, the population hovers around 40,000. Old-time Bali still exists and appears to be prospering, with locals, tourists and expats, a mix of old and new all merging well.

During ceremony times, the temples are visited by the locals dressed in their traditional clothing. Tall bamboo poles decorated with colour line the streets, and traffic comes to a standstill as blessings happen on the roads outside the locals’ homes.

Away from the beaches though, you’ll find it is still very much a rural area. You’ll come across large blocks of land, covered with lush, green rice paddies, filled with colourful scarecrows keeping away the birds. Watch as the Balinese men and women tend to their gardens as white herons wander the muddy flats.

There are three main villages that have thrived over the past few years: Berawa, Batu Balong and Echo Beach. Ten years ago, a series of small villages were spread across these areas. They’ve since become lively pockets of shops, restaurants, cool cafés and bars, spas and some amazing villas. There’s a buzz to the community and its popularity is increasing with both tourists and expats.

There is real diversity to the area, with beach clubs spread out and the beanbag-on-the-beach bars with drinks piled high inside eskies on the sand. There are no beach sellers, other than the occasional ice creams and coconuts, so you can sit back and enjoy the sun without being approached by the hawkers that favour Legian and Kuta beaches. Expat surfers and swimmers enjoy the waters of the Indian Ocean and the locals join in among them.

It may seem like a disjointed town. Buildings and river inlets mean you must drive around to each beach, if you’re travelling by car or bike. Known mainly to the locals, shortcuts do exist, but use them at your own peril. The shortcuts are virtually narrow paved paths, cutting across rice fields, paddocks and villa properties. For a motorbike it’s no issue, but for a car the width is barely wide enough.

On the beach at Pereranan, you’ll find the huge statue of Gajah Mina. An elephant’s head with a fish’s body, it’s one of seven animals highlighted in Hindu mythology. It was built in 2016 by the local community and you’ll also see the same depiction painted or carved into the temples around Bali.

The area is also famous for its large murals, seen on many walls as you make your way around the town. On one building, a 15-metre mural of a thinking woman is a standout. Sitting down, arms resting on her knees, she sits with her chin leaning on her hand, watching the world as it goes by.

Surrounded by sprawling fields of grass and banana trees, it’s one of the most photographed murals. You’ll see many street-art murals around Canggu, most of them commissioned art pieces that wouldn’t be out of place in the streets of Berlin or New York.

Cost of Living in Canggu

As a potential retirement location, Canggu offers a laidback lifestyle, close enough to the bigger town amenities without the hustle and bustle. The international airport is only a one-hour drive away and popular Seminyak only 15 minutes.

A furnished villa, located in a quiet area and close to one of the beaches, can be rented from $1,100 a month. Some even come with rice-paddy views and you’re only minutes away from restaurants and cafés.

Beach clubs, or large spaces calling themselves that, dot the community. There’s Finns Beach Club, Como Beach Club and La Brisa, while Old Man’s has quickly become a favourite of expats. The bar scene doesn’t dominate this area, however, and Sunday is usually the only big day/night out. That’s not to say you won’t be able to socialise…there are plenty of restaurants and bars to enjoy a cold drink and a nice meal and meet with other expats at the same time.

Echo Beach Club is a well-established icon in the Canggu area, and a favourite for expats and visitors alike. The seafood barbecue is a must, with seafood kebabs ($11), barramundi fillet ($9) or marinated pork ribs ($8) on the menu.

Average Costs per Couple for Canggu

A comfortable lifestyle is easy in Canggu, with Balinese traditions still prominent and modern conveniences at your fingertips. Enjoy a morning walk along the black sands or through the quiet streets as the locals come to life… a coffee at one of the many cafés or a long lunch at your favourite restaurant.

Cooking at home is easily done and there are local markets which offer fresh fruit, vegetables and produce. Around $15 will buy a week’s worth of vegetables and tropical fruits like pineapples, mangoes, dragon fruit and mangosteens. At Nelayan Beach markets, a whole fish will set you back around $7 and a chicken, $6.

Supermarket shopping is easily done, with both Popular Deli in Berawa and the Pepito supermarket in Canggu. $50 to $100 will certainly cover your needs on a weekly basis.

For when you don’t want to cook, head out and discover the many places on offer. Healthy living is easy in Canggu. Try Quince for coconut crumpets in cinnamon butter, fresh strawberries, banana and coconut flakes or avocado toast. Or you can get a huge mixed salad at Betelnut Café for $5.50. At Warung Dandelion, the gado-gado, a traditional Indonesian vegetable and satay dish, is only $2.50.

Unlike destinations like Malaysia and Thailand, Bali isn’t known for its healthcare facilities.  Dependant on the visa you choose, healthcare is available to expats choosing to live in Indonesia. For anything serious, most expats choose to travel to Singapore or Australia for treatment. For that reason, medical insurance is advised when living in Bali. Some expats who travel in and out often choose travel insurance to cover their needs. At about $500 for a couple per six months, it’s quite affordable.

Siloam Hospital has a branch located in the centre of Canggu and there are many medical centres available for minor ailments. A round of antibiotics and a consultation with a medical practitioner will only set you back around $16.

Most over-the-counter medications can be purchased at the local pharmacy, known as the Apotek. For something as simple as paracetamol, a box of 100 tablets will cost around $5.

For bigger hospitals, BIMC in Kuta and Siloam in Denpasar are most widely used. A 45-minute drive from Canggu, BIMC was the first hospital in Bali to be accredited by the Australian Council on Healthcare Standards International (ACHSI). Both hospitals have on-call specialists for any specific needs you may have.

There’s a big expat community in Canggu, dominated by Australians. The local AFL team, the Bali Geckos, train and play at Finns Recreation Club. For the past 15 years, Finns has hosted the Bali Masters AFL 9’s. Over three days, over 20 teams from across Australia and Asia battle out the championships. There’re quite a few ladies’ groups who meet regularly too, raising money for different charities while enjoying long lunches and socialising.

Finns Recreation Club is set on four hectares (10 acres) among the sprawling rice fields in Canggu. It features a complete fitness centre, including a lap pool, as well as sports grounds, tennis courts, a business centre, a day spa and many restaurants. Monthly memberships provide benefits such as fitness centre access, tennis centre access, a pool towel, WiFi and 10% off food and beverage ($180 per month).

If you don’t want to go to the fitness centre, Canggu beaches are mainly popular for surfing, with two famous beaches with world-class waves—Echo Beach and Old Man’s Beach. They’re both ideal spots for beginners and the experienced, with board hire and surf lessons available everywhere. Along the stretch, Berawa Beach included, the sunset is a must as the Indian Ocean turns orange with the setting sun.

Relaxation in Canggu is taken to a whole new level. There are many studios offering yoga and Pilates and just as many spas for massages and indulgence. Go to Samadi Bali (a spa and wellness centre) for yoga ($13) and a Balinese massage ($25). The Canggu Studio will keep you fit, with Muay Thai, boxing, yoga, Cuban dancing and salsa dancing just some of the choices.

It’s easy to get around Canggu on a scooter, as the traffic here isn’t as chaotic as in other areas. You can easily lease a scooter for $60 to $80 a month or purchase a used scooter for about $400 to $800. Buying a car is just as expensive as back home, if not more so. But renting a car is easy. A Suzuki Swift is around $300 a month and usually you can negotiate that price for a longer term. Currently, petrol prices are around $0.75 per litre for the standard fuel.

For a quick getaway, head to Medewi. A two-hour drive from Canggu, Medewi is a remote village which offers a glimpse of Bali before mass tourism and Western ideals became established. The beach is part rocky and part white sand and local fisherman offer their daily catch at affordable prices.

Also known for surfing and the sunsets, there are beachside bars to laze away the hours. Stay at the Sea Medewi Resort, situated on the ocean with picturesque sea view rooms ($70 per night).

Canggu is a melting pot of differences all existing as one. Long known for its surf breaks, it was only a matter of time before the area was seen as a liveable town in Bali. With a fantastic location, convenience, value for money and local traditions, Canggu is a great area to consider for a relaxed lifestyle.

Cost of Living in Bali