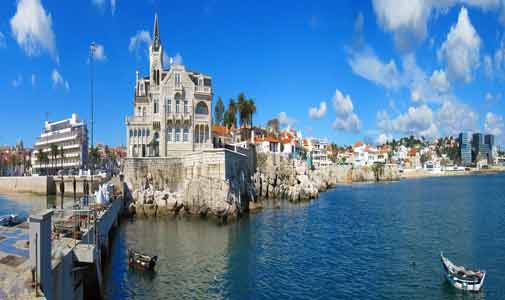 One thing is certain: There’s no better place to begin discovering Portugal than in the cosmopolitan yet laidback village of Cascais, 32 kilometres west of Lisbon on the estuary of the River Tejo—also known by its former Roman name, the Tagus.

One unmistakable landmark to let you know you’ve arrived in Cascais is the Cidadela, a fortress built in the 15th century as defence against Spanish invaders. It took on a different role 400 years later when King Luis I ordered the governor’s palace within its confines to be renovated. He moored his yacht in the bay below, the fortress became the royal family’s summer residence and Cascais was dubbed “the Portuguese Riviera”. (You too can enjoy living like a monarch, because today the Cidadela is a five-star hotel, one of Portugal’s finest hotels—or pousadas.)

But Cascais has not forgotten its origins as a fishing village. Seasoned fishermen still leave from shore in the early morning, returning with their catch of sardines, crabs, mussels, robalo, dorado and octopus. At lunchtime, the men eat on the dock, family-style, from huge stock pots of simmering fish stew, sharing stories washed down with local wines.

It’s not only the arresting beauty of the bay that charms locals and visitors alike. Cascais is known for its manicured parks, shops offering traditional items like pottery and lace and upscale clothing boutiques like Max Mara and Hugo Boss. A multitude of restaurants provide outdoor seating and there is even a museum or two, like the Paula Rego House of Stories, for the art or history buff. 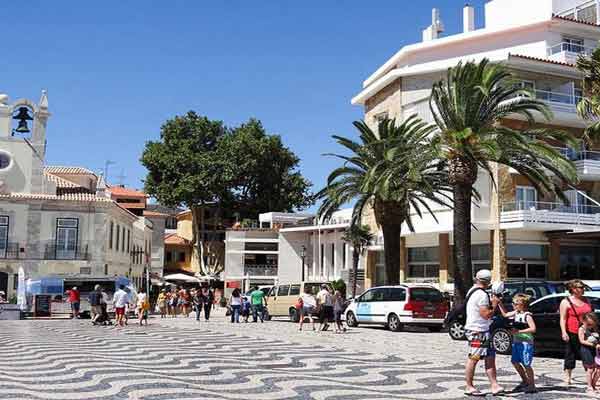 If you’re not a fan of extreme temperatures, Cascais might be the answer for you. The town is blessed with a year-round moderate climate, with temperatures ranging from 13 C to 25 C. Golfing is nearby and favourable sun and wind conditions make sailing, kite surfing and windsurfing—in addition to traditional surfing—popular activities in this region whose economy hinges on tourism.

It’s easy to get around Cascais by car, although parking can be tricky at peak holiday times. But it’s a great walking zone (wear comfortable shoes for the cobbled streets and hills you’ll encounter) and there’s an ever-present taxi queue in the centre of town next to the carousel.

To the north of Cascais is the wild and rugged surfing beach of Guincho, and farther still is Sintra, famous for its pastel-painted Pena Palace, Castle of the Moors and National Forest.

When you want to explore to the east, you can take the autostrada (highway) or the 30-minute train (Linho do Cascais) to the Cais do Sodré station in Lisbon and visit its many museums, parks and districts like Alfama—the oldest neighbourhood in the capital. If you have an urge to travel farther still, there’s a municipal airport nearby in Tires, and Lisbon Portela International Airport is just 45 minutes away. 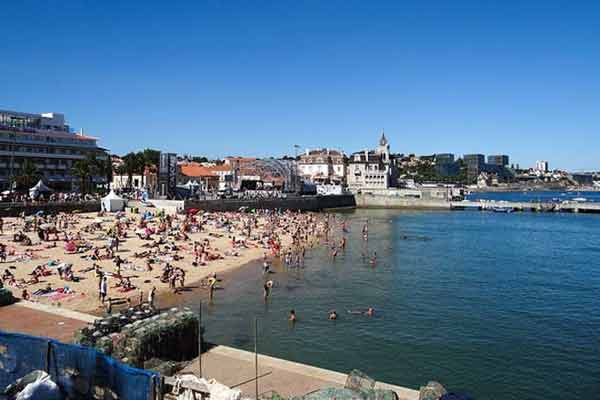 Cascais has myriad inexpensive, free and fascinating things to do and see and it is a hub of diverse cultures. Sitting in a café you are likely to hear not only Portuguese and English, but also Spanish, German, French, Chinese or Italian.

Start your day at Sacolinha, the famous bakery on the main street of Avenida 25 de Abril. Choose a pastry or something more substantial, like a tosta de fiambre e queijo—how can you go wrong with grilled ham and cheese?

Afterwards you might want to work off a few calories. Just a kilometre away is the dramatic seaside cliff formation of Boca do Inferno. When you’re done with your walk on the wild side, head back to the serenity of Portugal’s past, preserved in a beautiful villa off the beaten path in the Museu Condes de Castro Guimarães.

On Wednesday and Saturdays, the market—aptly located on Rua Mercado—offers inexpensive clothing, handicrafts and produce for sale in a festive atmosphere.

Grab a bite to eat and stroll the waterside promenade toward Estoril. Stop in the casino—Europe’s largest—which James Bond graced with his presence while filming Casino Royale.

You’ll find that Cascais is the perfect blend of city hustle and bustle, and the calming influence of brilliant blue waters and pristine beaches. 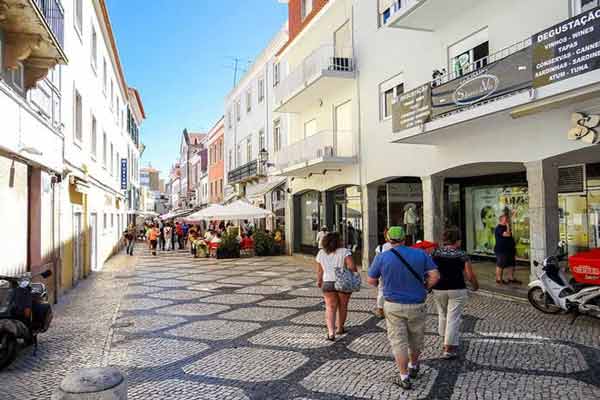 The village of Cascais is one of the wealthiest municipalities in all of Portugal, but that doesn’t mean it’s to be dismissed as too expensive. On the contrary, what it means is that the city is marvellously maintained. Streets are spotless. Red, yellow and purple blooms burst from street lamp baskets and roundabouts are decorated with intricately designed flower arrangements.

Grocery shopping is convenient and inexpensive at the Hypermercado Jumbo.

Here’s what you can expect in the way of expenses, based on a monthly average for two people:

If you opt to live in a house instead of an apartment or condo, you might want to add a gardener to your budget. Generally, you can expect to pay about $30 per visit.

Property taxes are based on real estate value. If you are considering buying a home, we suggest you work with a qualified, English-speaking professional to make sure you understand all costs associated with your purchase.