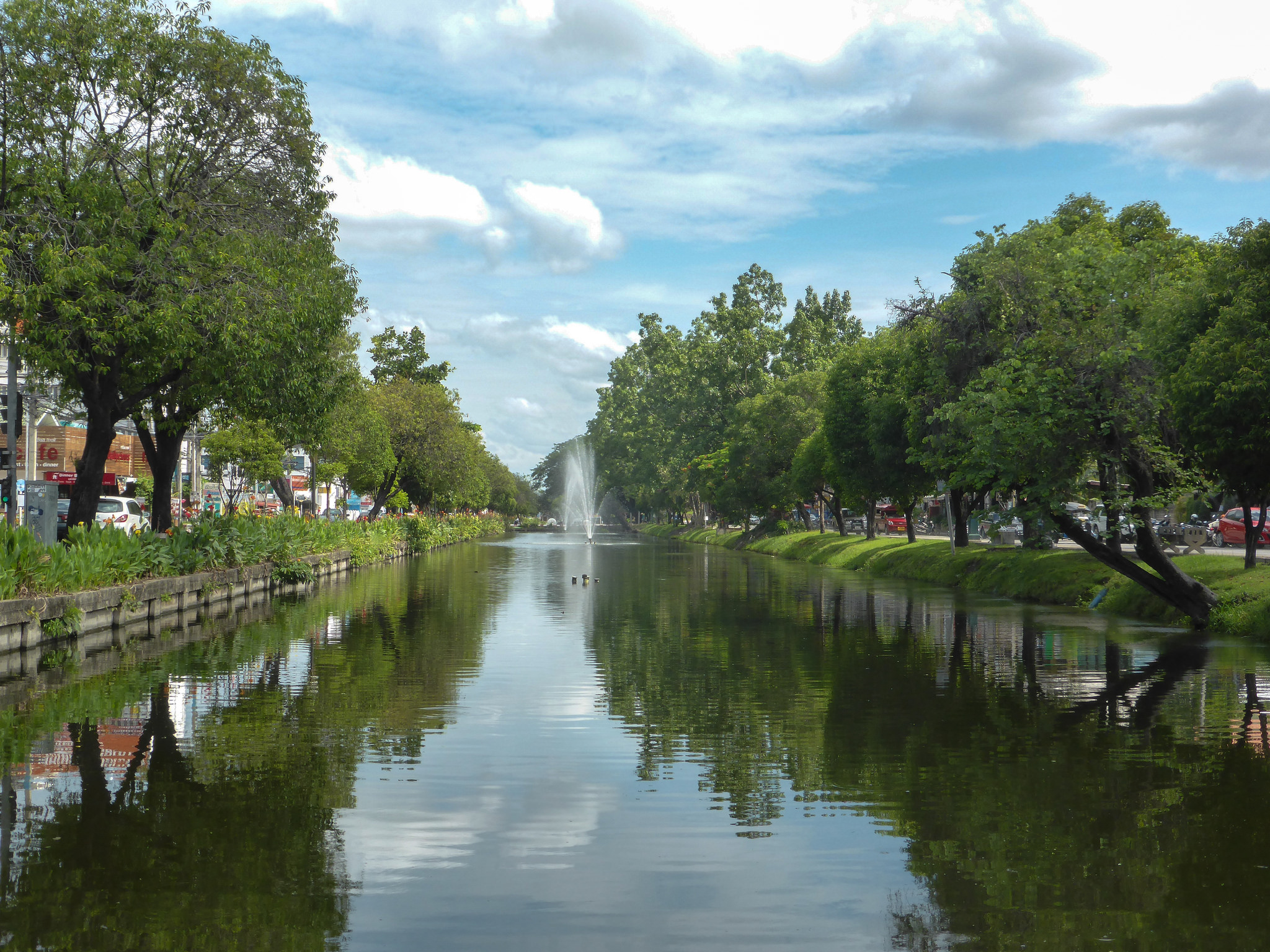 Years ago, I was certain I had found what every man or woman should seek: my own Shangri-La.

On a whim, two of us—young and dashing U.S. Army lieutenants—headed for the hills of northern Thailand, to Chiang Mai. We were snatching a much longed-for leave from the wars and turmoil then storming across Asia. Slumbering in a green valley, Chiang Mai had the rare feel of innocent, faraway mountain places, like that Himalayan hideaway in James Hilton’s novel Lost Horizon.

We strolled down the sleepy, narrow alleys, with their delightful teakwood houses where chickens clucked in backyards, to suddenly stumble upon a splendid Buddhist temple. Hardly a motor was heard; just a lulling swish as a trishaw driver would pedal us back to our hotel on almost-rural Huay Kaew Road, below the darkening silhouette of Chiang Mai’s dominating feature, the 1,680-metre Suthep Mountain. We encountered nothing but natural hospitality. And, of course, being young, we were also very taken with the legendary beauty of northern Thai women.

Fast-forward four-plus decades to 2014… The overgrown village is now a sizeable urban centre (evening rush-hour traffic-jams are common on Huay Kaew). You can’t call it Shangri-La anymore. But by many polls, and my own reckoning, Chiang Mai remains one of the most liveable places in Asia.

So my wife and I bought 3.5 acres of land, including our own rice field, in a lovely valley outside the city. Seven years ago we built our retirement home, “The House at the End of the Rainbow”, as the wooden sign by our gate says.

My British wife lives there full-time, along with two dogs and other gentle creatures. I still ply my trade as a foreign correspondent for the Associated Press, and commute up as often as possible from my base in Bangkok. Both of us have no regrets so far. We love the place. And so do an increasing number of retirees, among the estimated 40,000 foreigners who call Chiang Mai home.

The plusses they cite are generally uniform—a relaxed lifestyle among a friendly local population, a vibrant expatriate community, low crime rate, cool “winters”, varied activities and services, excellent medical care, and a low cost of living. And that special magic I sensed years ago, which still lingers. “This is arguably the cheapest place on earth to live well,” is the way a Huffington Post blog put it, rating Chiang Mai number five in the world’s top 10 retirement havens for 2013. “I live like a king for around $2,000 a month,” trumpets an expat friend.

With an ongoing boom in housing construction for both foreigners and Thais moving up from Bangkok, the city offers a wide price range in rentals and purchases. A few planned retirement communities have also opened their gates. Since most foreigners cannot own land in Thailand, a number of luxury apartments have been developed in recent years, aimed at retirees. The relatively low costs extend to medical services, which are generally top-flight in Thailand—at least at private hospitals and clinics, where medical tourism has grown into a thriving, highly lucrative industry. Chiang Mai has more than half-a-dozen excellent hospitals, including Chiang Mai Ram, Suan Dok, Lanna, and McCormick, founded in 1888 by U.S. Presbyterian missionaries.

In 2009, McCormick opened an assisted-living facility on its spacious, garden-like grounds, the first of its kind in the city.

Despite having been attracted to Chiang Mai since my first encounter, I had misgivings, some shared by others contemplating retirement here. Property ownership was not an issue, since I could own land through my daughter, a Thai citizen from my first marriage. Neither was the language a barrier, since my wife and I speak Thai. And, hoping to be able to drive for many more years, the woeful public transport was not an immediate concern.

However, I had lived in the tropics for more than half my life. I still longed for four seasons, and Chiang Mai has its distinctly unpleasant ones. The winter months, November through February, are truly delightful, but the following few months can be brutally hot. They are also plagued by an almost perpetual haze from the traditional burning of post-harvest rice fields and of forested areas in northern Thailand, as well as in neighbouring Burma and Laos. Thai authorities have been unable to stop the practice.

Perhaps my chief concern was whether Chiang Mai could offer enough stimuli—cultural, social, entertainment and otherwise. After a lifetime in have-it-all cities, never mind roaming the globe covering wars and revolutions, meeting with a glamorous film star one month and a grubby guerrilla leader the next, I’m used to stimulus. The jury is still out on me (my wife wouldn’t be anywhere else), but it’s been a good start, sweetened by what can often prove a nightmarish experience in Thailand: house-building.

Typically, workers don’t show up. Contractors cheat you and insist on ignoring your specifications. And finished homes are delivered over-budget and never on time. But our experience proved just the opposite. Our lovely young female architect accommodated every possible wish, and our contractors, a husband-and-wife team, bargained furiously to get us the best possible deals from suppliers. All three have become friends.

The warm welcome we received in our village, seemingly free of resentment of our relative wealth, likewise served to dampen doubts about our choice. Although I am not as well-known because of my short stays, my wife is greeted by calls of “Sawasdee, Paa Sarah” (“Hello, Auntie Sarah”), as she pedals her bicycle to visit the dynamic young abbot of our local Buddhist monastery, shops in village stores, or eats some of the best noodles anywhere at $1 a bowl.

Just in our own village, where we are trying to fit into the Thai community rather than only stick to other foreigners, my wife can take yoga classes and water-colour painting classes with a prominent retired Thai artist. She is also much involved in local charities.

For more earthly pleasures, downtown Chiang Mai is half-an-hour’s drive away. With two major shopping malls and more on their way, plus several supermarkets, there is hardly a thing we can’t buy there these days. Or eat. Along with Thai cuisine, our choices are almost unlimited when we come into the city for lunch or dinner: French, Italian, Mexican, vegetarian and Chinese (Yunnan province-style). Then there are British pubs and the Writers Club and Wine Bar in the heart of the ancient, walled city, where I can meet old journalist colleagues and young Thai artists. In recent years, Chiang Mai has also become Thailand’s Left Bank, tapping into a 700-year-old artistic heritage to create distinctive design, architecture and painting. A vibrant alternative culture has sprung up that features art galleries, laidback cafés and musical performances, including Western classical music. In the tourist sector, some architects have turned their backs on globalised, cookie-cutter hotels, creating more intimate spaces inspired by bygone styles.

And should we feel the need for a holiday or to visit family and friends in the wider world, Chiang Mai’s international airport is attracting ever more foreign airlines. Plus it’s only a 50-minute flight to Bangkok, one of Asia’s major air hubs. Of course, all these conveniences, comforts and changes have come with trade-offs, the loser being the old Chiang Mai that I first fell in love with. For the newcomer retiree, without benefit or burden of the past, this may not be important. For me, there are regrets. I haven’t found Shangri-La, but I’ve come pretty close.

Get Your Free Thailand Report Here

Sign up here for IL Australia’s e-letter and we’ll send you a free postcard e-letter three times a week. We’ll also send you a FREE research report on Thailand: Live Like Royalty in the Land of Smiles.