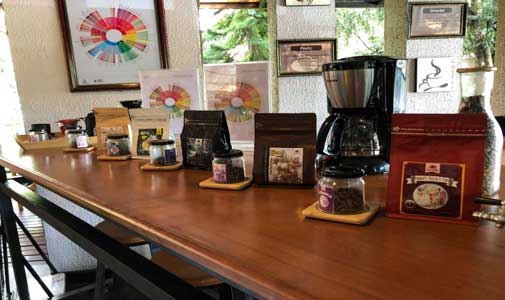 One of the things I miss most about Melbourne is the coffee. The city is famous for its cafe scene; latte drinking is practically a Saturday morning sport.

So when my fiancé and I made the decision to move to Chiang Mai, Thailand, earlier this year, we knew we’d have to lower our expectations when it came to all things caffeinated. Thankfully, Chiang Mai’s eclectic mix of coffee shops means we haven’t had to suffer through too many bad brews.

Alas, we weren’t so lucky in Myanmar, where we recently spent two weeks. Myanmar is a fascinating and beautiful country, but the coffee leaves a lot to be desired. That is, until we visited the charming hill town of Pyin Oo Lwin, a two-hour drive from the city of Mandalay.

Founded by the British in 1896, Pyin Oo Lwin was originally called Maymyo and was designed as a place to escape the Mandalay heat. The town is still peppered with colonial homes and churches, which make for an interesting walking tour. Another point of interest is the National Kandawgyi Botanical Gardens, established in 1915.

More recently, Pyin Oo Lwin has become the centre of Myanmar’s rapidly growing coffee industry. A number of factories in the town process coffee beans for country-wide distribution, with a growing amount now prepared for export.

Showcasing the region’s best coffee is Pan Taw Win, a café, restaurant and nursery rolled into one. Here you can choose from a selection of different coffee beans, ensuring you get the perfect cup of coffee.

If you’d like to see how the coffee is made, I suggest you pay a visit to Sithar Coffee Plantation, which produces coffee for Sithar Coffee Company.

Sithar originally imported beans from the coffee-growing countries of Latin America, the Caribbean and Africa, for roasting in Myanmar. Then in 2004, it began growing its own Arabica coffee at its coffee farm in Pyin Oo Lwin. It now supplies coffee, equipment and ingredients to more than 500 hotels, restaurants and cafes across the country.

Also grown in Myanmar is Robusta coffee, as well as Liberica coffee and Excelsa. About 80% of Myanmar coffee is grown by small farms using basic processing methods. However, this is likely to change as the industry expands and demand continues to grow.

Here’s a brief overview of the four different types of coffee beans I mentioned:

Robusta: Second biggest player in the coffee market, with almost double the caffeine of Arabica. High-quality Robusta beans are smooth, free of bitterness, and intensely flavourful with distinct chocolate notes.

Excelsa: Accounts for about 7% of global coffee production. Excelsa grows mainly in Southeast Asia, where it is used as a blending coffee to add complexity and depth. It has a distinctive tart, fruity, dark taste.

Liberica: An entirely separate species of coffee, with a very distinctive taste profile. It has an exceptional aroma, with a full and slightly smoky flavour. However, some people think it tastes too woody.

Where to Find The Best Coffee in The World