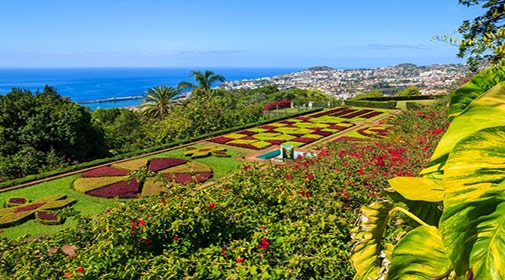 Madeira is known as “the Garden Island” and it’s a fitting description for one of the prettiest islands my husband Duncan and I have travelled to on our roving retirement. This archipelago, an autonomous region of Portugal, lies in the North Atlantic Ocean and if it’s not on your bucket-list, it should be.

As you drive around the island, purple and pale blue Hydrangeas and blue and white Agapanthus grows wild beside the roads. Eucalyptus trees, originally from Australia, send out their strong, earthy smell reminiscent of bottles of the oil back home in Sydney.

The steep slopes above Funchal are a market gardener’s heaven. Madeira grows enough vegetables to sustain the population, all grown in terraces clinging to the steep sides of the mountains. 80% of bananas grown on Madeira are exported, whilst many fruits are imported to this small island.

Make a date in your diary to visit the Mercado in central Funchal, the capital, on a Friday or Saturday. It’s the busiest day for the local farmers to sell their vegetables.

Colourful flower stalls are set out and run by ladies in traditional Portuguese dress. The fish market is busy every day from Monday to Saturday. Look out for the black scabbard fish, local to Madeira, a white fleshy fish that is used in the local dish called Espada served topped with a cooked local banana. Tuna is also plentiful and dished up in various ways; soups, raw in sashimi, grilled and added to onion stew.

If you visit Madeira in March you will enjoy the Festa da Flor (Flower Festival). Flower carpets cover the ground of the main roads within the historical centre. It culminates in a parade where adults and children dress up in floral artistic creations. During summer you may even witness a local church fiesta, carpets of flowers line the pathways leading to the local church. Young children and their parents enjoy putting together the colourful display.

Madeira’s local alcoholic drink, Poncha, is an acquired taste. It is made from aguardente de cana (fermented sugar cane juice), honey, sugar, lemon rind and lemon or passionfruit juice.  Any more than one at lunchtime may see you sleeping away the whole afternoon and possibly the night, depending on its strength. Legend states that Poncha was given to the sailors on their arrival back in Madeira after months at sea who had contracted colds and sore throats on the voyage.

Madeira is most famous for its wine, which has been drunk for over 500 years. Another famous legend states that in Shakespeare’s Henry IV, Falstaff was accused of exchanging his soul for a chicken leg and a glass of wine from Madeira. Winston Churchill, a frequent visitor to the island, enjoyed many a glass or two… and if you travel to a small village outside Funchal called Camara de Lobos you can sit in Churchill’s Bar and enjoy some for yourself.

Pasteis de Nata, the local Portuguese custard tart is addictive and cheap at under $1 at the local bakery.

The local bread, Bolo de Caco, is a flat circular shaped bread cooked on a flat basalt stone. It can be served with octopus, espetada (beef with garlic and salt) or as a prego, which is similar to a steak sandwich with fried onions or just slathered with garlic butter.

If you enjoy hiking Madeira is well known for its levada walks. The levadas criss-cross the island offering 2,500 kilometres of walking trails. The levadas were constructed in the 16th century and channel the water from the higher wetter grounds of the island to the lower sun-parched areas towards the South.

Madeira has a lot to offer at any time of the year. Have you visited?