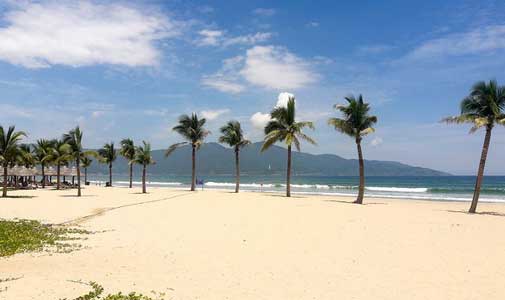 One of the best things about my role as IL’s Vietnam Correspondent is the like-minded people it’s brought me into contact with and the opportunity it’s given me to share with them all that Vietnam has to offer. Everyone I’ve met who has come to Vietnam has been surprised—in a good way—by what they’ve found.

Take Claire and Stephen Goulding for example. I first met them in February this year at the Fast Track Your Retirement Overseas Conference in Brisbane. (We’re having another event in Bangkok in February 2019 and we’d love for you to join us. Find out how, here. Vietnam captured their imagination and just a few weeks back they made their first trip here.

We met up in Hanoi, where I live, for dinner and a cup of Vietnam’s famous egg coffee. “We really like Hanoi,” says Claire. “The people have been delightful everywhere we’ve been.” The couple were surprised at the beauty of the country and the mix of Vietnamese, French and Chinese architecture they saw.

Expats Robin Barnes and her fiance, Mark, are on their second year of living in Vietnam. They’ve been continually surprised by how friendly the people are and by the natural beauty around their home in the central coast city of Da Nang.

“Da Nang is a modern, vibrant city in which people are generous with their kindness and their laughter. We are surrounded by beauty unlike anything that we have ever seen: a turquoise ocean, a green city and the entire area is ringed in by mountains. I’m so much more peaceful and less stressed now—living here has made me a happier, healthier person,” says Robin.

Grace and James Bogert retired to Da Nang in 2015. The warm welcome they received delighted them. “We’ve been invited into people’s houses in Hue and have Vietnamese friends in Hanoi who have come to visit us here in Da Nang,” says Grace. “People are very friendly here. Recently, some Vietnamese kids invited us to go to a school dance. It was so much fun. Apart from the English church services that we attend, our social life is almost totally with local friends we’ve made.”

Carol Mitchell, 63, lives in Da Nang with her husband, Dan. It’s the safety and the friendliness of the people that most surprised her. “People really want us, as foreigners, to have a good experience here and they go out of their way to be helpful to us and show us a lot of friendliness, care and concern,” she says. “The younger Vietnamese people really enjoy getting to know people of my age. They want to spend time with us. All our friends here are the age of our kids. It keeps you young.”

Back in 2017, I met 71-year-old Ron Piltzer and his wife, Cylvia, in Bali when I was on a scouting trip for International Living Australia. Last month, we met again—this time in my adopted home of Hanoi.

Ron had an idea about what to expect when he came to Vietnam, but when he got here, he was surprised. He asked whether we often see tanks in the streets and if there was a strong military or police presence. He was surprised when I explained the police keep a very low profile and that the only tanks I’ve seen here are the old relics at the museum. “What surprised us the most was the quality of the infrastructure in the areas we went, along with the quality of hospitality we received,” says Ron.

I first met Sydney-native Gary Stapleton, 65, back in 2016. Having made the move to Vietnam, he was won over by the sense of freedom he discovered here.

“Honestly,” he says, “after living here, going back to Australia full-time would be disappointing. Australia is very regimented. I don’t feel like I’m really living when I’m there; I’m just in a holding pattern. Vietnam is so different. People here have a great deal of respect for older people. It’s a day-to-day place. They don’t have a five-year plan, a one-month plan or even a plan for next week. It’s chaotic and stimulating and spontaneous and I like that. Vietnam is vibrant, entertaining and interesting.”

As for me, I’m constantly surprised at how accepting the Vietnamese are of people from different cultures. They’re genuinely curious and the hospitality I’ve experienced over the years is second to none. That’s a surprise I’m happy to live with.