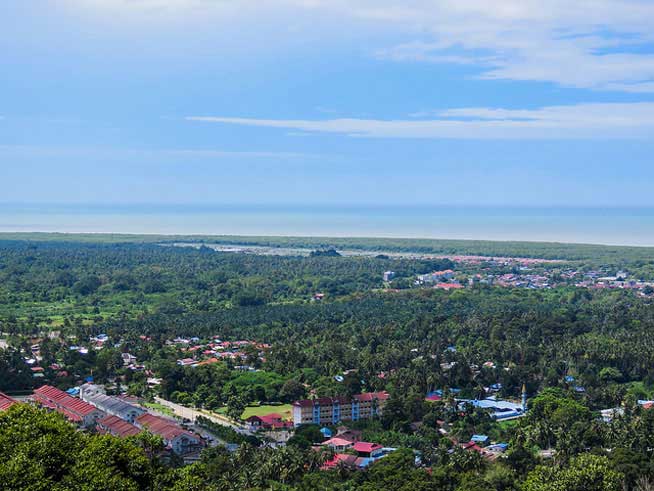 Sitting on my balcony just off the living room, I’m completely surrounded by 30-metre-tall, 200-year-old trees. Sipping my coffee early in the morning, there is one tree that always holds my attention as it’s surrounded by fireflies. I’d never seen them before moving here and it’s quite magical.

My wife Lisa and I live on the island of Penang, Malaysia, in an old colonial town called George Town. We’ve moved twice since arriving here six years ago from Sydney. Our current apartment—all 186 square metres of it—faces the green hills of the Botanic Gardens. It was the first thing that I noticed when I walked in the door when we came to view it. Sure the intricate parquet flooring and tall ceilings helped, but it was the view that provided the hook.

Another thing that I love about where I live is being able to stroll to Gurney Plaza shopping centre—a mere seven minutes away—and just two minutes away there are three great little cafes.

Penang has a charm about it that has weaved its magic time and time again over the last two hundred years. George Town is picture pretty with lots and lots of colonial architecture. That’s a rare thing in Asia where everyone tends to prefer the new to the old, and cities like Singapore and Hong Kong have lost the charm that George Town has managed to retain.

I spend a lot of time both in George Town exploring its narrow streets, and in the Botanic Gardens exploring its pathways and trails. There are over 50 of them that I know and more that I don’t. I once stumbled upon a pathway that took me to the most gorgeous waterfall. Another meander led me to uncover an old World War II gun emplacement, hiding beneath jungle growth. It’s crazy what’s still out there just waiting to be found.

Our apartment building is about 20 years old and there are only nine floors. Its high ceilings and fans keep it cool through the day. All the rooms are air-conditioned and our landlord is fantastic. We pay $900 a month, and when we moved in we asked for a new washing machine and fridge that she supplied at no extra cost. She threw in a 12-person dinner service and cutlery as a bonus. When we have issues she fixes them immediately. The apartment also comes with two car spaces; we use one and rent the other one out, a swimming pool and a gym.

Although we do a lot of our own cooking, it’s cheaper to eat out. Local Malaysian dishes can be picked up from street stalls for a couple of dollars. Half a dozen sticks of chicken satay with a rich peanut sauce cost just a few dollars. Dining at an international restaurant is also good value and we rarely pay more than $30 for the two of us.

Penang is famous for its food and there is no shortage of choice. Its street food is the best in Malaysia and some of the vendors are so sought after the lines for them go around the block. Many of them won’t set up until after midnight. That being said, burgers are popular here too and in the Tanjong Bungah area, just 10 minutes’ drive away from where we live, there is a burger seller that sets up in the forecourt of a bakery when the bakery closes at 6 p.m. For just $5 you can have an Emu burger with a full plate of fries and a salad. Now that’s good value!

Penang is a fun place to live. Art galleries, live theatre, daily and weekly markets and more festivals than you can imagine. It’s a holiday place that’s quick to become home given the low cost of renting and easy living. Oh, and did I mention that everyone here speaks English?