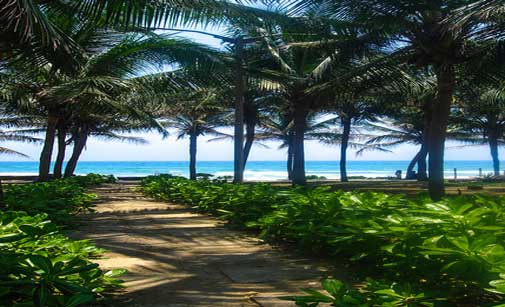 It’s a balmy day, perfect for a stroll. A gentle breeze ripples through the trees lining the wide, leafy boulevard I’m walking down. The scent of freshly roasted coffee drifts out from chic cafes lit by twinkling chandeliers, and glittering designer boutiques lead the way down to the riverfront.

But it’s not the banks of the Seine I’m headed for. It’s the Saigon River. Because this is Ho Chi Minh City.

It’s probably not what you imagine when you think of Ho Chi Minh City, owing to its reputation for crazy traffic and crowds of sightseers. But rush hours come and go in any city, as do tourists. Whereas the surprises in Ho Chi Minh City, and indeed all of Vietnam, just keep coming…

Vietnam is the perfect place to base yourself for a part-time overseas retirement. Direct flights to Australia from Ho Chi Minh City take less than nine hours. Even with a short stopover, you can still be back in under 12 hours. Plus you’ll be ideally located for exploring the rest of what Vietnam has to offer…and that’s a lot.

Snuggled into a river network on the coast of Vietnam, roughly halfway between Hanoi and Ho Chi Minh City, Hoi An is romantic and magical…and my favourite place in Vietnam.

People flock from all over to enjoy Hoi An’s lantern festivals, canals, beaches and climate but the good news is, even though it’s a tourist mecca, you won’t find inflated prices here, as Dave Cole and his wife, Christie, discovered in the three months they spent there.

“Vietnam’s one of the cheaper places to travel but when you settle in for a longer term, it’s even cheaper,” says New Zealand native Dave. “Bed and breakfasts are a perfect way to get to know a place; they’re less formal than hotels and you get to know the staff and owners—who will often do great deals if you’re happy to commit to staying for a few weeks. We had a comfortable, en-suite room for $30 per night; breakfast was included, as was the use of bicycles to get around and a pool to cool off in.

“We spent a month there and later rented a house in the same area for $470 per month; it had two-bedrooms, air-conditioning and came furnished. It wasn’t lavish but it was fine for our needs. You’ll need to pay a bond and rent in advance, so going through a third party, such as a real-estate agent, is a good idea. Power, water, Pay TV and internet worked out at about $107 per month. An average day’s spending worked out to be around $50 for us both. We ate out every night, lived comfortably and never at any time felt we were scrimping. Hoi An’s a good fit for almost anyone’s budget.”

Vietnam is opening up. An estimated 100,000 expats have chosen to make their home here and, as one of the fastest growing economies in the world, the opportunity for foreign-owned businesses is strong. Add to that low start-up costs and minimal overheads and you’ve got a seriously exciting prospect for adventurous entrepreneurs.

On a recent visit to Da Nang, I popped into expat-owned Six on Six, a charming cafe set in a tropical garden, tucked away down a quiet alley. The savvy couple running Six on Six wiped out their rental costs by renting rooms on Airbnb and their cost of living in Da Nang is half of what it was back in Melbourne. Little wonder expat business is booming here.

But running a business isn’t the only way to make money in Vietnam. IL’s Roving Correspondent Sharyn Nilsen and her husband, Tim, make themselves at home in a spacious, two-bedroom apartment in Ho Chi Minh City for around half the year. Here, they teach English part-time, earning $2,000 a month…each. Vietnam’s low costs and their income from teaching allows them to spend the rest of the year travelling—so far they’ve been to 130 countries and they’re far from done.

Of course it won’t surprise you to hear Vietnam is low cost, but just what great value you can find here is astounding. Sharyn and Tim’s Ho Chi Minh City home runs them $900 a week, but that includes Pay TV, WiFi, a cleaner two days a week and the use of a small gym. They get their dinner delivered five nights a week for $35 and on weekends they dine out at a local restaurant where a tasty dish of barbecued pork, marinated vegetables and rice can be had for just $2.

Add there’s more…$4 manicures, 40 cent bus rides, beers for $1.50 and decadent, 90-minute, hot rock massages for $25… It’s not hard to see why expats are flocking to Vietnam in growing numbers.

And that’s just for starters. Fun, sophisticated, affordable, exciting…that’s the Vietnam I know. Where getting by in English is a breeze, locals are friendly and helpful and expats are more than happy to share the hidden gems and secret spots they’ve discovered with you.

And when I wasn’t making new friends or meeting old ones, I explored hidden parks, wandered for hours following winding streets, sat sipping cocktails in riverfront restaurants and bounced around bars well past anyone’s bedtime…and all the while I didn’t just feel safe, I felt downright lucky.