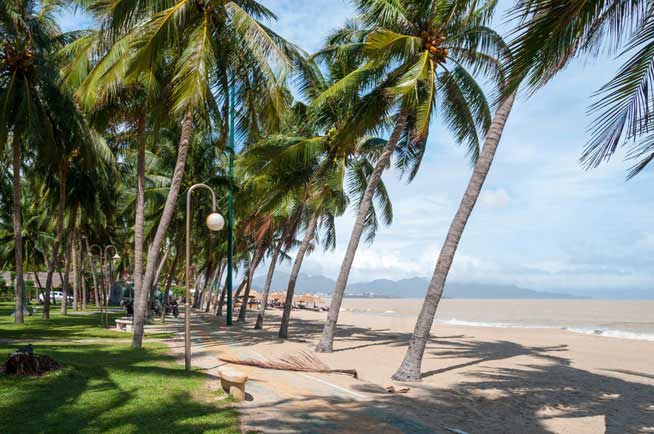 It’s impossible to keep Jo Thomson and her husband Marc Brand, both in their 60s, in one place for long. For them, living the “good life” means bouncing around the globe to hidden corners of the world that some of us only dream of visiting. For many years, they’ve had a particular interest in the delights and mysteries of Southeast Asia, and they’ve found a remarkable home base from which to explore the region: Nha Trang, Vietnam.

Nha Trang lies on southeastern Vietnam’s Nha Trang Bay, about 440 kilometres northeast of Ho Chi Minh City. It’s a popular Vietnamese holiday destination, with more than six kilometres of beaches. And it’s home to 400,000 people, including hundreds of expats. The city has a tropical climate, with high temperatures ranging from 27 C to 32 C and lows in the high 20s. Best of all, Nha Trang has a long dry season, which runs from January to August. It experiences its heaviest rainfall in October and November. Mountains surround three sides of the city, and a large island just off the coast shelters Nha Trang during heavy storms.

Life abroad brought Jo and Marc together, and their passion for travel has never abated. They met in 1982 in Saudi Arabia, where they were both working, married in Cyprus and spent their honeymoon backpacking through Indonesia, Malaysia, Turkey and Greece. Even after having two sons, they continued to visit Mexico and Central America—and spent a few years living in Japan when the kids were young. Before retiring three years ago, Marc worked as a teacher and Jo as a school nurse. They enjoyed their careers, but when it came time to retire they returned to the adventures of their youth.

A Lifestyle Many Retirees Long For

Marc and Jo spend about eight months of the year living in Southeast Asia and discovering new places throughout the world. For the past two years, they’ve used Nha Trang as a jumping-off point for exploring the Southeast-Asian countries they love most: Vietnam, Cambodia, Laos, Thailand and Sri Lanka. Their Nha Trang way of life practically defines the lifestyle many retirees long for.

“Being by the ocean during the great weather months has been the major appeal,” Marc says. “We go on long walks in the morning. In the afternoon, we relax, go on adventures in town, read at the beach, or go to a beach club, where we can swim in the pool and rent a chaise longue for about $4. After our late-afternoon walk, we relax at home and then go out to one of our favourite restaurants—Vietnamese, Japanese, Indian, Korean, you name it. Some nights, we go to local expat-run bars for live music—rock, blues or jazz are popular choices.”

A Lower Cost of Living in Nha Trang

Overall, Nha Trang’s cost of living is low, enabling Jo and Marc to live a full life without worrying about expenses. “You can rent a house in Nha Trang for as little as $270 per month,” Marc says. “We rented a modern studio apartment—a five-minute walk from the ocean—that was fully furnished and included Pay TV, WiFi, a small kitchen, maid service, laundry six days a week, a security guard, a weight room and utilities for $400 a month.”

Long-term hotel stays are available for as little as $270 a month, and you can find plenty of short-term and long-term apartment rentals, most of them furnished.

Grocery prices don’t put much of a dent in Jo and Marc’s budget, either. The French colonial legacy left residents with a taste for fresh baguettes, which these days cost about 50 cents, and the couple can buy a dozen eggs for under $2. A kilogram of potatoes costs less than $3, milk runs about $2.70 per litre, and a kilogram of tomatoes comes in at just over $1. Two litres of Vietnamese beer costs around $3.50.

Sign up here for IL Australia’s e-letter and we’ll send you a free postcard e-letter three times a week. We’ll also send you a FREE research report on Vietnam: Experience the Magic of the Orient.