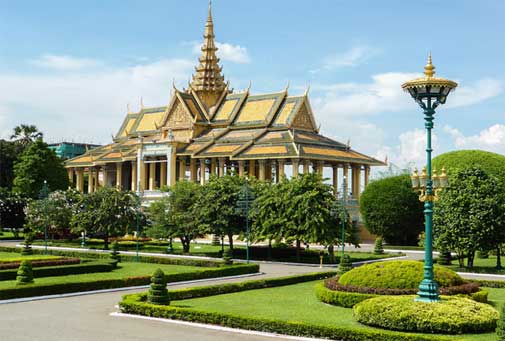 There are many excellent reasons why expats love living in Phnom Penh but if I had to pick the top five this is what they would be:

Imagine living in a city that is as vibrant as its exotic backdrop implies… Royal Palaces and Buddhist pagodas… beautiful colonial era landmarks… Parisian-style boulevards named in honour of Cambodia’s “God Kings”… No wonder Phnom Penh was nicknamed “The Pearl of Asia” as the capital city thrived during its post-independence era of prosperity and development.

An entire generation of talented musicians and artisans were encouraged in their creative endeavours by the King, leading to a modern cultural renaissance. Ancient customs like the annual Water Festival boat races were reintroduced while a new wave of Cambodian architects were inspired to develop iconic buildings such as the uniquely Khmer-style Independence Monument and Chaktomuk Theatre.

It’s fair to say most expats fall in love with Phnom Penh at first sight. I know I did.

More recently the official slogan for Phnom Penh was unveiled as “The Charming City” and I can say it is a very good representation of the people that live here. I have never met a more welcoming group of people and Phnom Penh has a long history of charming new arrivals…

When Charlie Chaplin honeymooned in Cambodia in 1926 he was made a guest of honour and even given a personal tour of the palace by the King himself. When Jackie Kennedy visited in 1967 she was greeted with pomp and pageantry fit for a head of state, including a Royal reception at Raffles le Royal Hotel where the famous “Femme Fatale” cocktail was created in her honour.

And it’s not only Royalty that value the importance of hospitality, it’s an endearing national trait among Cambodians who genuinely want visitors to see and enjoy the very best of their country. Come visit and you’ll find out for yourself how welcoming they really are. 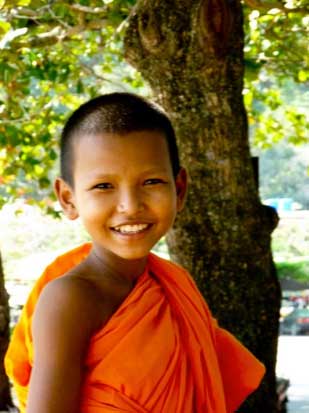 3. The Competitive Cost of Living

For a capital city so steeped in historic ambiance and so hospitable, you’d expect a certain premium on the cost of living. But that’s not the case in Phnom Penh where many an expat have reported monthly living costs as low as $1,426.

So, what’s the catch?

Well…there isn’t one. Moving here really is an instant and automatic lifestyle upgrade. Rent a very nice Western-style apartment in the heart of the city for $450… Enjoy an ice-cold schooner of beer at a bar with a great view for as little as $1… Dine out at high quality international restaurants for less than $10 a person… Get one week of unlimited phone calls with 10GB of mobile internet for only $2… You can even pay a cleaner a very reasonable $12 to keep your apartment spick and span on a weekly basis. Even those on the most limited of incomes can have a lifestyle here which makes their friends back home extremely envious.

A beautiful, charming, and affordable city is all well and good but expats wouldn’t last long in Phnom Penh without having a social scene to tap into. This is another area where the city excels with every type of expat pub, wine bar, sports bar, sky bar and karaoke bars on offer. 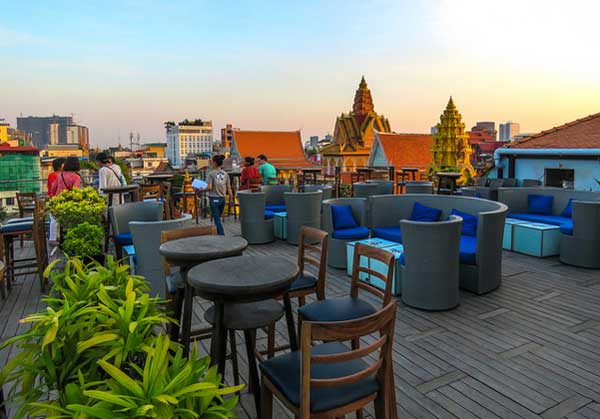 If booze isn’t your thing then there is also a vibrant coffee shop scene as well as a wide range of gyms, sports clubs, golf courses and even Aussie Rules football teams to keep you busy.

There’s also a local AusCham setup in Phnom Penh if you want to meet fellow Australians and do some business networking as well as meet some fellow countrymen.

5. It’s so Easy to Travel the Region

Living in Phnom Penh does not mean you have to stay here all the time and thanks to the country’s location at the heart of Southeast Asia you are only ever a short hop away from the rest of the world. Millions of people pass through Phnom Penh International Airport every year and the airport and flights never seem to stop expanding.

To get to and from Australia simply fly to Kuala Lumpur, Bangkok, Singapore or Hong Kong and then catch a direct flight.

If you’re more interested in using Phnom Penh as a hub for exploring the region then there are hundreds of regional and international direct flights each week to pretty much anywhere you could possibly want to go.

But while leaving the city for a break every now and then can be fun you’ll be surprised at how happy you start to feel on the return flight back to Phnom Penh (or home as we expats like to call it).