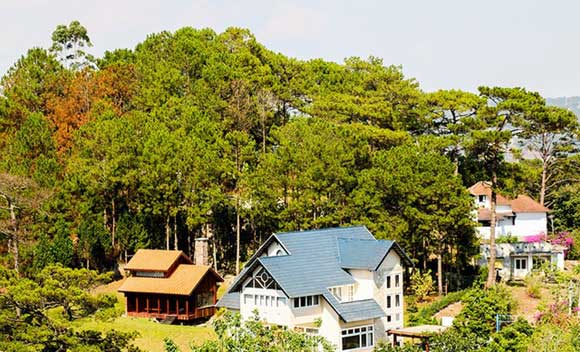 “I’m having trouble retiring,” says Chris Robinson. “I’ve had a number of times when I thought I’d stop working but it was too boring.” Chris, 68, and his wife, Monica, age 66, left their home in Valla Beach in 2004 and Chris began what he calls his “working retirement” teaching English in Asia and the Middle East.

The turning point in their lives came three years ago when they visited a teaching colleague in Ho Chi Minh City who they had worked with in both New South Wales and Abu Dhabi. They spent three days there, then came to Dalat, which is a 50-minute flight or a six-hour road trip northeast of Ho Chi Minh. “We loved the weather and the slower pace of life in Dalat,” Chris says. “We were in heaven.”

“The weather in Dalat is very similar to the north coast of New South Wales,” he says. “The winters are mild and spring and autumn are really pleasant. During these seasons, there is usually little rain and clear skies. The minute you get off the plane from Ho Chi Minh, you feel the peacefulness, the coolness and the low humidity.”

Chris’ colleague suggested that they come to Dalat to help out at the local language centre. Before long, Chris was happily back at work. “I’m teaching the teachers and the students. It’s a volunteer thing,” he says. “I like working, so being here is like the best of both worlds.”

When Chris isn’t volunteering at the school, he and Monica enjoy an active social life. There is a local expat group that gets together at least once a week, but Chris says that they find themselves interacting more with the locals. “Most of the people we socialise with here, especially other teachers, are Vietnamese. We’ve been the guests of honour at two weddings, we’ve been married for almost 46 years so they want that good luck to rub off on them.”

Dalat has one of the lowest costs of living in Vietnam. Chris and Monica’s monthly budget averages just $582 including $175 per month rent for their apartment. Utilities, food, petrol, motorbike maintenance and their incidentals make up the balance. Chris says, “The apartment, which is just a 15-minute walk to the city centre, was a bit of a dive when we rented it, but the owners said that it was ours and we could do what we wanted with it. So we painted it, knocked down a brick divider and installed new tiles. The rent was so low that it was still a great bargain.

“We find that it’s a lot more expensive for us to cook our own food, when we can go to a place and get a big bowl of meat, eggs, noodles and vegetables—a really filling meal that tastes so good—for just 86 cents,” Chris says.

Every now and again, they’ll treat themselves to a Western dinner. “Our favourite restaurant in town is One More Cafe, where we’ll go for a cappuccino and a sandwich. There’s a great Indian restaurant here called Ganesh.”

Dalat doesn’t have any international hospitals or top-end healthcare, so they both maintain health insurance with a medical evacuation clause through World Nomads. “They’re really good,” Chris says. “There’s an Australian Pensioner Insurance that we could get which costs $7,000 for nine months. World Nomads is doing it for $700.”

Dalat is known as “The City of Flowers”, and you’ll see bright splashes of colour everywhere you go. “Monica loves flowers, so we’ll often go to the market for those,” Chris says. “She just bought two bunches of roses for $2.92. Those sorts of things are so nice, we always have fresh flowers in the house.”

One of their favourite getaways is a visit to the five-star Edensee Resort for morning tea. It’s just six kilometres from town, right next to Tuyen Lam Lake. Chris says, “We stayed in a villa overnight for our anniversary. We explored the vast grounds and spent a lot of time wandering through the resort’s rooms, balconies and dining areas. The whole place has a very European feel. It’s a lovely motorbike ride with beautiful scenery.”

When it comes to retirement, Chris has this advice, “You need someone to love, something meaningful to do and something to look forward to. If you have those three things, that’s all you need. That’s why I’m here in Dalat. The fact that I’m doing something useful and it’s appreciated makes it worthwhile.”