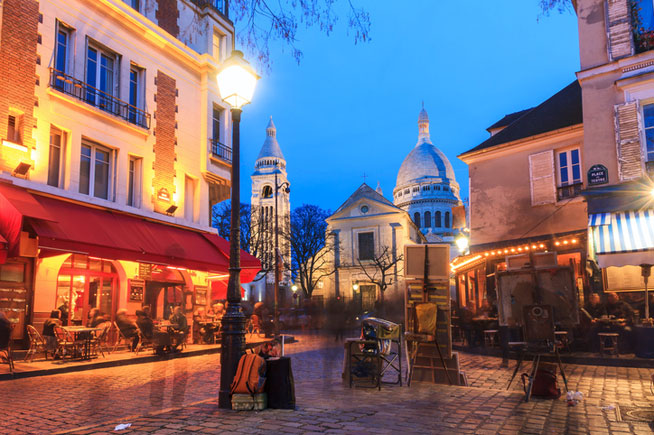 Most visitors to Paris think that sipping wine in a picturesque cafe with a gleaming zinc bar and woven wicker chairs is the ultimate Parisian experience…but we locals know that “real” Paris offers so much more than this traditional scene.

Dig a little deeper and you’ll find a world of unique cafes and hidden bars that are as modern, original and playful as any found in Sydney, London or New York…but always with that special French twist.

If you want to make like a local, here are my favourite secret cafes and bars in the French capital revealed just for you…

The French’s centuries-old love of literature comes to the 21st century in this warm, softly-lit cafe, just a 10-minute walk from the famous Place des Vosges, the oldest planned square in Paris. Here, more than 10,000 used books, mostly in French, are stacked from floor to the ceiling throughout the entire cafe.

Settle in and order from the light menu–this charming spot is known for their boiled eggs, as well as excellent Rosemary scones. Peruse the stacks for your book of choice and while away a pleasant hour or two reading in undisturbed comfort. Me, I love to head there with my laptop– the WiFi works great and it’s free. 111 boulevard Beaumarchais 75003. (Average snack: $10 to $14).

Tucked within a gorgeous stone 18th-century former convent just a few blocks from the Canal St. Martin, the artsy Cafe A is a hotspot in my neighbourhood but remains unknown to most Parisians, let alone tourists.

Stepping fully away from the traditional, the cafe resembles an immense urban loft with massively thick stone walls, cement floors and a scattering of huge wooden pillars. The cafe offers truly delicious food, including a variety of “detox” salads and more traditional fare, such as beef tartare.

When the weather’s warm, I like to order a glass of wine at the bar and sip it while lounging in the lovely tree-shaded walled garden behind the cafe–it’s an unexpected oasis of calm in a bustling urban area. 148 rue du Faubourg Saint-Martin 75010. (Salads from $10; main course from $23).

In a bustling city like Paris, sometimes a little time out is necessary. Animal lovers can find what they need in the “cafe of cats” near Bastille. In this cosy environment, you can cuddle with one of the cafe’s dozen or so kitties while sipping green tea, munching quiche Lorraine or sampling any of the other homemade classic French dishes on offer.

The cafe is home to several cats, adopted from a local shelter. Guests must follow a few rules, such as never to wake a sleeping cat or feed them, but you’re mostly free to stroke, photograph and play with the cats to your heart’s content. 9 rue Sedaine, 75011. (Salads from $18.50, main course from $22)

Many Parisian apartments are so tiny they can barely fit a washing machine, so every neighbourhood has a launderette with coin-operated machines. But there’s only one launderette in Paris–possibly even the world–that also has a cocktail bar hidden above it.

For a speakeasy, Lavomatic is surprisingly bright and cheerful. Playfully decorated with a laundry-meets-pop art theme, the bar offers ever-changing creative cocktails prepared by professional mixologists, such as “Drunk in Love” (cucumber gin, cream of black currant, crushed wild strawberries and pineapple juice). Light fare, such as raw oysters or a charcuterie (cold-cuts) plate, is also served.

To find the bar, head past the washing machines, push through the secret back door and take the flight of stairs to the third floor. Not a bad way to pass the time while doing laundry. 30 rue Rène Boulangère 75010. (Cocktails $16 to $18.50).

I’ve heard it said that it’s impossible to find good Mexican food in Paris–but that’s not true. The tiny taqueria Candelaria offers great tacos that people line up for. But the place has more going for it than its cuisine: there’s a miniscule cocktail bar hidden behind an unmarked door in the back of the restaurant.

Given that the bar has won international awards for its excellent agave spirit-based drinks (think: lots of tequila) it’s not such a secret anymore. Still, I find its incredibly cosy, candle-lit interior a special place to cocoon with a friend or two for the night. Reserve for the bar in advance. 52 rue Saintogne 75003. (Cocktails: $18.50)

Spend Time in Paris Without Spending a Fortune

The Secrets of Paris on a Budget

Splashing Out in Paris Thanks to a Money-Saving Secret