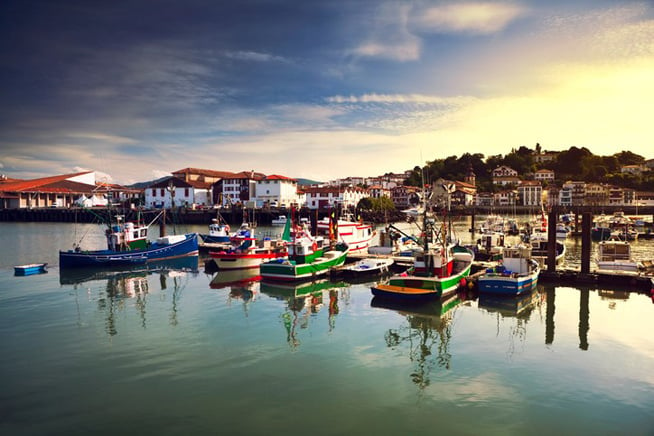 When I say that I spent a winter living near a beach in France, most people assume I’m talking about the French Riviera—home of glamorous Nice and glittering Monaco. And while I’ve certainly dipped my toes in the water off the coasts of both those places, where I actually chose to spend my time was on the southwestern coast of French, just north of the Spanish border.

This region is known as the French Basque Country. It has its own language, food traditions and culture and is neither entirely French or entirely Spanish. There’s lots of reasons why you should you visit, loads of charming places to stay and plenty to keep you entertained.

Read on for the inside scoop…

The regional capital is Bayonne—an inland city known for its chocolate—but if you’re going to Basque Country, I recommend staying closer to the beach and making Bayonne, which is quieter and less bustling, a day trip instead.

For those who love movement, hustle, shopping, lots of restaurant choices, pretty promenades and more than a little glitz…Biarritz is the place to be. The town is home to some of the region’s most popular tourist attractions—including the big local casino—and is a popular playground for the glitterati.

If you’re more interested in a quiet place to retreat after a day of exploring the region, head for Saint-Jean-de-Luz—my personal favourite spot in the area. Home to a cute, busy town centre and an equally cute and busy beachfront promenade lined with characteristic Basque-style townhomes, Saint-Jean-de-Luz also has a quieter side. Keep walking north along the main promenade and through the park and the crowds will thin as you get into quieter residential areas along the coast. Saint-Jean is also a great base for those doing a lot of exploring by train. The station is right in the heart of town (as opposed to Biarritz, where you’ll need to catch a bus to the train station just outside town).

Bayonne, the capital of the region, just a short bus ride from beachfront Biarritz, is where chocolate was first introduced in France. Brought in from Spain in the 1600s, early chocolate here was served hot, hand-whipped, slightly bitter and with handmade cream. Today, you can still find it served that way at Cazenave (19 Arceaux du Port-Neuf). Locals have theirs with a thick slice of buttered bread.

Back in Biarritz, there are plenty of foodie gems to be found, including the tiny, non-descript creperie Bleue de Toi on Rue Mazagran, where you’ll find cheap, paper-thin crepes that delight. The expat-owned Milwaukee Cafe, dishes up soft, homemade cookies and TexMex-style hamburgers will keep you coming back for more.

The Basque coastline is surfer heaven, but even if you’re not up for a surf lesson or a romp in the waves, finding a quiet beachfront spot to watch the pros at work is a real treat. Of course, beachfront walks, picnics and swims are also popular here, as is shopping in the winding streets of Biarritz, gambling at the casino or heading to Bayonne for the day to shop at the big fresh market.

Basque Country, like other sunny parts of Europe, is popular and can get crowded in the summertime. For slightly less crowds (but still excellent weather), make your way to the coast during shoulder season in September, October or even early November (when it might not be swimming weather, but there are still plenty of sunny days and you’re likely to have your pick of great apartments at even better prices).

Round-trip flights from Paris to Biarritz start as low as $130 and take about an hour. Trains run daily and tickets can be had for €24 ($33) one-way for the five-hour journey.

My own month based in Biarritz, living just a few blocks from the beach in the southern part of town, cost just €1,617 ($2,277). That’s including an apartment found on Airbnb, a whole lot of crepes and day trips to Bayonne, Saint-Jean and other nearby towns.