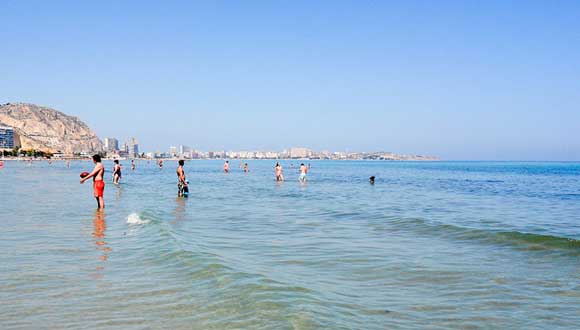 First, this is Europe. That means walkable cities (leave the car behind), with culture and history all around you. Want to stay in a restored castle or live in a centuries-old (but renovated) apartment? You can. Like museums? Science, art and history museums are all over, and many have hours when they’re free of charge. (Madrid’s Prado Museum, with its free evening hours, is a personal favourite. And you can admire Bilbao’s new Guggenheim Museum from the outside; the building itself, and its surrounding park, are the big draw in my book.) Like concerts? You’ll find everything from rock and jazz to opera and zarzuela (Spanish operetta). I’ve gotten concert tickets in Valencia, Spain’s third-largest city and a great centre for music, for €15 ($23).

Then there’s the climate. Warm to hot sunny weather is the norm in Spain…and there are lots of beaches. The Costa del Sol, on Spain’s southern coast, and the Costa Blanca, on the eastern Mediterranean coast, are great for those who love the sun. If your taste runs to cool, humid weather and green mountains, you can get that, too…in so-called “green Spain”: the northwest coast on the Bay of Biscay. For four distinct seasons, go farther inland. You can even find ski areas in towns near the Pyrenees, in northern Spain, or in the Sierra Nevada, in southern Spain near Granada, the city famed for its Alhambra and other Moorish treasures.

For me, though—as for many Spain fans—the big attraction is the lifestyle. It’s laidback, fun-loving, and (to my mind, at least) has the right priorities. The siesta? Greatest invention since sliced bread. (Try it; you’ll like it.) Long, filling, sit-down lunches with friends, family or even just work colleagues? Better than wolfing down a sandwich alone at your desk any day….

And the generally sunny weather means that outdoor cafes (called terrazas) are everywhere, perfect for enjoying a morning coffee, a leisurely lunch, a late-evening nightcap or a thirst-quenching drink any time of day. They’re great places to people-watch or meet up with friends…which the Spanish do a lot. Someone once described the Spanish as having perfected the art of hanging out, and Spain’s many terrazas are the perfect place to do it.

If you’re a foodie, you’ll be in heaven here. Spain is famed for its tapas—enticing little snacks that you wash down with a beer or glass of wine. But don’t let them spoil your lunch, the big meal of the day. And restaurants’ set-price lunch, or menu del dia, is one of Spain’s best bargains. Two courses, plus bread, beverage (which often can be beer or wine), dessert and/or coffee, usually comes in at €9 to €12 ($14 to $19). Or cook at home for even less—Spain offers plenty of supermarkets, but also lovely traditional markets in most cities. And in season, many fruits and vegetables cost just €1 a kilo (that’s just $1.55).

You’ll pay more for short-term, holiday-style rentals (offered by the week or month), but they’ll come furnished and with utilities included. They’re a great option if you want to live in Spain part time. They also give you the flexibility to try living in different regions, sampling all the variety that Spain offers.

You can get transcontinental flights to Madrid, often with stops in Barcelona. Fast rail and competent bus services all over Spain makes it easy to get around the country on public transport. And Spain’s many regional airports are home to discount airlines flying all over Europe, putting the entire Old World at your fingertips.