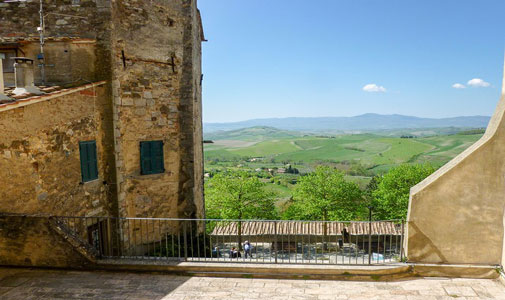 Religion: Christian 80% (overwhelming Roman Catholic with very small groups of Jehovah’s Witnesses and Protestants), Muslims, (about 800,000 to one million), Atheists and Agnostics 20%.

History: Italy became a nation-state in 1861 when the regional states of the peninsula, along with Sardinia and Sicily, were united under King Victor Emmanuel II. An era of parliamentary government came to a close in the early 1920s when Benito Mussolini established a Fascist dictatorship. His alliance with Nazi Germany led to Italy’s defeat in World War II. A democratic republic replaced the monarchy in 1946 and economic revival followed. Italy was a charter member of NATO and the European Economic Community (EEC). It has been at the forefront of European economic and political unification, joining the Economic and Monetary Union in 1999.

Italy has a diversified industrial economy, which is divided into a developed industrial north, dominated by private companies, and a less-developed, welfare-dependent, agricultural south, with higher unemployment. The Italian economy is driven in large part by the manufacture of high-quality consumer goods produced by small and medium-sized enterprises, many of them family owned. Italy also has a sizable underground economy, which by some estimates accounts for as much as 17% of GDP. These activities are most common within the agriculture, construction, and service sectors.

Italy is the third-largest economy in the euro-zone, but high public debt burdens and structural impediments to growth have rendered it vulnerable to scrutiny by financial markets. Public debt has increased steadily since 2007, reaching 133% of GDP in 2007, but investor concerns about Italy and the broader euro-zone crisis eased in 2013, bringing down Italy’s borrowing costs on sovereign government debt from euro-era records.

The government still faces pressure from investors and European partners to sustain its efforts to address Italy’s longstanding structural impediments to growth, such as labor market inefficiencies, a sluggish judicial system and a weak banking sector. Italy’s economy returned to modest growth in late 2014 for the first time since late 2011. In 2015-16, Italy’s economy grew 0.7% each year. In 2016, overall unemployment was 11.7%, but youth unemployment remains high at 37.1%.

The famous boot-shaped peninsula nation of Italy is surrounded by three seas: the Mediterranean, the Adriatic and the Ionian.

There are 20 regions, which are then subdivided into administrative provinces.

Italian is the official language. German is widely spoken in Trentino; Slovene is spoken in Friuli-Venezia Giulia; French is used in addition to Italian in Valle d’Aosta and the border area of Liguria. There are dozens of regional dialects that are still widely used throughout the country.

There are two independent city-states within the borders of Italy: the Vatican State and the Republic of San Marino. San Marino is the world’s oldest republic.

The oldest university in Europe is in Italy – The University of Bologna was founded in 1088 and has been in operation ever since. The first formal medical school was the Schola Medica Salernitana in Salerno, founded in the 9th century. It combined Greek, Herbrew, Arabic and Latin medical texts for the most comprehensive medical studies available at the time.

Italy has a national healthcare system that provides affordable universal coverage. Legal residents can enrol for full accessible coverage with an affordable annual fee; employed residents have their healthcare contributions provided by their employers. There are also private clinics, hospitals and specialists options available with fees for service. Private health insurance for these providers is also available.