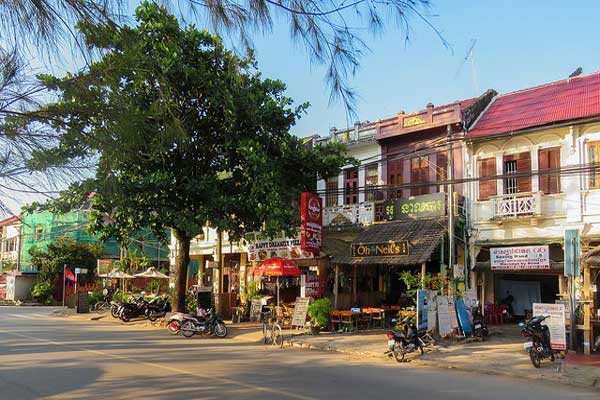 If you’re after a cool destination near the water, then the Cambodian riverside town of Kampot should be on your radar.

Kampot is very near to Bokor National Park and Bokor Hill Station so many visitors use the town as a base for visiting these unique spots. The top of Bokor Hill is well known for the colonial ruins of an old French casino called Bokor Palace Hotel as well as the old Catholic Church and the King’s “Black Palace” which were all abandoned during WWII and the civil war period.

Since then they have become a major local attraction with tourists due to the remote ghost town feel of the location.

In recent time a local hotel franchise built the Thansur Bokor Highland Resort not far from the ruins. This gives visitors the option of staying overnight since the drive from Kampot and up the mountain is quite long and hard going. They also have three different international and Asian restaurants including a buffet at the hotel, not to mention a full casino should you feel the urge for a flutter or a go on the pokies.

The old ruins remain open for tourists but only visit if you are used to cooler weather as it’s at quite a high altitude and the temperature regularly drops under 20 C, with almost zero visibility during cloudy and foggy spells in the rainy season.

Kampot is known around the culinary world for producing the famed Kampot Pepper which is of a high quality with a complex aroma and taste that has made it a staple of well-known celebrity chefs including Gordon Ramsay, Rick Stein and the late Anthony Bourdain.

It is also a popular centre of fruit production, with Cambodians paying top dollar to buy seasonal and highly pungent durian fruits.

Personally, I adore the almost noxiously rotten smell and taste of durian but many people absolutely loathe it. Durians are so stinky that they are banned in most hotels in Asia since they leave a distinct odour which can stick around for an entire week.

Whether you love it or hate it, you may not have much of a choice but to tolerate it. During Durian season, sharing the fruit with your guests is seen as a prestigious and lucky way to conclude a meeting and to refuse would be extremely rude.

The central congregation point for visitors to Kampot is at the picturesque riverside road where many different Western and Cambodian owned restaurants, bars and guesthouses are located, all of whom offer great views of the riverside’s chilled-out surroundings.

There is a much smaller expat community here compared to Sihanoukville, the bustling resort an hour-and-a-half up the coast. Between 1,500 and 2,000 long-term expat residents call Kampot home. A number of expats are highly active in the tourist sector and there are a variety of online communities for people who have made the move here.

The Villa Vedici Hotel provides some fun in the water with kiteboarding and rafting. This has become a major draw for expats who either live in Kampot or who holiday here. If you want to do some intense kite and paddle-boarding and grab an adrenaline buzz, this is the place for you.

Expat Keith Black is based in Cambodia’s capital, Phnom Penh, with his family who are all big fans of Kampot, “We go down to Kampot at least one or two weekends every month for a family break,” says Keith. “We spend our time there taking part in really active water sports or spending the rest

of the time hanging out in restaurants like Rikitikitavi which serves the most excellent Khmer food.

“When we drive to Kampot we also always take a quick ride around the town to see what’s going on, the buildings and statues are really interesting and a lot of older places are constantly getting renovated and brought back to life.”

Property rentals are affordable here but it can be hard to find Western-standard accommodation here. This could mean having to settle on renting somewhere a little different to what you’re used

But you do get value for money. A fully-furnished, air-conditioned, one-bedroom apartment close to the heart of Kampot town can be had for as little as $250 a month.

Alternatively, a comfortable, furnished, three-bedroom, two-bathroom villa with a nice view of the mountains and a large garden could run you around $400 a month. And that includes a maid.

The expats I talked to about the cost of living in Kampot said that the town was one of the most affordable in the region. A single person can spend as little as $815 to $1,200 a month—inclusive of rent, food and social activities—if they stay full-time in Kampot.

Cost of Living in Kampot

I like the relaxing vibe that Kampot has and a retired couple interested in leading a slow-paced life would have an easy time keeping themselves busy and happy here.