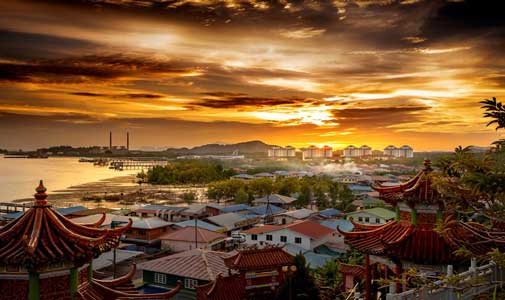 The city of Kuching in the Malaysian state of Sarawak, on the island of Borneo, oozes colonial charm and beauty. I could easily live here. The charm is everywhere, from tiny cafés and bistros in narrow lanes that lead down to the river, to the hills surrounding the town in the distance.

There is a sense of community here and at night the live entertainment in the same cafés, squares and riverside bars brings everyone together. In many ways it reminds me of Salamanca, Spain and ‘The Plaza’, where people gather at night to shop, eat, drink, meet people and be social.

China House at the Courthouse is where this happens in Kuching and as I approached the bar to order a drink one of the locals who was in a group of five asked what I was drinking and insisted on buying my wife and I a round. After a few minutes of welcome chatter, they left with a “Welcome to Kuching! Make sure you come back!” It set the tone for what was to be a fun-filled four-day break in a town that has a distinct colonial history unlike any other in Asia.

Having worked in Hong Kong many years ago I had a nice lifestyle and although I was travelling every month to a different city in Asia, I never had the time to really appreciate what that particular city had to offer. One town looked just like another and all I was seeing was the inside of an office before heading off again.

Retiring to Penang in Malaysia changed all of that. Suddenly when I visited a place, a place that I had been on business, I saw it with new eyes. The lifestyle change, one that I made to take advantage of a lower cost of living, was easy, and all I really remember about it now is wishing that I had done it sooner. It’s been nine years now and I don’t regret a single moment.

Living in Penang allows me to take long weekend breaks to incredible cities like Kuching, just an hour-and-a-half flight away. And it’s inexpensive. From Penang, there are direct flights with Air Asia, and a return trip was just $120 per person. The Pullman Hotel, right in the centre of town, had off-season rates starting at just $70 per night.

Annie Mehra Cannon, an Australian living in Kuching, moved here when her husband, Mike, took a job managing the international conference centre. When his contract expired they decided that it was where they wanted to retire. They promptly took out MM2H (a long-term visa that allows you to live in Malaysia for 10 years) and are happily at home in Kuching.

Annie says, “We had no intention of returning to Australia and in the years that we have been here, Kuching has developed into a café, cultural city. The Kuching Fringe Festival, followed by The Kuching Rainforest Festival, has really put Kuching on the international map.”

I have to agree. We were there to support The Rainforest Fringe Festival, as it was being run by no other than Joe Sidek, legendary Director of the George Town Festival in Penang. This was the second year of the fringe festival and the Sarawak Government were 100% behind supporting the event and making it a success.

Kuching itself is synonymous for ‘White Rajahs’, cats and some of the best food in Malaysia. James Brooke, an English adventurer pirate, was given the state of Sarawak in 1841 as a present from the then Sultan of Brunei for helping to crush a rebellion against him. Brooke quickly declared himself Rajah, as you would, and quickly went about modernizing the state. His family then ruled Sarawak, basing themselves in Kuching, until 1946.

During their reign they developed a state-of-the-art sanitation system and hospital, a prison, a fort and a bazaar that allowed all of the tribes of Sarawak to come together to trade freely without fear of their lives. It’s that cultural melting pot that adds colour to this once colonial city.

Kuching is known as the “Cat City,” but no-one knows why for sure. One legend goes that when James Brook arrived in the area he pointed and asked what the settlement was called. Mistakenly thinking he was pointing at a passing cat, a local told him it was called “Kucing,” the Malay for cat.

The Sarawak River is the very heart of Kuching and the market, shops and cafés that adorn its riverbanks add to its cosmopolitan vibe. At night it really comes alive and I swear that at least half of the city are there meeting friends, watching a show, eating and just enjoying the tranquillity this wide, fast flowing river.

There are a number of very good antique shops here too, and due to the number of shipwrecks that took place off the coast, there is a plethora of ship related antiques. More than I have seen anywhere else in Malaysia.

The best place in town to eat and one of Kuching’s best-kept secrets, is Top Spot Food Court. From the outside it looks like an abandoned multi-story car park, but what’s unusual is the amount of people constantly going in and out. There are no advertisements outside the building telling you what was there either, so we decided to explore and were blown away by what we found.

The buildings top floor has been converted into massive food court teeming with locals, hundreds of them, enjoying what is arguably the best seafood in Malaysia. Penang seafood is very good, but this was spectacular. King prawns, lobster, grouper, soft-shelled crab and midin—a crispy wild jungle fern stir-fried with garlic—just to name but a few of the choices available. I’d go back to Kuching just to eat there!

Of course, there were others places to visit too. The Sarawak Museum is the oldest museum in Sarawak and it didn’t disappoint. This three-storey colonial building covers natural history, regional archaeology and the numerous ethnic groups living in the area.

Just down the road on the other side of the river are the State Legislative Building (an architectural marvel), Brooke’s fort, and a number of traditional Malay kampongs (villages). It’s here, among his people, where Brooke felt most at home. Still revered by the local people it was impossible to find anyone who would say a bad thing about him.

The highlights of The Rainforest Festival for me, and there were lots of highlights, but the absolute ultimate highlight, were the Australian band, Electric Fields. This three-man band raised the roof and blew us away.

It also made me realise how small the world is. Here we were, two Australians in Kuching, on the island of Borneo, listening to a band from Adelaide at a Kuching festival. Life in Malaysia is exotic, affordable and it isn’t that far from home, no matter where you live in Malaysia.

I never get bored here and I think my life here is as close to perfect as it will ever be. We have already made plans to attend the festival again next year and I can’t wait!

Living in Malaysia: The Pros and Cons

The Best Diving in Malaysia