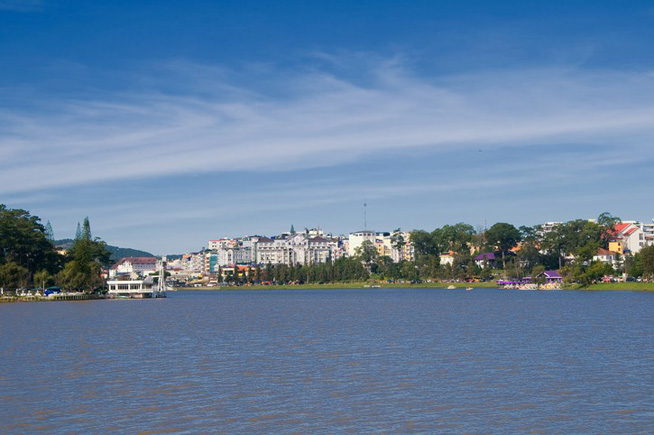 You probably don’t think of pine forests in Vietnam  but that’s what you’ll find around the Central Highlands town of Dalat. Until 1954 it was the premier French hill station and cool-weather retreat of the last Emperor, Bao Dai.

Though it’s just 300 kilometres north of steamy Ho Chi Minh City, Dalat’s 1,500-metre elevation means it enjoys a spring-like climate year-round—the temperature averages 18 C—and surprisingly low humidity. Fog hugs the valleys in the early morning and later blue-sky days give way to starry nights. It’s warm enough for a t-shirt during the day and cool enough for a jumper in the evenings. You won’t find air conditioners or heaters in homes or hotels here, there’s just no need.

From the moment my husband David and I arrived in Dalat, our senses kicked in. The sights and smells of flowers in bloom hit us wherever we went; they’re planted on almost every street, in every park and all along Xuan Houng lake, the centrepiece of the city. They bring bursts of colour to the busy market and change from week to week in the parks…a sea of yellow turns to red…then orange…

We first came to Dalat over 10 years ago. Back then the traditional market in the centre of town was the go-to spot for household goods. The town is now home to a Big C supermarket but every expat I’ve spoken with continues to shop at the market for their flowers and produce; orchids, roses, coffee and vegetables all grow in the valleys surrounding the city.

You’ll find high-end resorts and world-class golf in Dalat, but the market remains the beating heart of the town. Here hawkers wearing conical non la hats sit beside tubs of live fish and crabs or in front of tables loaded with shining, fresh strawberries, mulberries so full of juice they look like they could burst, pyramids of prickly artichokes and tremendous baskets of perfectly ripe avocados.

68-year-old Australian retiree Chris Robinson has lived in Dalat with his wife, Monica, for nearly three years. The cool weather and relaxed pace of life were big draws for the couple, who are regular visitors to the market. “Monica loves flowers, so we’ll often go to the market for those,” says Chris. “She just bought two bunches of roses for $2.92. Those sorts of things are so nice, we always have fresh flowers in the house.”

With such delicious, fresh ingredients available you might opt to channel your inner Matt Moran in the kitchen, but when it comes to dining out you get great value. John Pearce, a 63-year-old expat, likes Com Curry. He often goes there with his girlfriend and her daughter and the bill for the three of them comes to less than $5. “A big bowl of rice and curry costs $1.17, a plate of fried rice is $1.46 and tea comes free,” he says.

Prices are low here, even for Vietnam. John welcomed us into his modern and comfortable 150-square-metre furnished house in a quiet, residential neighbourhood. It has secure parking, a huge, well-equipped kitchen, spacious bathrooms and beautiful wood-floored bedrooms—it’s an impressive house. His rent is just $468 per month and he pays about $160 annually for electricity.

Chris, Monica and John are just three of the 200 or so expats who make their home in Dalat. One of the highlights of my trip so far was a luncheon at expat-owned One More Cafe. Twelve of us, from nine different countries, spread out over five continents, gathered together over a smorgasbord as diverse as the diners…smoked salmon quiche, asparagus salad, fried rice, couscous, miso soup and red velvet cupcakes… It was a real insight into Dalat’s expat community who hold get-togethers at least once a week.

In the late afternoon, David and I took a motorbike ride and found an al fresco coffee shop set inside a flower garden, right on the shore of the lake. From our table, we watched horses pulling ornate carriages filled with tourists around the water’s edge. The coffee we were drinking was made from beans grown just a few kilometres away and the scent of flowers filled the air. It was so quiet and peaceful we decided to linger and watch the sun set…