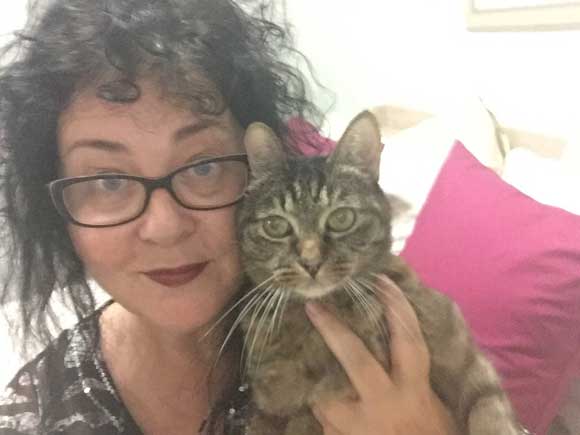 My life as a working mother in Australia was a frenetic kind of crazy, long hours at work and then off to the ‘second shift’ which involved picking up supplies from the shops, cooking the family meals and packing lunch boxes.

My weekends were filled with loose ends from work, doing the laundry and cleaning…if I could muster the energy.

Our dream home in the Blue Mountains meant a large mortgage, the kind that keeps you sweating. I was absolutely exhausted. My husband had been suffering health issues for some time which left him quite discouraged. The more we thought about the benefits of moving to the northern Thai city of Chiang Mai, the more it made sense…and since we made the move I’ve not regretted one minute.

But there were things to consider before moving—our property, all our stuff, more stuff in the cupboards, the junk in the shed and of course our 10-year old tabby cat named Honey. What were we to do with her? Where was she to go?

I considered rehoming her. I knew it wouldn’t be hard. She is quiet and very loving—and despite her ordinary tabby exterior, she is quite extraordinary. But deep down I knew that no-one could love her like I could and just a few weeks before we were set to fly out, I realised I had to find a way to take her with me.

That meant I had to get to grips with the animal moving industry in Australia and quarantine laws of Thailand…and fast. The first step was immunisation, that was easy and relatively inexpensive at under $100. But there was a catch in my case…Honey was overdue for her vaccination which meant she couldn’t accompany the rest of the family to Thailand and would have to stay at a cattery for two weeks until her vaccination period had cleared.

That meant the next challenge was to find a pet travel agency that we were happy with. I called quite a few before settling on one that was owned by a vet and also had a cattery where Honey could stay until she was deemed fit to fly to Thailand.

Their website was filled with very useful information which impressed me. Also, I loved their Facebook page. They would take a picture of the animal in their little travel crate just before it was about to board. I liked that because then pet owners from all over the world would post a picture of their pet arriving, as a thank you on the page. There were lots of happy customers.

This pet travel agency also took all the worry out of the trip. They organised the aeroplane-approved travel crate and last-minute veterinary travel certificates.

There was only one spanner in the works for me. Because Honey was not travelling with me, this caused some issues for the Thai authorities who asked me to apply for an importation certificate from the Chiang Mai Animal Quarantine Station. The animal travel agency was not able to do this step of the process. Fortunately, this certificate was scanned and sent to me and didn’t cost any money.

It was pretty exciting when it came time to collect Honey from Chiang Mai airport. All that remained was to pay for her to enter Thailand. Strangely, this tax is based on how much the pet is worth and is calculated at 30% of the original price of the pet. I explained that Honey was a street cat, so cost me nothing. In the end, they decided to estimate her value and charged me $103.

There were other expenses that I didn’t really understand, as the staff had little English. Charges that I did understand included an ‘after hours’ fee as she arrived in late, storage fees and cargo permit fees. I didn’t care—after handing over $255—I had my cat and could finally take her home.

As Honey had always been an inside/outside cat, she needed a few more vaccinations from the vet in Thailand. These were given to her over a period of three months, which meant that it wasn’t safe for her to venture out into her new yard until her vaccinations had been in her system for many weeks. Each vaccination required boosters and cost under $4.

All up, it cost $2,459 to bring Honey with us to Thailand and I don’t regret it one bit. It’s very comforting to have her by our sides and on our laps. And she brings a touch of our old lives to our new life in Chiang Mai, which is very sweet.