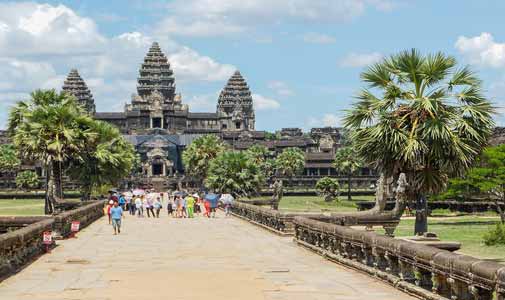 Tourism in Cambodia has been booming for the past 20 years with many travellers making the trip specifically to experience the majestic temples of Angkor Wat. As one of the wonders of the ancient world and the largest religious monument on the planet the temples alone are reason enough to visit. But Cambodia is also known as the Kingdom of Wonder because of its rich tapestry of historic landmarks, iconic statues, colonial architecture and jaw dropping picturesque landscapes. So, once you’ve visited Angkor Wat, try to check out these five top “must-see” sights in Cambodia as well:

There is a truly unique shopping destination in Cambodia that is both an awesome landmark and an outstanding retail cornucopia: Phnom Penh’s Central Market.

Built by French architects in the 1930’s, it’s an Art Deco masterpiece made up of four large halls filled with every type of market stall and covered by a vast domed roof with a bright yellow exterior that catches the eye of every passerby. Eighty years after it first opened its doors to shoppers Central Market continues to attract a steady stream of locals, expats and tourists who flock to its hundreds of stalls each day.

There really is something here for everybody, whether you are in the market for souvenirs, brand name clothing, fresh flowers, food, electronics, handcrafted pure gold necklaces or fine jewellery dripping with emeralds and jade. You might spend $1 or you might spend $1,000 but every visitor gets to take home a fantastic shopping experience for free.

Wat Phnom is literally the centre of Phnom Penh as the city actually developed directly around this most curious place of worship and cultural landmark that sits atop a man-made hill.

The temple is a very important religious site that is surrounded by a park at the bottom of the hill where all manner of festivities take place, especially during Khmer New Year.

A much-loved elephant called Sambo used to give rides around the temple grounds until her retirement a few years ago. She was cause for many a hilarious photo opportunity as she took both tourists and drivers by surprise during her daily commute down the middle of the main road to the temple.

However, with more traffic and newly paved roads unsuitable for elephants it was decided not to replace Sambo for compassionate reasons. But Wat Phnom is not free of wildlife due to the ‘gangster monkeys’ who made the area home. Despite efforts to rehouse them, the macaques have an uncanny ability to find their way home. While they make for bizarre photos it is advised to keep a tight grip on your belongings as the little gangsters will pilfer anything left unattended.

Located directly next door to the Royal Palace in Phnom Penh, the National Museum is Cambodia’s foremost institution for the preservation of the country’s art, sculptures and objects with over 14,000 items in their collection. The traditional sandstone building itself is an excellent example of Khmer architecture that was first opened in the 1920’s during the French colonial era and has remained consistently popular with history buffs, tourists and photographers alike.

In Sihanoukville there is one landmark which is impossible to miss due to its location between Sokha and Ochheuteal beaches as well as its visual prominence. The Golden Lions Monument is a traffic circle (or roundabout) that stands out thanks to the presence of quite large golden statues of two lions.

They were built in the mid 1990’s in recognition of the King of Cambodia, after whom the city was named, hence the symbolic use of golden lions to represent the Royal connection. Perfect for a selfie or group photo by visiting tourists the monument is also a local hangout and meeting up point due to being so easy to locate.

If you are visiting the temples of Angkor Wat in Siem Reap then you have the option of staying at one of the city’s most historic hotels. Opened in 1932 the Raffles Grand Hotel d’Angkor has stayed true to its original charm following a long period of restoration to its former glories. Everything remains faithful to the period with beautiful interiors and doormen perfectly dressed in traditional uniforms who bring you to your room by way of an original working cage elevator in the lobby area.

It’s almost as if you are stepping back in time surrounded by the hotel’s rich history and grandeur. Equally impressive is the huge swimming pool in the grounds of the hotel which is the biggest pool in the country. After a morning exploring the magnificent temples there is no better way to cool off and reflect on your Cambodian adventure than going for a dip in the pool then ordering a signature cocktail at the hotel’s iconic Elephant Bar.