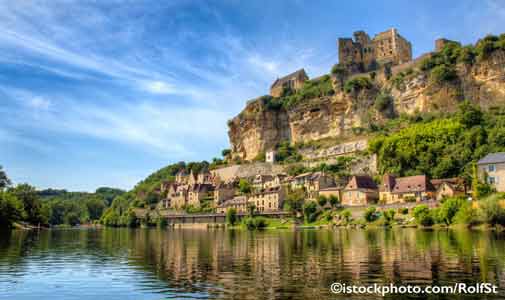 Five years ago, I finished a job with an Australian television network and, a few months off 65, stood little or no chance of finding another job.

My wife Lorraine and I had been considering an overseas move for some time. We knew that wherever we went we wanted to take our dog, Scooter. Looking to Europe, we checked out Ireland, Spain and Portugal, but we kept coming back to France. It fulfilled our desire to immerse ourselves in history and a different culture. We were looking at the southwest corner, which we considered to have a good climate, pleasant countryside and affordable housing.

We booked a flight to England, where we have relatives. Landing at Heathrow, we picked up Scooter, who had been on the same flight. Over the next couple of weeks, we bought an SUV and a caravan and headed across the channel to France.

We did it this way because we thought it would be easier to buy a vehicle in the U.K. where we knew the language; although in hindsight, we could have managed in France.

We headed south into the Charente-Maritime, then went farther south, looking at houses backed by the snow-capped Pyrenees, then worked our way back up through central France, through the Lot, Perigord and Dordogne.

We saw lots of great houses, great towns and great countryside—but still did not find our dream home.

We were looking for a rural property with character, private but not isolated and immediately liveable.

Although we were happy to do cosmetic work, we wanted to avoid the pitfalls others had made by buying spectacular houses which required tens of thousands of dollars to renovate.

We eventually found a place through an agent in the small Haute Vienne town of Bellac in Limousin. While it was not rural, it had two acres of gardens and a view across the local river valley to the scenic Monts de Blond in the distance.

With three floors, eight or nine bedrooms, a spectacular staircase, plenty of outbuildings and fruit trees. A supermarket and other shops were a short walk away. There was a boulangerie to cycle to for the morning baguette, a railway station with connections to the world and Limoges international airport a 40-minute drive away.

As we learned some French and became part of the local community, we realised that France has a much lower cost of living than Australia and the best healthcare system in the world.

We spent three magical years in the house but sold up a few months back as we wanted to explore more of what Europe has to offer. We spent two months on a road trip through Spain and Portugal and are currently
house-sitting in a five-bedroom home on five acres between Toulouse and the popular tourist destination of Carcassonne.

The owners have had to return to the U.K. for work and have the place on the market, so we could be here until they sell. We’re committed for six months, which will give us time to check out the amazing history southern France has to offer. We have also seen some incredible bargain property in the stunning Languedoc region and may eventually buy here.

Just the other day the 16th stage of the Tour de France whizzed by, just 700 metres from our gate, and as we drive to nearby historic towns to do our shopping, we can see the Pyrenees to the south. We’re just a few hours’ drive from Spain and three hours from the ski slopes of Andorra. Avignon, Arles and the beauty of Provence are all within easy reach.

Travelling around, checking out the local cuisine, finding dog-friendly places and looking for unique destinations off the tourist track are the simple pleasures of daily life here and we feel lucky to have the opportunity to savour them all…

A Day in The Life of an Expat

Retiring in Europe: The Pros and Cons

The Best Towns in The South of France for Expat Living