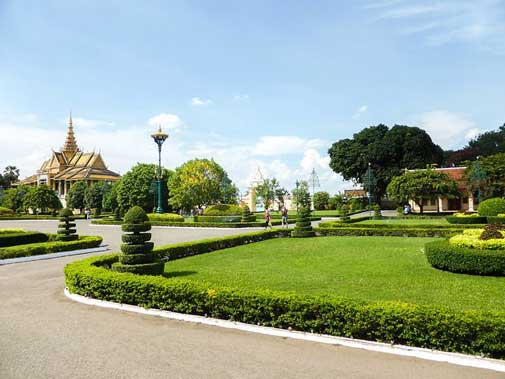 Expats living in exotic destinations like Cambodia’s capital Phnom Penh enjoy when our family and friends visit as we get the chance to show them exactly why we love our adopted homeland so much.

In the decade since I moved here, I’ve perfected my role as a tour guide with an itinerary of the best sights to visit, cool places to explore and favourite haunts that I want my guests to see. If they’re only staying for a day or two then I have an essential list of things for us to do.

If you’re planning on visiting Phnom Penh then I’d like to share with you my top five recommendations:

1. Tour the Royal Palace and See The King of Cambodia

Cambodia is known for its ancient culture and heritage and a visit to the Royal Palace is a great way to experience this. It’s one of the most popular tourist attractions and is open twice a day at 7.30 a.m. and 2 p.m. for a very reasonable $12 entry fee. Not only do you get to see the majestic sights and historical buildings inside the palace but it’s not uncommon for visitors to get a glimpse of His Majesty King Sihamoni.

The residence of the highly respected King of Cambodia is cordoned off from the area of the palace open to the public, however, on occasion the King has been seen graciously smiling and returning the waves of astounded tourists.

One of the most sacred temples is Wat Phnom which is a Buddhist temple that sits atop a small hill.
Constructed by Lady Penh in 1372 it was so popular with worshippers that it became the centre of the city which developed around it and was Phnom Penh named in her honour.

For around $1 visitors can walk up the grassy hill to the temple which is surrounded by statues and shrines where Cambodians bring flowers, food, candles and burn incense as they pray to the gods as a sign of respect and for good luck.

As the only hill in Phnom Penh it offers great views of the city and excellent photo opportunities. But I would be remiss not to mention the “Gangster Monkeys” that live in the nearby trees and have a habit of snatching your coconut or soft drinks if you turn your back for a second. Their antics make for much amusement among tourists and Cambodians alike. Local officials have been less amused but despite declaring war on the “Gangster Monkeys” a few years ago, the little blighters have made it clear they aren’t going anywhere.

After soaking up the cultural sights it’s normally a good time to experience the taste of Cambodia’s national cuisine and the best place in town is Malis restaurant. Located just south of Independence Monument, their dedication to using the finest local ingredients and offering an authentic menu filled with provincial specialties means it’s best to book in advance.

The Fish Amok is a delight as is the Kampot Crab Fried Rice and Takeo Sausage. Not only is the food mouthwateringly delicious but the restaurant has a uniquely traditional, yet modern, ambiance. Stylish decor and modern art are complimented by Buddhist statues and an outdoor dining area overflowing with lush plants and surrounds a beautiful pond filled with ornamental fish. But don’t just take my word for it. Malis has received ringing endorsements from celebrity chefs including Anthony Bourdain and Gordon Ramsey. Jackie Chan is a big fan of the restaurant’s master chef Mr. Luu Meng who has himself become a celebrity having been featured by the likes of CNN and The Wall Street Journal.

If you already had great Khmer food for lunch, then you might want to try something a bit different for dinner. If you were ever curious about North Korean food or were interested in seeing a North Korean music extravaganza, then you’re in luck. Phnom Penh is home to Pyongyang Restaurant which is the most bizarrely fascinating dining concept in the city and one of the few opportunities for westerners to interact with North Koreans.

Staffed by impeccably polite waitresses the menu is packed with delicacies such as Pyongyang Cold Noodles, Kimchi and all manner of grilled meats. But the real treat is when they take to the stage at 8 p.m. for an unforgettable musical performance. Familiar tunes by the Beatles or the Carpenters fill the room but are accompanied with patriotic lyrics sung in Korean instead. One waitress plays guitar, another plays bass, one sings beautifully while the drummer doesn’t just keep the beat, she totally rocks the show. I’ve seen some of the world’s biggest rock bands but I have never been so impressed by a drummer in my life. The applause is deafening.

After the show the waitresses clear away the dishes and happily answer questions about North Korea…as long as you are respectful. It is the type of Phnom Penh experience that you’ll never forget.

5. Try Your Luck & Live It Up at Phnom Penh’s Only Casino

Once you’ve experienced the culture and cuisine of Cambodia and watched a North Korean pop concert what’s next?

Well, if you like a flutter, are a people-watcher or just fancy a late night drink then NagaWorld Hotel and Entertainment Complex is an interesting way to end the night. It holds the exclusive casino license for Phnom Penh and is a massive 13-storey building near to the riverside. You can try your luck on one of the many tables if you’re into Roulette, Baccarat or Blackjack or hit the pokies.

I’m not a gambler so prefer to window shop for the various $50,000 Rolexes in Naga’s retail outlets then go to one of their 14 different restaurants and bars for a drink or two. Then I usually take my guests for a walk around the huge gaming floor so we can check out the action (while avoiding losing any of our money!).

After exploring the insanely opulent marble decor, golden statues and random Christmas trees, it’s time for a final drink at one of Naga’s two nightclubs before I send everyone back home safe, sound…and somewhat stunned at the amazing diversity that Phnom Penh excels in.

Get Your Free Cambodia Report Here