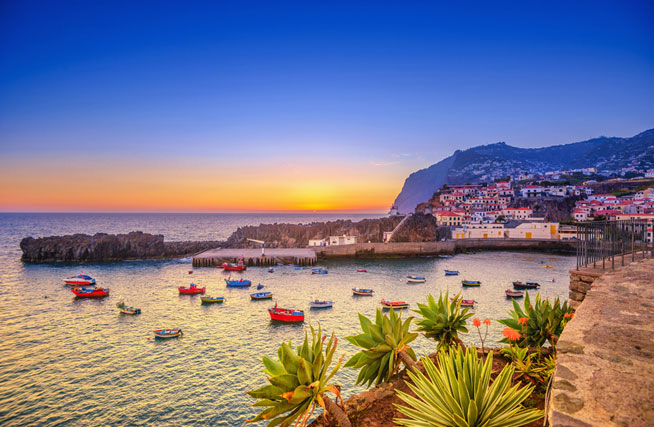 Little villages of colourful houses sit among the rocky, green hills of the island. Small farms, which grow fresh fruits and vegetables for the locals, spread out from the top of the hills on down to the sea shore creating a natural patchwork effect.

This is Madeira…a mountainous island located in the Atlantic Ocean off the northwest coast of Africa. This autonomous region of Portugal, an archipelago comprising four islands, is home to around 260,000 people who live on the two inhabited islands of Madeira and Porto Santo.

The Madeira archipelago has become popular with expats from across the globe…and they aren’t the only ones who have succumbed to Madeira’s charm. Throughout history, illustrious visitors have lived and holidayed on these islands. Winston Churchill, Empress Elisabeth of Austria and Margaret Thatcher to name just a few. Charles I of Austria, the last ruler of the Austro-Hungarian Empire, loved his time here so much that he asked to be buried here.

Home to almost half of the archipelago’s population, is the capital city of Funchal, which is where I rent a one-bedroom apartment, with Atlantic Ocean views, for $515 a month. Rents like this are not unusual in Madeira…you can easily find apartments, generally fully furnished, from $590.

Madeira has a temperate climate which means warm and pleasant weather. Temperatures in the summer can hit around 29 C, but it’s comfortable heat. In winter the rain comes and the temperature drops to a manageable 12 C, but most days are crisp, clear and sunny. Locals say that it’s possible to experience the four seasons in one day at different points around the island: Funchal is mostly sunny all year, the north coast has more cloud and rain (very occasionally snow falls in the mountains), while the middle and southwest of the island have more sun and cooler temperatures. So there’s something to suit every taste.

Madeira is easy to get around with an excellent road network which connects all parts of the island through main roads and tunnels. While most of the locals drive, the public bus service connects all the villages on the entire island. When locals from Madeira want to visit its sister island of Porto Santo, they catch “Lobo Marinho,” a comfortable ferry that makes daily connections between the two islands.

Although this is a small island, there is still plenty to keep you busy. Thrill seekers will love the options for canyoning, paragliding, mountain biking and hiking. For something less strenuous, dolphin and whale watching off the coast has become a popular activity in recent years. If the great outdoors isn’t your scene, the latest movies are shown in Funchal, small local festivals of art and music offer some culture, and there are plenty of coffee shops for relaxing with a coffee and a slice of bolo de mel (a traditional honey cake).

And the local Madeirenses, well, they are the jewel in this crown, the most likeable people in the world; always friendly, always helpful and always ready to stop for a chat.