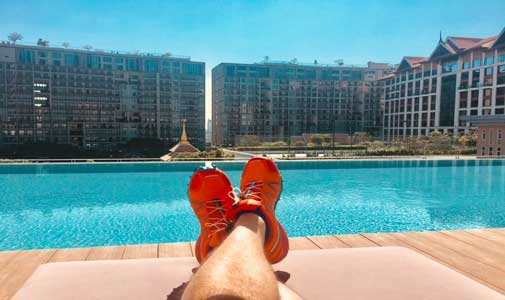 It’s been almost a year since Dean Kaufman retired to Chiang Mai and taking the time to visit and revisit in the run-up to his move definitely paid off.

“I had previously visited Thailand but Chiang Mai was vastly different to the rest of the country. It made a strong impact on me,” says Dean, 47. “The number one thing that drew me to Chiang Mai is the people. They’re so kind, happy, thoughtful and caring and they live a balanced life.

“Compared to where I’ve been living for the past 20-plus years, there’s far less stress, less crime, less focus on consumerism and status and it’s easier to make new friends, especially with expats.

“You automatically have things in common with an expat in Chiang Mai, such as an appreciation of Thailand, a willingness to travel and enjoyment of a simple life.”

Dean began his overseas adventures age 25, when he left Australia and ventured to the U.S., where he landed a job on a cruise ship. He spent the last 14 years working in real estate.

“I was living and working in the U.S. but began exploring the idea of moving to Chiang Mai,” he says. “I had originally planned to retire in Australia at age 65 but choosing to retire in Thailand allowed me to retire much younger and enjoy my freedom for a longer period.

“I love exploring the towns and mountains surrounding Chiang Mai. I thoroughly enjoy exploring and discovering new places and in this area a motorbike is the perfect vehicle,” he says.

“I’ve already found many great rides, have shared them with friends and just started a blog to make them accessible to others that enjoy exploring on two wheels.”

So, what does it cost Dean to live in Chiang Mai?

His monthly budget is approximately $2,700, excluding plane travel to other parts of Thailand or overseas. Dean says he probably spends a bit more than the average retiree, but researched extensively before moving to ensure there were no surprises.

“I live in a luxury one-bedroom apartment that I rent by the year,” he says. “It costs $1,300 per month, but this is one of the most expensive condo buildings in Chiang Mai. That price includes all furniture, down to the cutlery, fast WiFi and use of the gym and swimming pool.

“The low cost of living compared to the West means that I focus less on price. Sometimes a meal or small purchase will be underway in Thailand before the price is discussed because you know it’s going to be reasonable.

“At restaurants, I typically spend around $6 on lunch and about $8 on dinner. Sometimes I’ll spend half that if I’m eating at a simple Thai restaurant.”

Dean has some advice for other Australians thinking of living or retiring in Chiang Mai: try before you buy.

“If they haven’t visited Chiang Mai, they should book their ticket today and get over here ASAP,” he says.

“Chiang Mai offers a healthy, safe, affordable and fun place to live. I’ve met countless people who, like me, visited here on a holiday and eventually made the move.

“If they have been here before and are unsure about whether it’s ideal for retirement, I suggest they gradually transition by spending increasingly long holidays here.

“Airbnb offers the chance to live like a local, so spend weeks or months here in a house or apartment instead of a hotel to get a sense of life as a retiree.

“You’ll learn what it’s like to go shopping for groceries (the supermarkets are good), get a bank account (easy), pursue your hobbies (I play tennis and the local players are wonderful) and experience the various seasons.”

5 Things That May Surprise You About Chiang Mai, Thailand