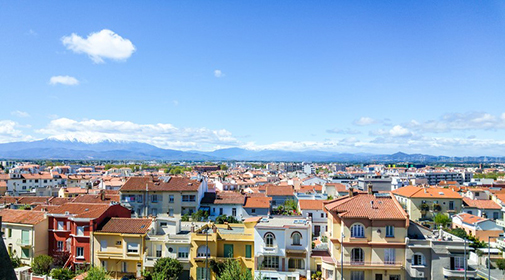 The artist Salvador Dali described Perpignan railway station as “the centre of the universe”, after experiencing what he called a vision of “cosmogonic ecstasy” while in the waiting room in 1963.

Having stood on the platform, I think he was wrong. In fact, it isn’t even the centre of Perpignan (though it’s only a 15-minute walk away).

You can make up your own mind. Dali was probably out of his.

Regardless, the city is astride the TGV (Train a Grande Vitesse—France’s high-speed trains) line between Paris and Barcelona and all places in between.

Perpignan is mainland France’s southernmost city and the perfect place to be if you can’t decide whether you want to live in France or Spain.

Wide Mediterranean beaches are only a few miles off to the east, the snow-capped Pyrenees lie to the west, with plenty of ski resorts only a two-hour drive away. Spain is just to the south. The Costa Brava is within a 90-minute drive and the chaotic joy of Barcelona less than two hours’ journey.

As both France and Spain are part of the Schengen free trade and movement area, the countries do not have a physical border, so don’t worry about going back and forth. It’s best to bring a passport for identification, but it’s unusual to be asked to produce it.

With a population of 300,000, Perpignan offers everything a retiree could want. Such as a fabulous location; a mild and pleasant Mediterranean climate; efficient transport; health and medical services; and, most importantly, affordable real estate.

There are no restrictions on foreign ownership in France and the French love haggling, so the price you pay will be lower than the asking price.

My eye was caught by a one-bedroom place in a 19th century building at Place Rigaud, right in the heart of the city. It has an open-plan living and dining room, a separate fitted kitchen, one bathroom and one bedroom with a built-in wardrobe. It’s a charming property with high ceilings, windows on three sides and a fireplace for cosy evenings in winter. It’s on the market for just $101,000.

As far as long-term rentals go, you can find a decent two-bedroom apartment for as little as $622 a month. A comfortable two-bedroom, one-bathroom apartment can be yours for a slightly higher budget of around $830 to $970 a month. Most apartments come unfurnished, so you need to take this into account when renting.

Australian citizens can live in France for up to 90 days each year without a visa. If you want to stay longer, you need to apply for a residence visa at least three months before you leave Australia.

If you plan to move for a significant length of time, you can enter the French health system after three months. This entitles you to a reimbursement of doctors’ charges and pharmacy medicines. A visit to a general practitioner will cost you $40; you then get 70% of that cost back, so it is very affordable. Perpignan has a large hospital with terrific emergency facilities, so if you have an accident, you’ll be well looked after.

Even if you are only visiting Perpignan, make sure you do what expats who live in the area do and visit Collioure. About a half-hour’s drive to the south, Collioure is a picture-postcard seaside village, with narrow streets packed with restaurants.

I spent hours walking around the old royal castle of the Kingdom of Majorca and the remarkable waterfront church of Notre-Dame-des-Anges, which has a one-of-a-kind lighthouse bell-tower and ornate altar.

If history and churches aren’t your thing, Perpignan offers everything for the modern city dweller, including theatres, cinemas and nightclubs. The city also has sports facilities, including gymnasiums, tennis courts, several golf courses and two Olympic-size swimming pools.

Soccer is fairly popular in the area, but the big draw is Rugby Union and Perpignan fields a world-class team. It is also home to the Catalan Dragons Rugby League team. Both clubs attract expats from Australia and New Zealand, which means that there are plenty of people around who speak English.

Perpignan has a small airport with flights around Europe. But if you are very cost conscious, flights out of Barcelona are often cheaper, more frequent and have some very useful direct connections with Aussie cities.