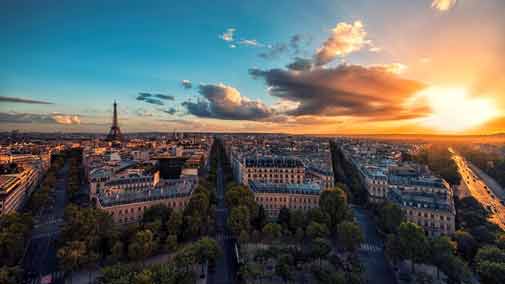 Last year in Paris I persuaded a friend to join me on a trip across town to the Belleville district. He was hungover after a long night on White Russians in the city’s excellent jazz clubs.

I told him we were on a mission.

Before finding a decent bistro we would seek a street called Rue Ramponeau. It was here in 1871 that the last communard coolly tossed away his rifle and abandoned his barricade to advancing government troops.

I wanted to see the spot.

The Paris Commune was a trauma for France. In March 1871 left-wing communards took control of the city. In May the government took it back with a massacre. Go to the Père Lachaise cemetery and you’ll still see the bullet holes in the old tombs and along the wall where surrendering communards where executed.

I enjoy tactile history…the kind you can touch and see. Walking down the street in the Prenzlauer Berg district of Berlin I remember thinking the pavements were oddly decorated until I realised it was the scars of World War II shrapnel. In Ireland you’ll find a megalithic tomb or a castle in every county. Climb the steps of a pyramid in Mexico that once a Mayan priest used…stand on the battlefields of Gallipoli or under the walls of Homeric Troy…

So here we were, my friend and I, on a narrow, cobbled but otherwise non-descript street in Paris with nothing much to see and my friend complaining about the walk up hill.

I tried to enthuse him. “Imagine! From down there the blue-uniformed troops of General Montaudon…up here a lone man coolly fires on them. Who was he? When he casually walked away what happened to him…”

My friend humoured me but soon replied, “Let’s eat.”

Eating in Paris is an incredible pleasure. It doesn’t have to cost you much either. IL France Correspondent, Barbara Diggs lives in Paris and I use her recommendations all the time.

“Try Chartier, a Parisian classic dating back to 1896,” she says. “Chartier has an enormous yet elegant 19th-century dining room and prices that keep it bustling. The soup of the day or a salad of grated carrots with vinaigrette dressing costs just over $1, with other appetisers averaging about $5 or $6. Main courses, including trout with almonds or the restaurant’s legendary roasted chicken, run about $11 to $15. Afterward, you can savour desserts such as Dame Blanche meringuée or Peach Melba for about $6.

“Another low-priced gem is La Cordonnerie, a tiny but charming traditional French restaurant where Hugo, the chef, cheerfully prepares mouth-watering dishes like chicken with foie gras before your eyes in an open kitchen. A two-course dinner costs $25 to $30 per person,” says Barbara.

Paris has been through tough times. There was the 845 AD sack of the city by Ragnar and his Vikings. The Black Death killed 800 Parisians a day at its worst. Plenty more wars and plagues…

But the City of Light prevails.

I’m heading back there for a flying visit. I think I’ll visit the catacombs. I want to test out a tip I got for skipping the long queues. (Book the “Skip the Line Catacombs” tour.) If it works well, I’ll let you know.

I will definitely head to the Musee du Quai Branly, a cool museum of indigenous art from around the world. It’s close to the Eiffel Tower.

I have my eye on good live music in the Duc de Lombards and Sunset Sunside. Though I also really enjoy Caveau de la Huchette, a jazz club in what was an execution chamber during the French Revolution.

Of course, one of the best things about Paris is that simply strolling along the cobblestone banks of the Seine or the tree-lined paths of the Canal St. Martin can feel like a wonderful extravagance, even though it’s absolutely free.

As Barbara says: “There are dozens of other ways to enjoy Paris without spending a cent.”

Many major sites are free, including the Jardin du Luxembourg, Notre-Dame Cathedral and the Basilica of Sacré Coeur. It also costs nothing to pay your respects to great talents such as Molière, Chopin, Jimi Hendrix, Jim Morrison, Gertrude Stein and Oscar Wilde at the Père Lachaise cemetery.

“Take note also that on the first Sunday of each month all museums in Paris are free,” says Barbara. “About 22 museums, including the celebrated Musée Carnavalet (a Paris history museum), Maison Victor Hugo and Musée de la Vie Romantique, are free year-round.

“Also, if you are a museum lover, you can save money by buying a “Paris Museum Pass”. A two-day, four-day or six-day pass will allow you unlimited access to 60 museums and monuments in Paris, including the Louvre, Musée d’Orsay, Versailles and the Arc de Triomphe. Prices start from $72, which means that by the time you’ve visited three museums or monuments, you’ll have already recouped your investment.”

Sign up here for IL Australia’s e-letter and we’ll send you five free postcard e-letters weekly. We’ll also send you a FREE research report on A Taste of France: All the Ingredients for the Good Life.

Getting a Taste for the Simple Life in France

My Favourite Way to Spend a Day in Paris