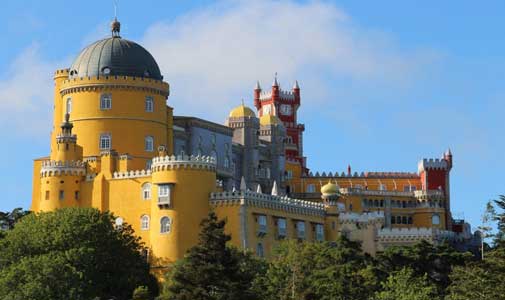 Castles, palaces, fortresses and elaborate gardens are dotted throughout all of Portugal, but one town is a virtual cornucopia of them. Architecturally fascinating, culturally rich, it’s a magical place for history buffs, foodies, shopaholics and romantics. It was such a favourite of Lord Byron that he immortalised it in his epic poem, “Childe Harold’s Pilgrimage”.

Sintra is located northwest of Lisbon, perched on a sometimes mist-covered hilltop surrounded by a pine tree-filled national forest. Parking can be tricky, which makes booking a day tour by bus from Lisbon appealing. Or take the train from Lisbon’s Rossio station; you can be in Sintra in 45 minutes for a mere $3.60. You can view the timetable . 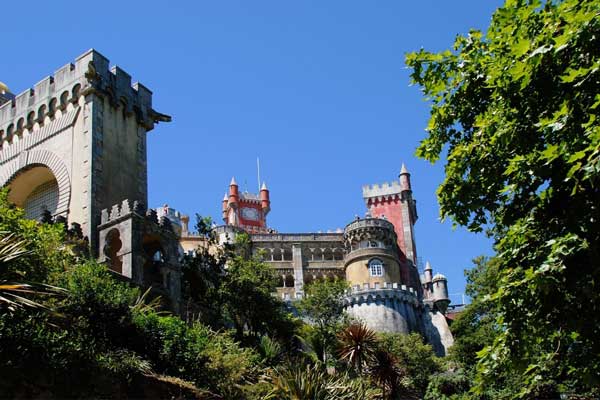 A glorious example of 19th-century Romanesque Revival architecture, the is recognisable for miles due to its location on one of the highest points in Sintra and its vivid colours. The UNESCO World Heritage Site is the creation of King Ferdinand II. Viennese by birth, king by virtue of his marriage to Maria II of Portugal, he didn’t leave his ancestry behind in designing the palace; it’s an ideal setting for a Grimm fairy tale.

Explore the palace’s lovely park, with walking paths, hiking trails, moss-covered rocks and meandering streams. Visit the farm and stables, where you can arrange for horse, pony or carriage rides.

A note on visiting hours and ticket prices: closing times are generally earlier in winter, so please check with the park when visiting. Costs vary. For instance, the Capuchin Monastery is half the price of Pena Palace. In general, children and senior prices are one to two dollars less than full adult ticket prices. If you plan on seeing many places, check out discount passes .

Tour the National Palace of Sintra

The has its origins in the eighth century at the beginning of the Moorish occupation. Its look today, however, is the result of extensive building during the 15th and early 16th centuries. In fact, it’s the best-preserved medieval royal residence in all of Portugal, inhabited almost continuously from the early 15th through to the late 19th centuries. Stroll the interior courtyards and hear legends of the past, like the intriguing story of how the Magpie Room received its name.

Note: If you’re thinking about spending more than a day in town, walk three minutes from the palace to the ideally located four-star and check availability.  A room with free WiFi and breakfast for two starts at $190.

Climb the Ramparts of the Moorish Castle

During the eighth and ninth centuries, the Moors built a fortification in Sintra. It was surrendered to Christian forces in 1147, and over the centuries was remodelled and expanded. Today, it offers tourists panoramic views of Sintra. On a clear day, you can see Mafra, site of another major national palace.

Peek Into a Royal Hideaway

is an exotic villa dating from 1858. A former summer resort of the Portuguese court, the mansion exhibits Anglo-Saxon, Moorish and Indian influences. Another UNESCO World Heritage Site, the palace is remarkable for its eclectic gardens, featuring plant species from five continents as well as lakes and waterfalls.

Plumb the Depths of Mystery at Quinta da Regaleira 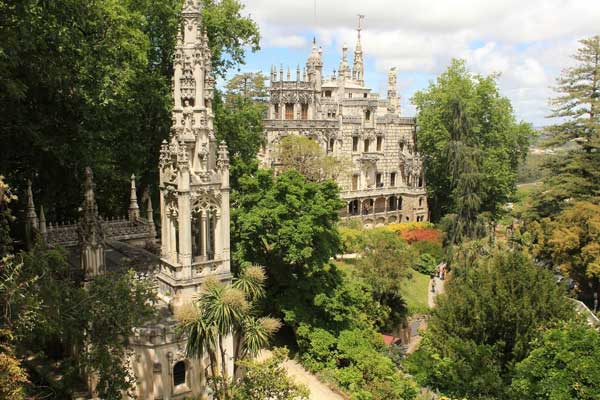 The Regaleira family were wealthy merchants from Porto, who, in 1892, sold the almost four hectares (10 acres) of property where the quinta (estate) now exists to Carvalho Monteiro. The architecture reflects Roman, Gothic, Renaissance and Manueline styles, while the décor showcases Monteiro’s predilections for alchemy, masonry, the Knights Templar and the Rosicrucian. Of special note are the extensive gardens, an underground lake, secret passageways and an inverted tower, known as the “initiation well”.

Take a Trip to the Cork Monastery

One attraction many visitors overlook, but well worth the time, is the . Known as “the cork monastery” (its only decoration), it’s set amid pine trees and boulders, isolated and austere, with living quarters and kitchens connected by narrow stone passages. A fascinating look at the life of Franciscan monks who made it their home, so close to – and in contrast to – the opulent way of royalty in nearby palaces.

Another less well-known attraction is the . After the death of his wife Dona Maria II, King Fernando II married the Countess of Edla. Unlike the imposing Pena Palace, this time he built a charming and romantic two-storey Alpine chalet, a fashionable trend in late 19th-century Europe. Features include stone walls designed to look like wood, murals, glazed tiles, and extensive use of cork on bays, eaves and balconies. The setting includes lakes and a garden, featuring both local vegetation and species from around the world.

Pastelaria Gregório is one of Sintra’s oldest pastry shops. Try a queijada (like a small cheesecake) or one of their famous honey cakes.

For a quick bite between castle visits, skip the tourist restaurants and stop into a local bar. Located on a side street near the tourist office, Bar Estrada Velha is inexpensive and cosy, with a few tables for outside seating. We like the ham and cheese crêpes, served with a side salad of tomato, lettuce and fresh onions.

One of our favourite dinner spots is family-owned Cantinho de São Pedro . One of the oldest restaurants in Sintra, it offers not only Portuguese cuisine, but items like moussaka ($14) and cannelloni ($12). Top off your dinner with profiteroles ($5.50). 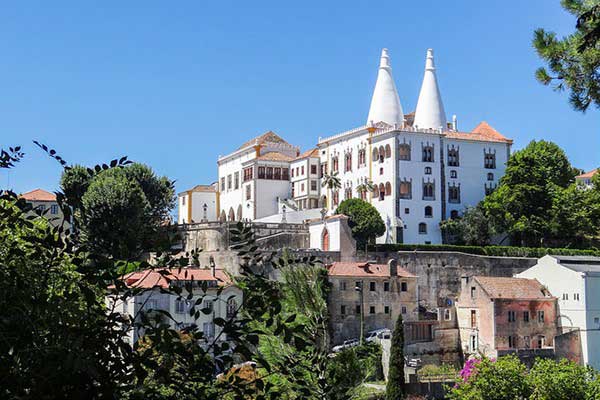 In addition to Sintra Boutique Hotel mentioned above:

Dating from 1764, this is the oldest hotel on the Iberian Peninsula. A six-minute walk to the National Palace and eight minutes to Quinta da Regaleira. Around $280 per night.

Charming venue close to the train station. A 15-minute walk to Old Town. From $120.

Finally, before you leave Sintra, head to the Sabuga Fountain on Rua Marechal Saldanha. Legend has it that drinking from it will ensure your return someday.

The Best Beaches in Portugal