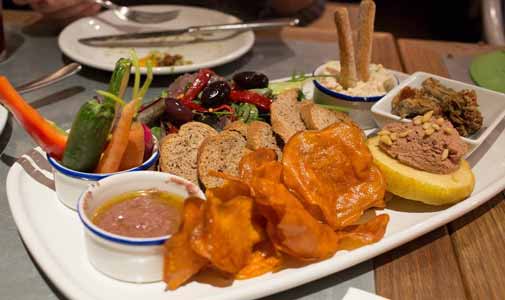 One of the reasons why Spain is so high up on my list of possible retirement destinations is the food. Although perhaps not as famous as French cuisine, the Spanish have a very rich and delicious food culture.

The Spanish eat their main meal at lunchtime and tend to have rather long lunch breaks, sometimes followed by a siesta. Shops close from around 2 p.m. to 5 p.m. to allow for this extended meal and then stay open until around 8 p.m., although sadly things are slowly changing as businesses want to get more in sync with the rest of the world.

Many Spaniards will eat their main meal of the day at a local restaurant, where there are set menus called a menu del dia (menu of the day), which include a first and second course, a dessert, wine and coffee. These are really affordable places to eat and if they are full of locals, you can be sure the food will be excellent. The menus are often quite simple and the description on the blackboard outside often consists of just one or two words for each dish. But the actual dishes are always cooked with creativity and passion.

Here’s an example of a typical menu that you’d see on a blackboard outside the local restaurants, with a translation of what you actually get:

Ensalada
Salad, usually crisp lettuce, huge red and green tomatoes, and olives. Always a bottle of olive oil and wine vinegar on the table to finish it off.

Arroz a la Cubana
Rice with tomato sauce and a fried egg on top.

Merluza
Hake, often in a sauce with peas.

Desserts are usually a simple ice cream, creme caramel or fruit. Occasionally you’d get musico, which means dried fruit and nuts. A strange name, which came from the days when itinerant musicians would be provided with plates of almonds and raisins to keep them going during their performances. In the old days, you used to get coffee included too, though these days it’s more common to get either dessert or coffee.

Sometimes, on a Friday, you might get paella as part of the menu del dia. The three-course menu is usually only available on weekdays, with restaurants offering more upmarket a la carte choices at the weekend.

What used to impress me most about these local Spanish restaurants was the incredible skill of the waiters. They were extremely well trained and could do 10 things at once, while carrying on a conversation and making coffee at the same time. The restaurants could be packed with people and only one or two waiters to serve everyone, but you never had to wait long and they were eternally cheerful. Most of the waiters were there for years on end. It was a long-term career for them, not just a holiday job, and they took enormous pride in their work. I never saw any of them write down my order, but they always got it right and after a few visits knew me by name.

In the evening is the time for a tapas crawl. Every town and city and most small villages in Spain will have a bar, with hams hanging from the ceiling and yellowed paintwork from centuries of cigarette smoke, all kinds of colourful bottles lined up behind the bar and a glass cabinet of delicious snacks along the counter. From the simplest of plates of almonds, cheese or jamon serrano (dry-cured Spanish ham), to fried octopus, tiny little anchovies or whitebait in oil, sardines, patatas bravas (fried potatoes in a spicy sauce) and tortilla (potato omelette), there is something to tempt everyone.

The style of the tapas will vary a little from region to region, and often include local sausages, salamis, cheeses, olives and other delicacies. In times past, tapas were given free when you bought a drink. When I travelled to Andalucia in the 1980s, you’d get a little plate of almonds when you bought a sherry in Jerez de la Frontera, but I think this has mostly died out now and you have to pay for your tapas. These days, a selection of tapas either in one bar or several during the night makes an excellent evening meal.

Catering for yourself is also an absolute joy in Spain, as there are so many incredible covered markets, with a colourful array of fabulous fruits and vegetables, hams, chorizo, fish, game, meat, dried fruits and nuts, herbs and spices. One of the most famous is La Boqueria in Barcelona, but there are similar markets all over Spain. There are large supermarkets, but it is still more common for the Spanish to get their fresh produce in the markets and small local groceries and it’s much more fun.

Last but not least, we shouldn’t forget the naughty but nice pastries, croissants, pan con chocolate (bread with chocolate), ensaimadas (coil-shaped pastries) and churros (fried doughnuts coated in sugar) that are served with the excellent coffee or hot chocolate for which the Spanish are deservedly well-known.

Definitely a strong incentive to go out for breakfast, even after a late night of crawling the tapas bars.