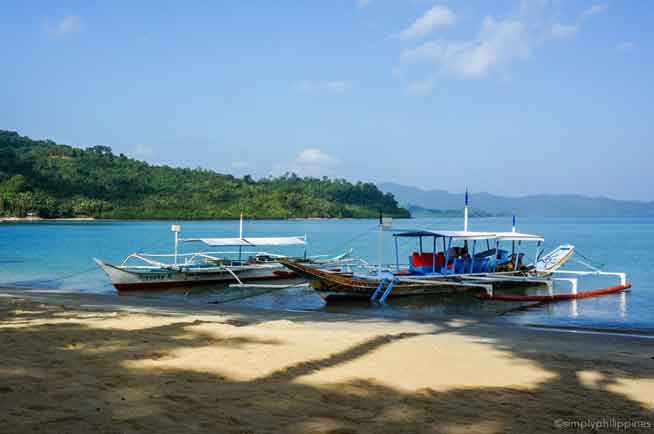 On the western side of Palawan island, halfway between the breathtakingly beautiful resort town of El Nido and the capital city of Puerto Princesa, lies Port Barton–a little beach town that always seems to be just waking up from a nap.

Palawan island is one of the largest in the Philippines and a $65 flight from Manila to Puerto Princesa takes around an hour and 20 minutes. From there, buy a $7 ticket and hop on a jeepney for the three-hour, mainly coastal, drive to Port Barton.

Wedged between jungle-covered hills and a calm, expansive bay, Port Barton will sneak up on you–the best places always do. It’s off-the-beaten track and, as yet, still relatively unknown to tourists. But word is getting out about this hidden gem, there’s eateries, sari-sari (convenience) stores, guesthouses and campsites—many of them owned by expats who came to visit and couldn’t bear to leave. You can make yourself at home here in a room in a beachfront resort for as little as $14 a night.

Mornings might be the best part of living in Port Barton. The sun rises behind the hills, lighting up the islands far on the horizon. The water kisses the sand and then shyly edges away. Fishermen sit smoking and boys walk the beach hawking a small catch from the night before.

There’s one gentleman who carries a basket heavy with fresh vegetables on his head. It’s the best kind of door-to-door. If you look interested, he’ll take it down and display his produce: gleaming purple eggplants, leafy bok choi, maybe a bunch of ripe bananas. But if you don’t feel like cooking you can enjoy a local breakfast of garlic rice, a fried egg and your choice of sausage, marinated fish or cured pork, served with pickled papaya, coffee and plantains, all for no more than $3.

All the while, bancas—outrigger boats native to the Philippines—of all sizes come and go, depositing families and travellers on the sand. You don’t live in Port Barton without taking boat rides and they’re the best. After all, this is Palawan—regularly voted one of the world’s most beautiful islands—foamy crags, secret bays, glimmered reefs and more virginal seascapes than you can shake a stick at—that’s Port Barton’s promise.

Mid-morning, sees small groups of day trippers head out for island-hopping and snorkelling. Couples pack water and crackers and kayak out to the sandbar or to German Island, home to a huge variety of fish and a few turtles. There are islands and beaches all around Port Barton that are worth exploring and, as it’s also home to a marine park, the snorkelling and diving here are first-rate.

Back on dry land, follow sandy tracks out of the village and they’ll lead to waterfalls and rice paddies and even a yoga studio up in the hills. One day I spent a full morning watching the breeze ripple and float the mosquito netting around my bed. Come noon, I ordered a juicy vegie burger and a salad with tomato, cucumber and basil fresh from the garden at the beachfront Barton Bistro. I washed this down with an icy pineapple juice. The total cost of this island lunch? $9.

Port Barton is all about lazy days, watching the pale blue mornings wake up the bay, lounging in hammocks and exploring the island beyond this sleepy village. And then of course, there were the sunsets: golden, glowing spectacles that demanded everyone come out on the sand with a cold drink in hand to watch.

After dark a few resorts flick on lanterns—electricity only runs in the evenings here—but the generator powers off by 10 p.m. and then Port Barton is lit only by the night sky. But then, sipping a drink in a swaying hammock on the shore under the moonlight doesn’t seem like the worst way to end the day…

Sign up here for IL Australia’s e-letter and we’ll send you five free postcard e-letters weekly. We’ll also send you a FREE research report on Live in Luxury in The Philippines.