The British discovered long ago the delights of Portugal, from the mellow taste of port wine in the north to the natural beauty of the southern region known as the Algarve. Over the years this area has also attracted Northern and Central Europeans seeking to escape cold climates. Now it’s gained momentum with travellers and expats from Australia, New Zealand, the United States, Canada and elsewhere.

From the craggy cliffs and expansive views afforded by Cape St. Vincent on the extreme west coast to Tavira—sometimes referred to as “Queen of the Algarve”, located 30 minutes from the Spanish border—the region is rich in every way. Superior beaches, ancient architecture, cuisine noted for fresh seafood—like the regional dish, cataplana—and excellent, inexpensive wines are luring many to explore the Algarve. In fact, in 2017, more than seven million tourists chose it as a destination.

The smallest administrative division on mainland Portugal, the Algarve is bordered by the Alentejo region on the north, the Atlantic Ocean on the west and south, and Spain on the east. It encompasses almost 5,000 square kilometres and has 451,000 permanent residents. The region is divided into 16 municipalities. (A note about terminology: designations can be confusing even for the Portuguese, so don’t worry about whether the names that follow are districts, cities, counties (concelhos) or towns. If you want to visit one or all of them, you’ll have no difficulty, as they are all well-known.)

Loulé, a traditional Portuguese market town, is the largest municipality with a population of 70,000. It’s followed by Faro (65,000), home to an international airport; Portimão (56,000), where you’ll find Praia de Rocha, a stunning beach backed by ochre-hued cliffs; and Albufeira (41,000), a former fishing village with a busy marina and active nightlife.

Smaller in population but not in desirability are Lagos (31,000), which also offers glorious beaches and lively bars and restaurants; Tavira (26,000), with a castle overlooking a seven-arched Roman bridge and no less than 37 churches; and Lagoa (23,000), home to the most productive winery in the Algarve.

Retire in the Algarve 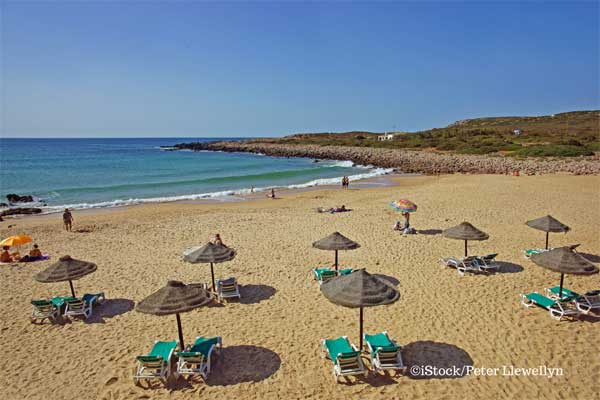 If you’re considering this region as a retirement location and to maintain an active lifestyle, you won’t be bored. Despite 161 kilometres of Atlantic shoreline, there’s plenty more to do than sunbathing. Golfing, tennis, boating, horseback riding, hiking and biking are just some of the opportunities.

Explore Albufeira’s Archaeological Museum, with artefacts from the Stone Age through the Roman and Moorish occupations to the 17th century. Take a river cruise from Portimão to Silves, the former Moorish capital of the Algarve, which is nestled in a hillside surrounded by lemon and orange groves. Stroll cobbled streets and climb the castle ramparts. While you’re up there, look for some of the town’s famous locals, the Great White Stork. Learn about Prince Henry the Navigator in Sagres, or the sardine canning industry in Portimão, or soak in the spa at Monchique.

Lifestyle in the Algarve 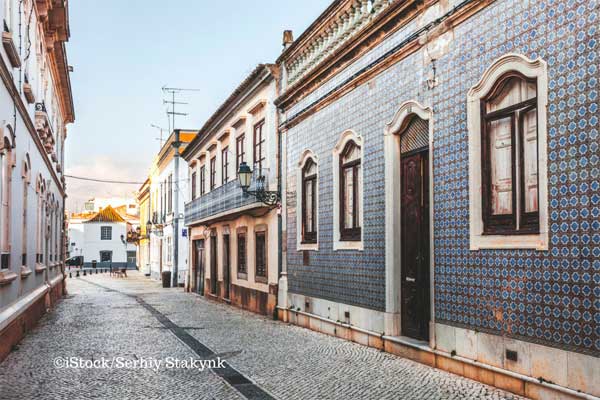 Two considerations in deciding on a new home overseas are undoubtedly climate and language.

The Algarve has lovely weather, enjoying about 3,000 sun hours per year. During hot, dry summers, daytime temperatures range around 31 C. Spring and autumn bring temperatures in the high teens C, while in the winter the mercury hovers around 15 C. It’s rainiest in winter; of the 50 wet days a year the Algarve experiences, most occur between November and February. 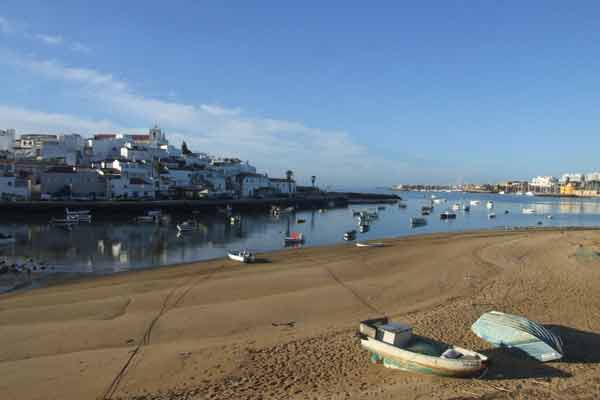 Despite the climate’s homogeneity, there tends to be a small difference in temperatures. In the west, Atlantic winds buffet towering cliffs and generally keep the air a few degrees cooler than in the east. The choice is yours: do you want a beach with dramatic geological formations, or would you rather stretch out on sandy spits in protected coves? The sheltered bay in Monte Gordo, close to the Spanish border, is said to have the warmest water in all the Algarve.

As far as language is concerned, generally you can get by in English. The key is “get by”. If you want to venture into the Algarve’s authentic, sparsely inhabited interior villages, and savour the true flavour of the country, learn at least the basics. Despite what you may have heard, Portuguese is not a difficult language to learn. It’s a welcome sign of respect to attempt to speak to locals in their native tongue. They’ll love you for it. And then they probably will want to practice their English.

Another consideration is your preferred surroundings. Perhaps a bustling tourist town offering many activities and English-speaking locals is appealing. (But beware the months of July and August when tourism peaks.)

Maybe you seek a quieter lifestyle. You can drive from west to east across the Algarve in less than two hours, and from north to south in about half an hour. So, it’s possible to enjoy an idyllic retreat and still have access to shops and restaurants.

Below are three suggestions representing a variety of what the Algarve has to offer.

This traditional fishing village—with lovely beaches, a small marina and friendly locals—has retained its charm despite great popularity with tourists and expats alike. Stroll the narrow streets filled with cafés and restaurants and go to the waterfront to take your pick of Portuguese, Italian, Indian or Chinese cuisine. Lagos is visible across the bay and it’s a quick cab ride to Portimão

To experience the essence of Portugal, centred on the sea and seafood, head 10 kilometres east of Faro to Olhão, Algarve’s largest port. Renowned for its importance in the canning industry developed in the late 19th century, today its lively waterfront fish market is still the town’s main attraction. Not unexpectedly, the old quarter is Moorish in character, with whitewashed houses and narrow cobbled streets.

Perhaps you want to dip your toe in the water, metaphorically speaking, in getting to know authentic Portugal. Consider Vilamoura. Originally conceived in the 1980s as a world-class golfing venue, Vilamoura offers elegant hotels, fine restaurants and a large marina in addition to the pristine Praia da Falésia beach. A day trip will take you to Loulé, where you can immerse yourself in local culture.

Cost of Living in the Algarve 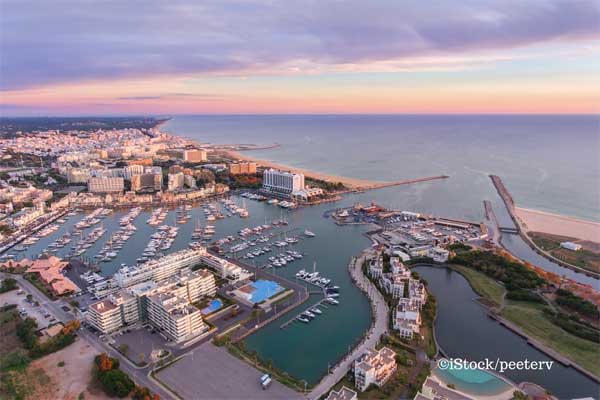 Since housing is the primary cost factor, one selling point here is that property prices are still reasonable, especially when compared to France, Italy, and even Spain.

Here’s the average purchase price per square metre in three of the prime areas referenced above.

The following are estimated monthly expenses for two: