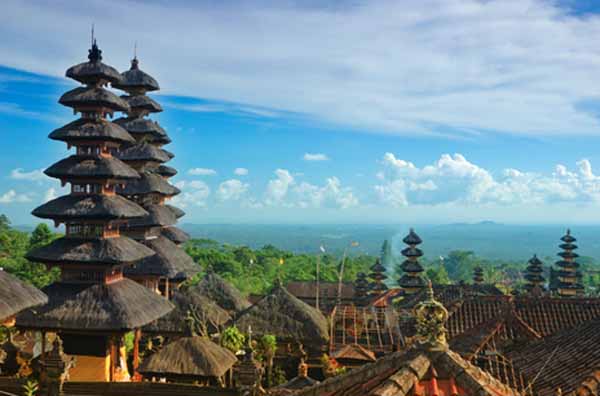 Historic temples dating back hundreds of years are spread all over the coastline and the central areas of Bali. Quite a few have become landmarks, they all feature centuries old-architecture and some are very revered by the Balinese people. It is said that there might well be over 10,000 temples and shrines scatted around the island.

Temple anniversaries occur twice a Gregorian year, as the Balinese follow a local 210-day calendar. It’s an amazing occasion to witness, the temples are dressed with colourful flags and Penjor, which are tall bamboo poles decorated brightly. On these days’ ceremonies take place to celebrate the occasion and the local Balinese visit each temple for most of the day. The music is loud and traditional dancing takes place along with the infamous cock fights.

Even on a normal day, these temples, Pura in Balinese, are amazing places to visit. The history which they hold and the cultural significance make them intriguing and mystical. Each temple you visit will be unique in its own way and they may either face the sea, the mountains or towards the sunrise.

Remember whenever you visit a temple, shoulders must be covered and a sarong and sash must be worn to show your respect.

The holiest of temples, Besakih Temple, is known as the “Mother Temple”. It is located around 900 metres up the slopes of Mount Agung in East Bali and climbing its steps you will feel as if you’re walking into the clouds. 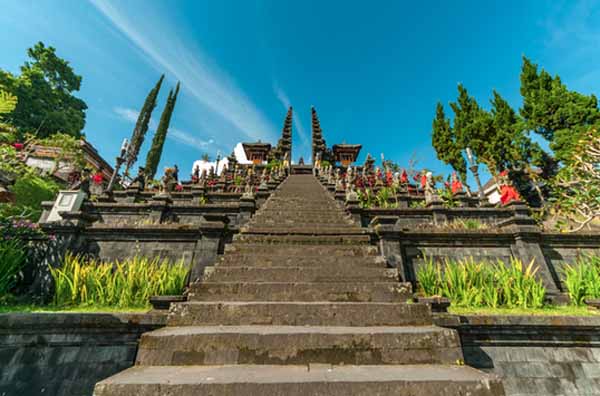 Dating back to the 10th century, the massive complex is actually comprised of 22 separate temples. The main axis of the temple aligns with the peak of Agung and it’s the site where many elaborate rituals and ceremonies take place.

Once inside, you can explore the different areas. The temple holds the lotus throne, where three seats are dedicated to Brahma, Shiva and Wisnu, three Gods in Balinese mythology. Breathtaking mountain views and vast rice paddies roll out before you. This holy temple narrowly escaped destruction in 1963, when the lava flow from Mount Agung’s eruption only just missed the temple, which only made it more significant to the Balinese people.

Location: East Bali, about 50 kilometres from the capital, Denpasar. 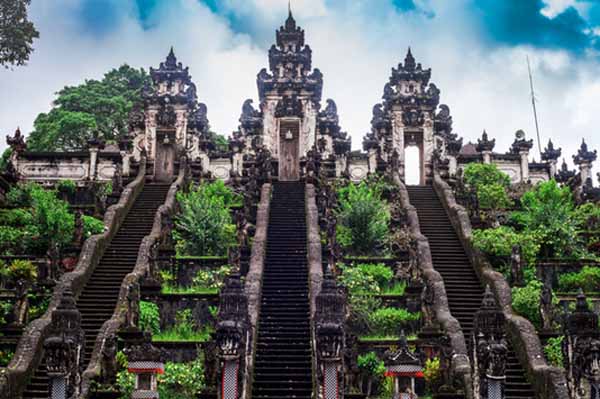 Even though it’s a mean feat to reach the top of this temple, Lempuyang Temple is one of Bali’s most important religious and picturesque places. It is one of the island’s nine directional temples that protect the native spirits from the evil spirits.

To reach the very top of the five levels, there are 1,700 steps to work your way up, but the first level is just as amazing and easily accessible. As you walk into the first opening, the large traditional gateway frames the notorious Mount Agung and because of the high altitudes the view is stunning. There are attendants who will capture your photo with the mountainous background, but sometimes there is a queue.

For those who can, take the extra hike to the very top, get to the summit and conquer the 1,700 steps, the effort is all worth it.

This picturesque temple is situated on the shores of Lake Beratan and comes second only to Puri Besakih in significance. This temple is dedicated to the worship of the goddess of lakes and rivers, Dewi Batari Ulun Danu. It was built in the 17th century, however after being destroyed by two earthquakes, in 1930 it was moved to its current location.

You’ll often see ceremonies here, with offerings made by the farmers. Lake Beratan which is its location is the source of many springs which send much-needed water to other parts of Bali. This temple is important to the rice farmers, in their eyes, it is the primary temple that protects the subak irrigation system.

Some of the temple sits on the mainland, while a major part of it seems to float on the lake. 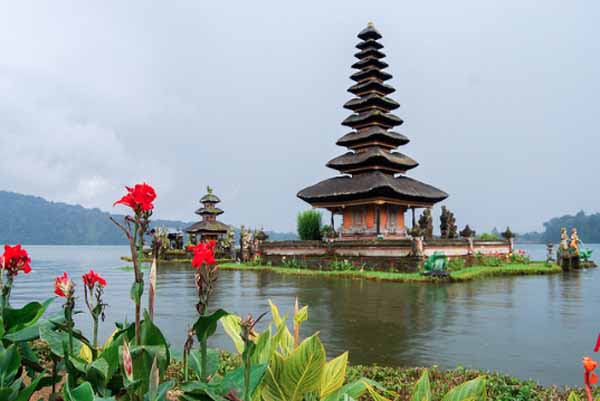 The grounds surrounding the temple include the Bali Botanical Gardens, which is the largest of its kind, in Indonesia. You’ll also find the Bali Treetops Adventure park here. 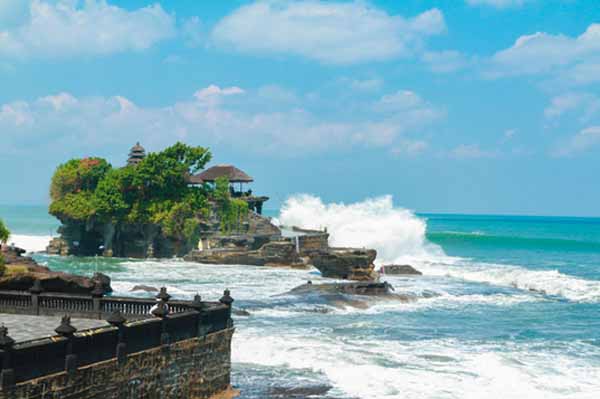 I love visiting this temple and I’ve lost count of how many times I’ve been. Depending on when you arrive the outlook is always different, but it’s always one of the most scenic. Dating back to the 15th century, the Tanah Lot Temple with its multi-level pagodas, sits on a rocky outcrop and is only accessible in a low tide. It’s also one of the directional temples and in 1990, a massive restoration effort saved it from falling into the sea.

The locals believe the temple is protected by small poisonous sea snakes as well as one giant snake.

Its name simply means, “Temple of the Sea” and whilst visitors cannot enter the temple grounds, arrive on any auspicious day and you’re certain to come across a colourful ceremony. The women wade through the water carrying baskets of offerings atop their heads and it’s always a race against the tide.

Deep below in caves, holy snakes can be viewed. If that’s not your thing just go for the view, it’s definitely worth it.

The best time to visit is at sunset when the late afternoon welcome allow you to sit and enjoy a meal and a cold drink. 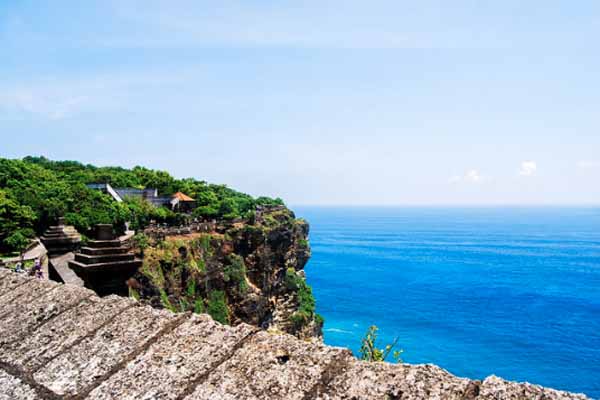 Located on the edge of steep cliffs, Uluwatu Temple is known for its stunning views of the Indian ocean, especially at sunset. It’s situated high, 60 metres above sea-level on the most western part of Bali, Uluwatu. The temple was originally built by a Javanese Hindu priest in the 11th century and is one of the nine directional temples. 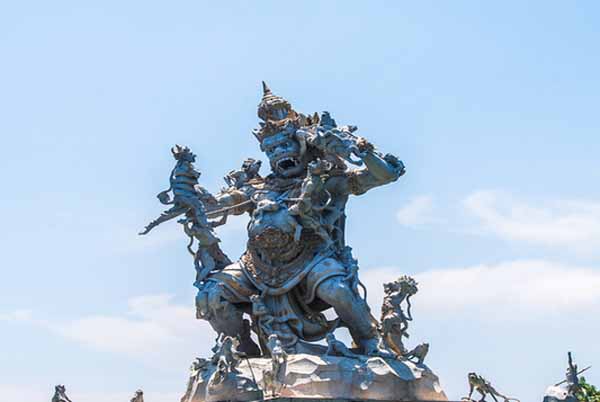 As you walk throughout the temple you’ll come across families of monkeys who reside in the compound. Just watch your belongings and go along your way, they’ll leave you alone.

Uluwatu Temple is revered by the Balinese people and also the site of a nightly performance of the Kecak dance. The traditional Balinese fire-dance is a re-enactment of the epic Ramayana story through dancing men, masked actors and a very dramatic fire dance, and dates back to the 1930’s.

Location: On the Southern tip of Bali, 30 kilometres from Denpasar.

Everything You Need to Know About Bali

Considering a Move to Bali